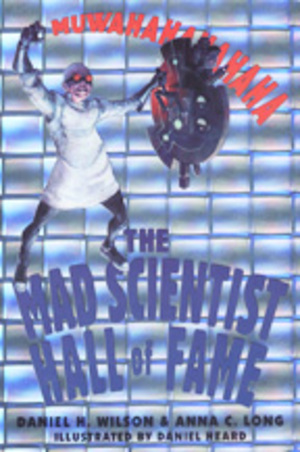 Another guest review from GeekTeen John Ceceri (with help from Mom) on yet another new book by the prolific Daniel H. Wilson:

Have you ever wondered why Doctor No wanted to rule the world? Or how a lawsuit made Philo Farnsworth paranoid? It’s all in the new book The Mad Scientist Hall of Fame by Daniel H. Wilson (author of How to Build a Robot Army) and research psychologist Anna C. Long. Inducted into the Hall are scientists from many disciplines and from every category of popular culture. You’ll find Marie Curie rubbing shoulders with Superman’s Lex Luthor and Futurama’s Hubert J. Fansworth. (Dr. Horrible is not among this list.)

The book is not only a guide, but also a psychological review of each scientist, real or fictional. Each biography includes possible disorders, influences in the scientist’s life, and, in some cases how to cure them. But despite the title’s implication, not all the scientists included in the Hall of Fame would qualify as “evil.” For example, Nikola Tesla, Thomas Edison’s rival in the early days of electricity, may have been eccentric, but there’s no evidence he was out to destroy the world. And any mayhem caused by Professor Calculus in the Tintin comics was more likely due to hearing loss than malicious intent.

The amount of information on each scientist is surprisingly extensive. For instance, there is a lot of background history on characters like Jules Verne’s Captain Nemo and Robert Louis Stevenson’s Dr Jekyll (which may include details from the movie versions of their stories, as well as the books they first appeared in.) Hall of Fame also has a quiz at the back to see how you would do as a Mad Scientist. It’s divided into two parts: your science acumen and your mental instability.

I liked The Mad Scientist Hall of Fame, but I’m not sure the book is suitable for young kids. For example, in the chapter on Stanley Milgram – who ran tests on how much evil someone would do if an authority figure told them to — there are detailed descriptions of violent torture. (It even explains how he faked the screaming when the subject electrocuted another subject.) It was really disturbing to read about how Sidney Gottlieb (who wanted to assassinate Castro with toxin-laced cigars) would poison family and friends and drove a CIA agent to suicide with LSD experiments.

And while the biographical information is fascinating, the psychological analysis can get too serious. It works when diagnosing Dr. Evil as “antisocial” for liquidating his therapy group and killing anyone who disagrees with him, but at other points it just gets too dry. As a teen, I would recommend the book for other teens and maybe preteens as well.

So, the book is not Wilson’s greatest ever, but I think it’s worth picking up. If you like to read up on the exploits of real-life scientists, or get the cliff notes for fictional ones, this book is for you. In the meantime I need to check on my Man-Ape-Robot Project.

John Ceceri is a 10th grade homeschooled robot fan; Kathy Ceceri is author of Around The World Crafts: Great Activities for Kids who Like History, Math, Art, Science and More!

Comics Spotlight on Mr. Negativity and Other Tales of Supernatural Law