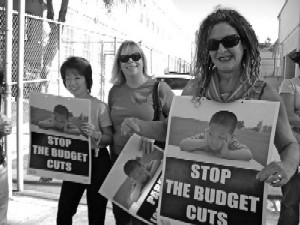 Desperate measures have become necessary.  The inflation of some core items has hit home.  Since I’ll be going back to school part-time in a few weeks  and our budget for food, clothing and gas continues to rise, entertainment and communications are at the top of our family’s cut list.  Here are the actions we considered taking to cut back and how they panned out in reality.

We live in Minneapolis, where you can really get decent municipal wi-fi.  Most of the city has reliable 1MB coverage at a price comparable to dialup.  Transitioning from our bundled coverage was a pretty easy decision, until I realized we have 3 months left on our contract.  Cancellation fees negate any savings until the contract is up.  We did get Qwest to knock $10 off a month on our current service for now.  Internet Verdict?  Wait until November to make the change.

Mrs. GeekDad and I make most of our calls to each other and we only use 350 minutes per month on our Verizon Shared plan.  Even with a 20% employer discount, we are paying $70 per month or 20 cents per non-Verizon minute. We originally got the phones to keep in contact with potential renters.  We don’t really need to keep the phones for that reason now that our renters are more stable.

Phone verdict?  Get rid of them, doesn’t everybody else have a phone we can borrow if its an emergency?

We love our DirectTV with DVR.  Watching the shows you want when you have time to watch has transformed our TV experience.  We watch less junk by flipping channels and rely on the recorded shows on the rare occasions storms occlude  the signal.  But, it’s just TV, right? And entertainment is a luxury at ~$60 a month.  TV Verdict?  Get rid of Pay TV.   Find other entertainment options.

We have plenty of other options to choose from.  Basic cable is less than $15 a month.  Rabbit Ears give poor quality but effectively free. We could download all our content or rent DVD’s.  We could just get rid of it altogether.

I’ve threatened to cut these before but couldn’t quite give up my little luxuries. This time I canceled our phones and DirectTV.  It felt good.

Then I told the kids that the DVR was going away.  They would have preferred to cut the food budget (probably my food)  After the wailing and gnashing of teeth subsided, I told them we would be getting NetFlix and they could choose some shows on the list.

And then tomorrow came.  Verizon and DirectTV called me back. I totally caved.

The reality of life without those little handsets sunk in when a truck snapped the trunk phone line for our block the day I was canceling cell service.  The landline is on the chopping block now and I got a rate reduction without having to extend the cell contract.

DirectTV offered a $250 credit to continue service, months of free Premium channels, and the DVR would be free. I can handle paying less for more. Besides, I wonder how our kids could continue their roles as Mini-Mythbusters without new episodes.  They adapted Shark Week to the yard.  With few sharks to repel or attract, they chose pit bulls.

Final Verdict? I did achieve some minor cost reductions, questioned some spending habits and can still pause my TV whenever I want.

Driving Home for the Holidays