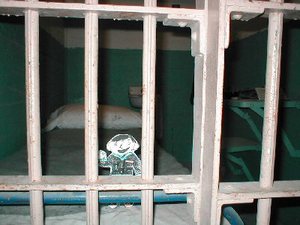 Is it true?  Could this favorite two-dimensional, globetrotting, camera hogging, celebrity-consorting, children’s book character really be going to The Slammer?  The Big House?  Well, fortunately that’s not going to happen.  But that doesn’t mean the little guy isn’t in a mess of controversy and courtroom drama.  I would have put up a photo, but you know how it is- they don’t allow cameras inside.

I happened to notice an article in my local newspaper (yes, I still read papers old-school style on dead wood instead of online- at least on weekends) that brought up the plight of London, Ontario teacher Dale Hubert.  While Jeff Brown was the author of the Flat Stanley books, it was Hubert who picked up an old copy of a then obscure book, came up with the idea of having kids in his class color and mail out copies of the Flat Stanley character to other kids who would contribute to a written journal of Flat Stanley’s adventures, starting what would become the Flat Stanley Project.

Since 1995, Hubert has run the not-for-profit Flat Stanley Project, including the flatstanley.com web site and seen the popularity of his effort grow into a worldwide phenomena.  People, mainly kids, send in photos of Flat Stanley posing at various landmarks (including the accompanying Alcatraz photo) and shots of celebrities and cultural figures posing with the cutout.  Hubert even received the Prime Minister’s Award for Teaching Excellence in recognition for his work.  Author Jeff Brown was supportive of the Hubert’s efforts (after all, it meant significant increase in book sales for him), but when he died in 2003, things started getting dicey.

Given the expanding popularity of Flat Stanley (a musical was produced in 2007 and Universal has apparently bought movie rights to the character), the Brown estate wants that flatstanley.com domain -which Hubert owns.  They’re willing to let the Flat Stanley Project continue on a different site, but this entity would be profiting from all of the traffic and recognition that Hubert has built up, leaving him out in the cold.  And somehow I doubt that literacy, travel and pen-pal activity will be the focus of any commercial effort.

This doesn’t sit right with me and I shudder to think of what Hollywood, corporate branding and a marketing blitz could do to a grass-roots, classroom-friendly effort like the Flat Stanley Project.  To be fair, this legal mess isn’t entirely one-sided; Hubert himself filed for a trademark on Flat Stanley in 2006, which further complicates matters, but it seems to have been a defensive move done on the advise of a lawyer.

If you want to scope the situation out further or just peruse the hundreds of photos, visit Hubert’s flatstanley.com before it morphs into yet another merchandise-flogging site.  Better yet, send him a supportive e-mail along with an interesting Flat Stanley photo for the collection.

A Few Notes About Our New Site Design