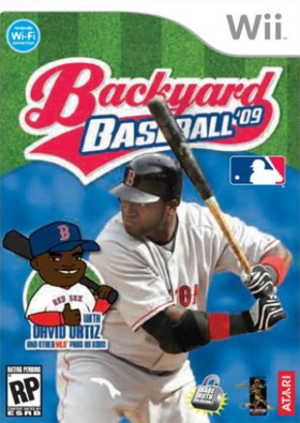 I was sent a copy of Backyard Baseball ’09 for the Wii to review. You want to know what I do when I get a free copy of a game to review? Do I spend hours working my way through every minute of gameplay? Do I push it to the limits, marking down every small graphical hiccup and long load time? Do I play it to the end to see just how complete it is, and whether it’s worthy of my blogerly attention?

I give it to my kids to play.

And I have to report that within a dozen minutes of starting Backyard Baseball ’09 for the Wii, my kids were having a lot of fun.

Now no one is going to mistake this game for one of the MLB or NCAA series of baseball simulation games.  The graphics are not high-res, and the gameplay is quite a bit more arcade-style than accurate, but you know, sometimes that’s just what you want.

Indeed, the easy description is that BB09 hits a sweet spot in between the MLB games on the high side, and the baseball game that comes as part of Wii Sports. The characters in BB09 are, for the most part, kidified versions of many current MLB players, with a few other kids as well (one thing I really like is that a number of the playable characters are girls, who can hit and field just as well as the male characters), all rendered with just a few steps more accuracy than the Miis one generates for the Wii

Gameplay is a level up from Wii Sports as well — all the normal aspects of videogame baseball are included, with most of the usual control systems. An arcade-style addition is special power-shots, based upon some hard-to-fathom earning system, where the pitcher, hitter, or both can earn a super-shot with often humorous results. On top of the Meteor pitch or Orbit hit, each of which results in extraordinary power, there are slime balls, and literal splitters, and disappearing vapor balls, and more, each of which makes hitting or catching a ball more difficult. They add amusement, and a small piece of strategy to the game.

The variety of venues is fun, from a true back-yard to a Field of Dreams-style farmyard field with a flying saucer in the distance. On the downside, once you pick up on the timing of the pitching, getting hits is easier than in the more sim-like games, but for family-play that’s not necessarily bad. As Dirty Harry might have said, a game’s got to know its limitations. And the use of the Wii controllers isn’t all that extensive; motion control is less than Wii Sports, making it more a game of timing than anything else.

In the end, BB09 is what it is: an arcade-style baseball game tailored for family play with younger kids. If that sounds like what you need for your gaming situation, then this is a title to pick up. If that’s going to bore your teen power-gamers, then don’t. All I can say is that in my household with an 8-year-old and a 10-year-old, this title is going to get more time at the plate.

What’s With Watson’s Weird Bets? And Other Questions About IBM’s Jeopardy-Playing Machine