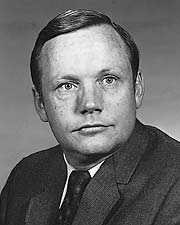 Thirty-nine years ago, on July 24, 1969, three ultra-geeks returned to Earth from the ultimate geek-project: landing on Luna, Earth’s moon.  Their mission was called Apollo 11.  This day commemorates the safe return of the crew of Apollo 11 to Earth after traveling half a million miles (more for Collins) for eight days.  In commemoration, we salute the first man to walk upon Luna, the mission commander of Apollo 11, Neil Armstrong.

Armstrong was born on August 5, 1930, in Ohio.  He flew in a Tin Goose at the age of six and was smitten with flying ever since.  He left Purdue University to fly 78 combat missions in the Korean Conflict.  After the Conflict he returned to Purdue and finished his bachelor’s degree in 1955.  His introduction to NASA was through flying the X-15 as a civilian test pilot.  In NASA, Armstrong was a member of both Gemini and Apollo programs.

In Gemini, Armstrong and David Scott flew the Gemini 8 mission.  The mission included the first successful docking of two spacecraft in orbit.  Unfortunately a malfunction in the maneuvering control system forced the craft to experience increasing roll and yaw rates which forced Armstrong and Scott to abort the mission before they were able to accomplish additional mission objectives including re-docking and an EVA.

Supposedly, the original choice for commander for the Apollo mission which would first land on the Moon, was Gus Grissom.  Grissom had been a veteran of the Mercury and Gemini missions, but died on the platform during the disastrous plugs-out test of the Apollo 1 mission.  I cannot find on the Internet any reason why we don’t celebrate his birthday, or Neil’s for that matter.

(source: Worldbook at NASA, From the Earth to the Moon)

More Tools for Getting a Geek Running

Eureka — I Have (Finally) Found It!