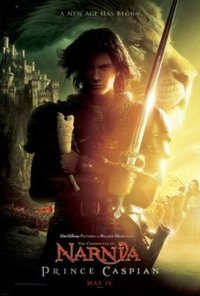 The Neumeier family went on opening night to see Prince Caspian.  I went to work early, so I could leave early in order to make sure we got to an early showing of the movie. (Can you tell we really wanted to see this movie?)  The excitement around our house has been building for weeks on this one.

Prince Caspian, like the first Chronicles of Narnia, is visually stunning — from the locations where the movie was filmed, to the sets, to the costuming.  The actors and actresses, musical scores, and Aslan’s voice all contribute to the continuity.  The four Pevensie children have been back in London a year in the storyline, and while the younger two children have matured, you get the sense you’ve just left them at the end of the last movie.

Without giving spoilers, we were comfortable bringing all of our children (including one as young as six) to see the movie.  This movie is much more violent than The
Lion, The Witch, and The Wardrobe due to the storyline being the war between the Telmarines and the Narnians.  However, as in the first movie, the battle scenes are not blood-soaked gore-fests
(like, say, Braveheart).

Andrew Adamson, the writer and director, did push a bit on this movie compared to the first.  He said in an interview, “This film is probably a little darker and grittier than the last one, partly because the children are older, making the story more adult in nature.”  This also comes through in the movie dialogue where the dwarf Trumpkin warns Peter, Susan, Edmund, and Lucy “You may find Narnia a more savage place than you remember.”

In the final battle scene, there are some spectacular special effects, and it is reminiscent of portions of The Lord of the Rings stories and movies.  You can tell that C.S. Lewis and J.R.R. Tolkien were part of the Inklings.
It also makes you wonder how much Andrew Adamson was influenced by
Peter Jackson.

Even with the violence, the positive aspects of the movie — a great storyline, the sense of old-fashioned heroes who put others before themselves, and a willingness to sacrifice personal comfort and gain — is something we don’t see too often in movies any more that the whole family can enjoy.

The entire Neumeier family gives Prince Caspian a hearty two-thumbs up and have unanimously decided to buy it on DVD the day it is released.