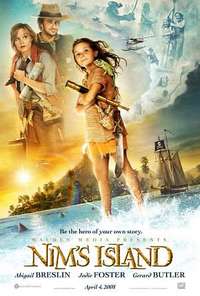 Two thumbs up on Nim’s Island from this GeekDad and his 9-year-old female geeklet!

There are geeky movies, and there are movies that embody a "geek spirit" if you will. Nim’s Island is definitely one of the latter. Jack Rusoe and his daughter Nim are modern geekdad and progeny. If you’re keen on seeing this but don’t mind some story spoilerage, then read on.

The story arc is pretty typical soupy fare: motherless pre-teen daughter lives in world of her own making (literally and figuratively) with preoccupied widowed Dad and must fight for her world against an outside threat until a savior character comes to the rescue and they all live happily ever after. Yup. Seen it.

But in this case, Dr. Jack Rusoe and his geekling Nim have retreated to their own remote island and there live in a geek-family paradise. Their home is basically an elaborate self-crafted tree house powered by solar panels on the roof complete with satellite phone and internet connectivity. Nim spends her time in the numerous books she reads and playing with her animal friends while marine biologist Jack collects and studies specimens of nanoplankton, writes the occasional article for National Geographic, and provides remote scientific advice via email. OK, I don’t have to see any more, I’m hooked.

Nim and her Dad’s paradise is interrupted by an ill-timed storm while Dad is out on his sailboat collecting samples. Stranded in a damaged vessel and blown off-course, Dad must find his way back to the island. Nim meanwhile waits at home and strikes up an email correspondence with Alex Rover, her favorite adventure writer/hero, who is looking for information on volcanoes. Alex, it turns out, is really Alexandra Rover (Jodi Foster), an agoraphobic writer living in San Francisco who frequently speaks to her alter ego–gritty adventurer Alex. He convinces her to venture to the island to help Nim and we trace her journey of losing the familiar while Nim does the same waiting for her Dad and fending off the invading tourists who set up their little vacation spot on the island.

Eleven-year-old Nim, played by Abigail Breslin of Little Miss Sunshine, is great as plucky Nim and totally at home in the role. She is a great aspirational character with a can-do, never-say-die drive. She has a passion for books, shows cleverness as she crafts crude slingshots–taking her inspiration from the ancient Greeks of course–and fights for her home from the evil tourists of the "pirate" ship Buccanneer. She shows strength and determination as she scales the slopes of the island’s sleeping volcano, all the while demonstrating complete fearlessness running around barefoot island-wide, complete confidence in starting fires and repairing her home’s solar system, and stewarding her island’s natural balance by protecting baby sea turtles. All the qualities a good modern geekkid should have.

Dad Jack (Gerard Butler of 300) is the classic DIY geekdad. After getting blown off course with no sail or mast, he cannibalizes his boat and hacks his bilge pump to create a crude air foil/fan for propulsion. (Yeah, one of Nim’s animal pals, Galileo the pelican, brings him food and drops his tool belt in his lap. But hey, a guy needs his tools.) Scientific mind, spur of the moment problem solving, desire to make his unique mark on the world, and full confidence he will achieve his goals. All the qualities a good geekdad should have. After watching him in action, my daughter said to me, "He seems like your kind of guy." I love you too, sweetie.

Overall, the film is infused with a great DIY, can-do spirit. All the characters exhibit the necessary qualities to be "heroes of their own life story" as adventurer Alex Rover says. If that doesn’t embody the geek spirit, I don’t know what does. A good film for Dads of all stripes and their offspring.