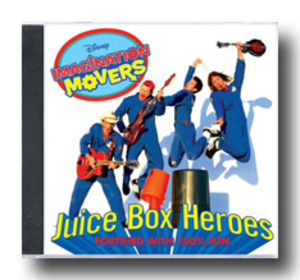 If your geeklings enjoy Playhouse Disney, then they are no doubt fans of New Orleans-based kid’s music powerhouse Imagination Movers. Amy Cottrell of Geek Parenting is currently hosting the site’s first ever giveaway contest, with the prizes being five copies of the band’s cleverly titled CD Juice Box Heroes.

Walt Disney Records has now released JUICE BOX HEROES, a generous kids’ menu of seventeen of the IMAGINATION MOVERS’ most popular music hits, including satellite radio chart-toppers such as "I Want My Mommy" and "Farm."

To enter, simply add a comment to the appropriate blog posting over at Geek Parenting before Wednesday, April 9th, and be sure to check out the Imagination Movers web site for more info on the group.

Hat tip to my pal Matt for the link.