While “Hellboy” is based on the comic book by Mike Mignola, it is not your usual “comic book movie”. Although it is rated PG-13, it is not necessarily intended as “family entertainment” in the way that the X-Men and Spider-Man movies are. So, I thought I’d sit down with the pup and watch it with her. Now, for the breakdown. 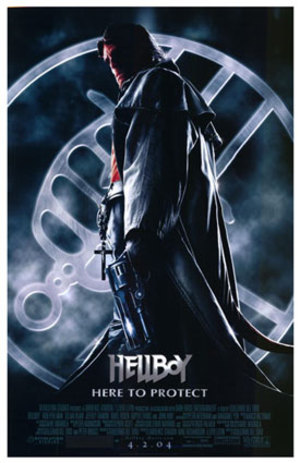 Sex: non-existent. Liz (Selma Blair) and Hellboy (Ron Perlman) kiss. She appears to be wearing nothing under the cloth when Rasputin is about to sacrifice her, but there’s nothing provocative.

Violence: “Hellboy” does feature a lot of violence. People, not just monsters, are beaten and even killed. However, there are no close shots, or sickening sounds for the most part. I would put it at the upper end of violence that people usually watch with their eight to twelve year-olds. Younger than that, and you may want to see it without them first and see what you think.

Horror: “Hellboy” can be fairly scary, and even gory at times. It’s a Guillermo del Toro movie, after all (when the geeklets are asleep, slip in “The Devil’s Backbone” or “Pan’s Labyrinth” for some real treats!).

Values: “What makes a man?” For my geek-pup, this movie holds a special place in her heart. Like Hellboy, the pup too is adopted. Unlike other adopted comic-book characters, Hellboy’s inner conflict and turmoil between his nature and nurturing is not white-washed away. In Hellboy, the pup sees a very meaningful struggle and resolution.

Conclusion: it’s our favorite video to watch together. Daddy gets to watch one of his favorite directors, daughter gets to watch a character who she can readily identify with kick the snot out of the wicked. Can’t say “boo” to that.

Personal note: our favorite scene is when Hellboy and Liz discuss their relationship. I like Ron Perlman’s beautiful performance as he laments his body image issues (“If I could just get past this…”) and the pup likes his promise: “I’ll always look this good.”