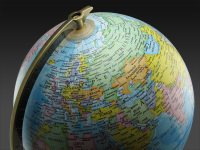 Have you ever looked at a globe and thought "I really wish I could use this in the dark?"  Neither have I, but now we both can do just that anyway.  The Celestial Globe from ThinkGeek looks just like your basic tabletop globe, with up-to-date (to the best of my knowledge, anyway) and well-marked geographical data, axial tilt, and such.  But turn out the lights and a sensor on the globe’s base turns on blue LEDs inside the globe, revealing a map of the night sky, with constellations and the Milky Way drawn in.  It’s bright enough to serve as a muted night-light, but not bright enough that you won’t want to look at it. 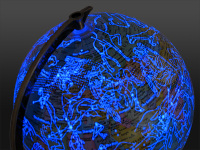 The only disadvantages of the globe that I can see are that, for obvious reasons, it needs to be plugged in (and its cord is a bit short, though that’s probably to make it less likely to be tripped over), and that, if you put it in your kid’s room, you run the risk of them getting up to play with the glowing globe when they should be going to sleep.

(In the interest of full disclosure, I should note that this globe was sent to me as a sample by ThinkGeek.  The review contains only my honest personal views, and I have received no compensation other than the sample itself.)