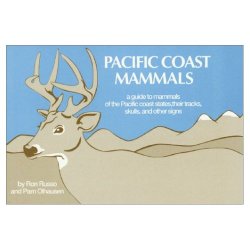 Sometimes it’s difficult to get the Geeklet thinking about the environment. He’s a city kid, born and raised near downtown San Diego, a place so artificial it takes an hour drive just to see a dozen trees at once. This (plus Geekdad influence) has produced a child more interested in building Lego than birdwatching.

So how do we get his attention? How do we teach him that "nature" isn’t just some abstraction to read about protecting? We take him for that hour-long drive out to the forest (or Southern California equivalent), and we take out a little gem of a book called  Pacific Coast Mammals.

Now if I was promoting this book, I would have called it "The Handy Pocket Book of POOP AND SKULLS," but I’m not really known for subtlety.  They actually do say "skulls" on the cover, but the poop part is referred to as "other signs." Whatever you call it, it’s the road to Geeklet fascination. Page after page is filled with pictures of different animals, their skulls, their tracks, and their scat, with descriptions of what they eat and where they’re likely to be found.

The book covers a whole host of animals, from the mundane (squirrels) to the terrifying (mountain lions!) so there’s almost always something to identify on a walk. The extra bits of information help spark discussion about which animal it might be, what they usually eat, and how that ended up in a little pile on the trail. After a while, even random poop sightings at home become something to discover; could this be from a raccoon, or a housecat? Best of all is that awareness that comes from seeing animal evidence all around us, and thinking more about how we all eat, we all leave our mark on the Earth, and… well… everyone poops.