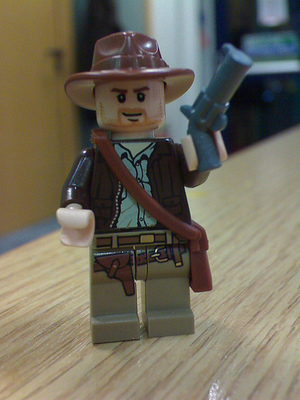 Coinciding with the upcoming fourth Indy movie, Indiana Jones and the Kingdom of the Crystal Skull, look for a lot of cool LEGO Indiana Jones products to come out this year.

In January, LEGO debuted recreations of epic scenes from (two of) the original movies.

7620 Motorcycle Chase: The scene in Last Crusade when Indy and his dad take on (who else?) the Nazis after escaping from Castle Brunwald.

7621 Indiana Jones and the Lost Tomb: The scene in Raiders where Marian and Indy escape from the Well of the Souls.

7622 Race for the Stolen Treasure: Indy races after Belloq on horseback to recover the Ark, which in this revisionist Raiders, is a gold box holding coins and jewels, rather than a holy artifact holding sand and assorted face-melting apparitions.

7623 Temple Escape: The beginning of Raiders where Indy recovers the golden idol, only to lose it to Belloq. There’s a Jock minifig with a fishing pole, airplane and snake, a Belloq minifig, even a wee golden idol.

(Those unfamiliar with the trilogy may wonder why the second movie went unrepresented.) In May, and in conjunction with the release of The Kingdom of the Crystal Skull, four more sets will debut:

7624 Jungle Duel: Uh, looking at the box I’d say somebody bum rushed Indy’s camp and cut his table in half with a sword.

7625 River Chase: Indy escapes from some baddies in a car-boat!

7627 Temple of the Crystal Skull: a 929-piece monster set with skeleton minifigs, natives, Russians, and a giant temple.

If you love LEGO Indiana Jones, don’t forget to check out Indiana Jones and the Raiders of the Lost Brick, a four-minute CGI mini-movie premiering on Cartoon Network on May 10th at 9 p.m., or viewable online after the broadcast. In addition, CartoonNetwork.com will offer three levels of a LEGO Indy game starting on April 28th, one level per week. And on June 3rd, the video game LEGO Indiana Jones appears in stores. Recreate scenes from the original three movies, master the iconic Indy whip! Interestingly, Nazis won’t be found in the game (nor the LEGO models, by the way) instead being replaced by basically identical beige-wearing goons.

Disney Channel’s Fish Hooks: Be Sure to Catch It (Tonight)!