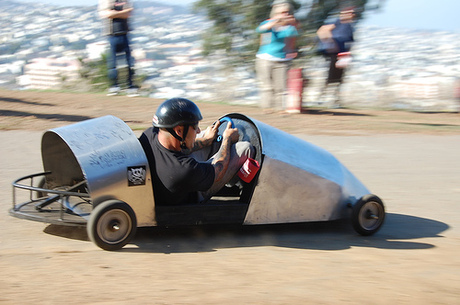 Hello race fans! Indeed it’s true: I was on hand last weekend for the annual running of the Illegal Soapbox Derby Races at Bernal Speedway, high above the city of San Francisco. 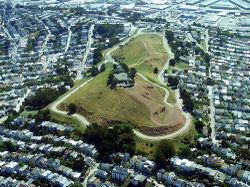 Here’s a view of the Speedway as taken from the Telstar Logistics blimp:

The Illegal Soapbox Derby is a venerable Bernal Heights neighborhood tradition that’s been going on for more than a decade — or longer, depending on how you want to count. It’s a purely ad hoc affair in which heroic racers brave life and limb in gravity-fueled race cars. While not explicitly for kids — many of the racers are gearheads, members of motorcycle clubs, or hot rodders — the scene is extremely kid-friendly. (David Sifry agrees!) The competition is playful and the "heats" are notoriously disorganized, but the racing is good clean fun. The vehicles range from the Fast and the Furious to the Crude and the Clunky.  All are welcome, but the Illegal Soapbox Derby Society enforces only one iron-clad rule: Every car must have a beer holder. 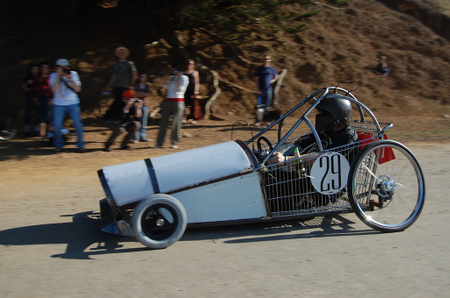 I’ve been attending for years, but my shameful silence on this blog in recent weeks owes much to the fact that I’m now, officially, a New GeekDad — our daughter was born 3 months ago. That means this was her first-ever Illegal Soapbox Derby! Alas, she slept through the entire thing while chillin’ in the bjorn.  Not a problem; I vowed to build her a race car for next year. 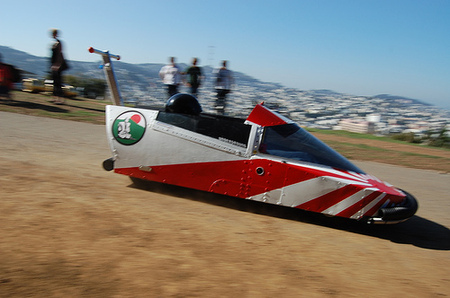 In the meantime, I’ve posted lots more pictures from the 2007 Illegal Soapbox Derby, and there’s also a great video of the day’s events available (complete with dramatic wipe-out scenes). See you on the speedway in 2008!