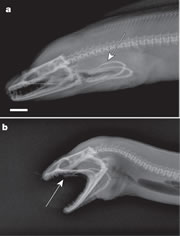 A recent discovery covered in the journal Nature shows how one species of Moray eel use a second moving jaw to secure wiggling prey – just like the creature in Alien (almost).

"… the second jaws, called pharyngeal jaws, lie in wait inside the throat, and then extend forwards into the mouth to grab prey that has been captured by the eel’s main teeth. The morsel is then drawn into the eel’s oesophagus."

I have an affection for Moray eels since it was the animal of choice in my daughter’s Kindergarten science report. I, and she, can still repeat her list of facts: 1) they’re nocturnal; 2) they use camouflage; 3) they’re covered in mucus. Did you also know that the color of a Moray eel comes from their mucus, not their skin, unlike many other underwater vertebrates?