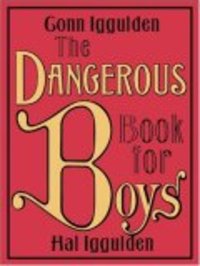 Our own GeekMom, Asha Dornfest, is too modest to mention that she has a must-read interview with one of the brother/authors of the phenomenal bestseller, The Dangerous Book For Boys. From her excellent ParentHacks:

What’s dangerous about this book?

I suppose in the main, it’s the attitude – that danger isn’t a dirty word. It became one in the eighties and nineties and as a result, we overprotected a lot of boys, which did them no good at all.
Including how to make weapons like a bow and arrow, a catapult and suggesting that it’s all right to give a boy a Swiss Army knife is still oddly controversial where once it taken for granted. We also included stories of danger and heroism because boys aren’t being taught them any more – and they should be. We pass on our values through stories and no one wants a generation of soft, pale, chubby boys afraid of their own shadow. There’s the real danger if you like – parental fear can ruin a generation if we’re not careful.

Read it all here.