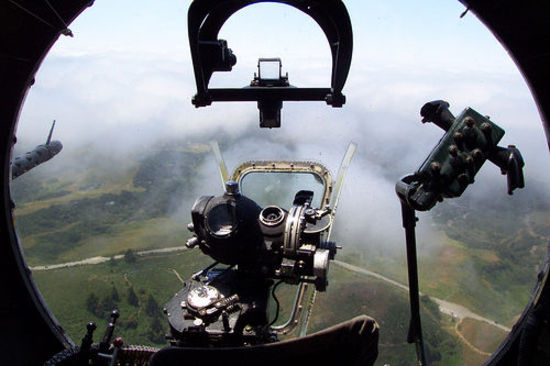 When I was a Geek Kid, I spent a lot of time building plastic model airplanes.  World War II aviation was what I liked best, and of all the planes that flew during the war, the Boeing B-17 Flying Fortress bomber was my favorite — I must’ve built a dozen of the 1/48 scale Monogram B-17 kits.

Because of this, I developed a deep and lasting familiarity with the anatomy of a B-17, both inside and out. What I never fully appreciated as a kid, however, was the fact that a real B-17 was almost as fragile and insubstantial as the plastic kits I built in my parents’ basement. To understand that, you have to see the real thing, up close and personal.

Luckily, if your kid loves building models of World War II airplanes, and if you happen to live in the Western U.S., you may soon have opportunity to see three fully-retored World War II bombers at an airport near you. And not only that… GeekDads and GeekKids can actually go for a flight on one of the planes (if you’ve got a little extra cash to spare).

This summer, several vintage warbirds will traverse the region as part of the Collings Foundation’s 2007 Wings of Freedom Tour, a flying history show that brings three immaculately-restored World War II bomber aircraft — a Boeing B-17G Flying Fortress, a Consolidated B-24 Liberator, and a North American B-25 Mitchell — to airports throughout the Western states. 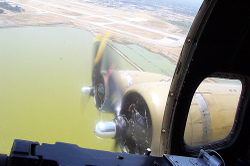 At each stop, GeekDads and their kids can see these aircraft up close, climb around inside, watch them make a few take-offs and landings, or even go for 30 minute flights high above the homes of envious friends and neighbors.

I went for one of these flights in 2002, and it was unbelievably, superbly fantastic.  (That’s when I took these photos, and you can read more about my experience here.)  30 minute flights cost $425 tax-deductable dollars per person.  Visiting the planes at the airport is cheap: $10 for adults and $5 for kids.  Either way, it’s the thrill of a lifetime for any kid who loves to build model planes — and the GeekDads who accompany them.

This week, from May 16 through May 22, the Collings Foundation’s warbirds will be in Silicon Valley, at the Moffett Federal Airfield. (Note that this conveniently overlaps with the Maker Faire, which will take place just 18 miles away.) Later this month. the planes will stop in the California towns of Lincoln, Sacramento, Livermore, Napa, and Concord, before continuing on to the Pacific Northwest, followed by the Rocky Mountain states.
You’ll find the complete 2007 schedule here.