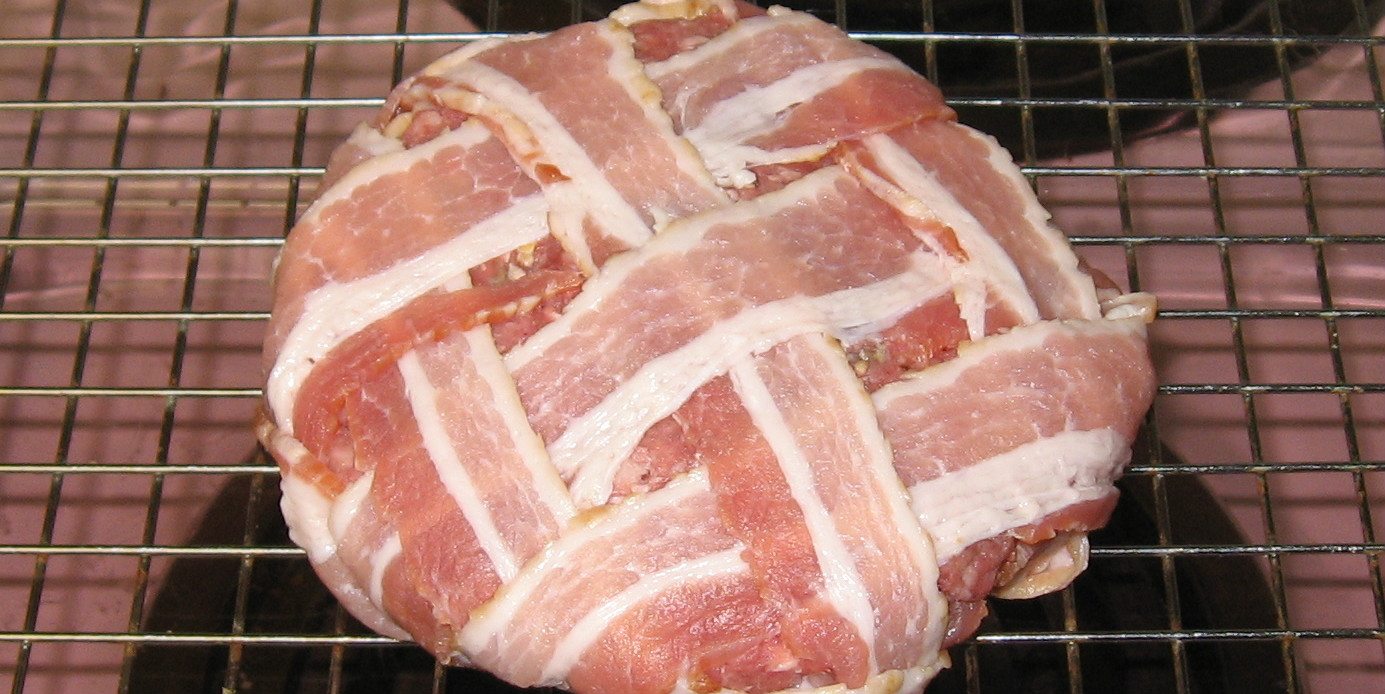 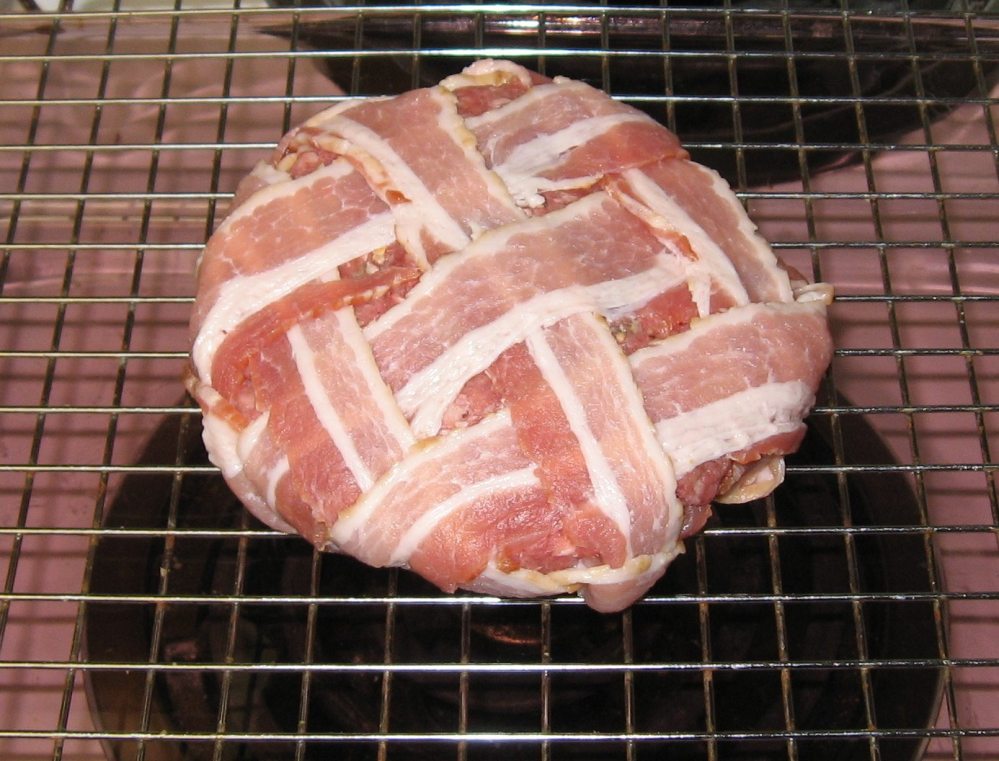 Today is the completely unofficial, but nonetheless awesome, holiday known as International Bacon Day. The holiday, which occurs annually on the Saturday before Labor Day in the United States, was the brainchild of a group of students at University of Colorado at Boulder in 2004. As you’d expect, the holiday celebrates all things bacon, and is best celebrated by making and consuming bacon-related foods and beverages.

I couldn’t let International Bacon Day go by without notice, but sadly there aren’t many celebrations around. I did note that Ford is celebrating the “holiday” by making available a graphics package for the new Fiesta that makes it look like the car is wrapped in bacon.

And now for my own story:

Three years ago, on July 4th — my country’s birthday — I chose to make and consume a hamburger wrapped in ten strips of bacon. Having read of other folks’ bacon-related exploits before, I went to my local Trader Joe’s and purchased uncured bacon. I reasoned that this would have less salt, and therefore be much easier and very slightly healthier for me to consume large quantities of. Before anyone asks, no, I am not going to do side-by-side comparisons of cured and uncured bacon for each recipe — partly because I can’t afford to, but mostly because I may be crazy, but I’m not insane.

I began by putting down some aluminum foil on a kitchen counter, because I didn’t want to have to scrub down the counter afterward to get rid of the raw bacon smell. I created a lattice, weaving five vertical strips with five horizontal. I then placed the perfectly ordinary, roughly 1/3 lb hamburger my lovely wife had made in the center of the lattice. I tried to neatly enclose the burger in the lattice, but the bottom became a bit of a mess regardless. The top looked very nice, though, if I do say so myself (see the picture, above).

I cooked it using my oven’s broiler, the burger set on a rack over a Pyrex dish to catch rendered fat. Burgers of course taste better on a grill, but consider how many flareups ten strips of bacon would create and you’ll see why I chose not to go that route. I had to trim a few of the strips’ ends when cooking the bottom side, because they got a wee bit too close to the heating element and set off all the smoke detectors in my home. At most, though, I cut off a half-strip’s worth (and probably less), so my experiment was not terribly compromised. 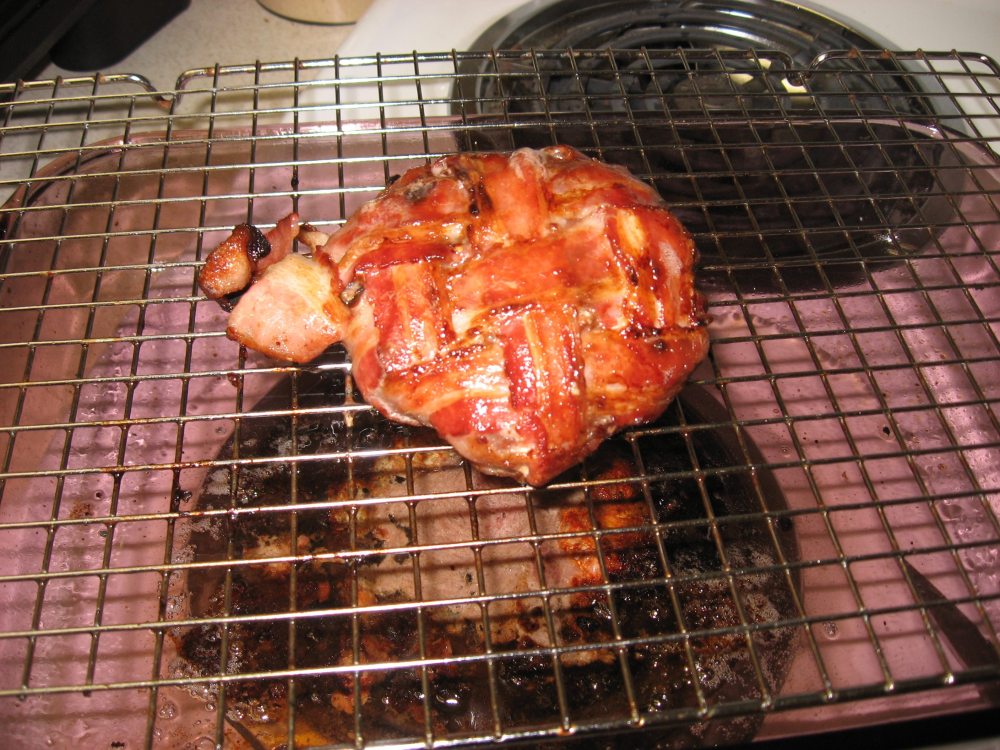 And then I put it on a bun, with an excellent Dogfish Head 90-Minute IPA to wash it down, and I proceeded to eat the whole thing. It was really, really good! The burger was probably the juiciest burger I’ve ever eaten, which I suppose makes perfect sense. Probably due to the bacon being uncured, I was able to stand the saltiness, leaving the richness of the pork fat the only obstacle to consumption. The hoppiness of my chosen beer helped cut the richness of the fat enough that I was able to eat the burger in less time than it took my kids to eat their bacon-wrapped hot dogs. And I even had room for corn and a little dessert afterward. 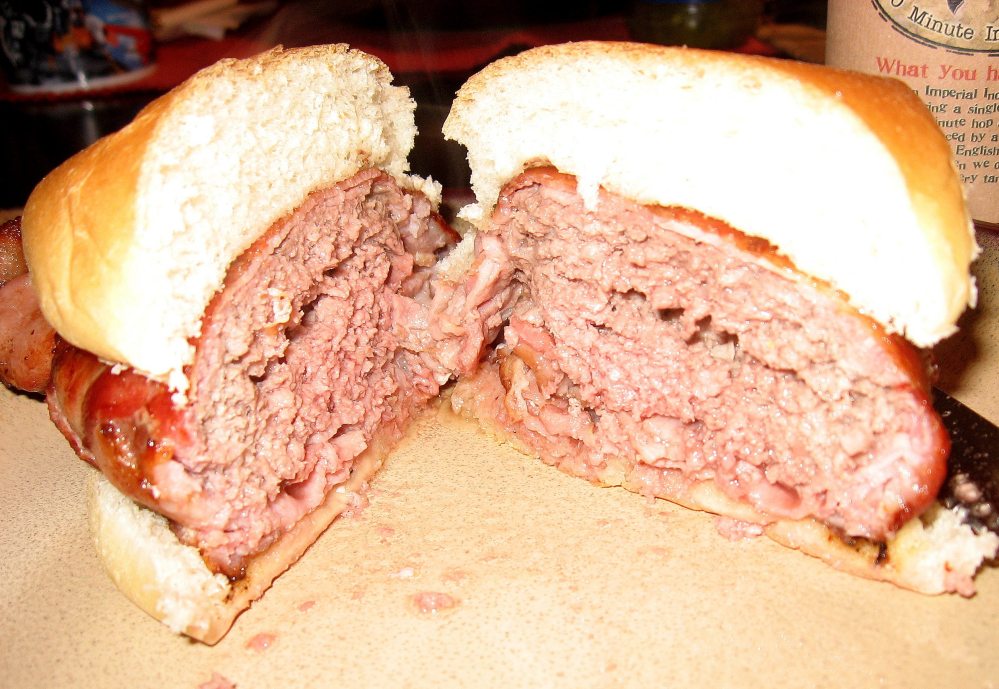 Do I recommend it to others? If your cholesterol level can handle it, sure! It’s really tasty, and not too salty if you get uncured bacon, and (if mine are any indication) you’ll really impress your kids. If you want it to wrap better than mine did, you may want to use more ground beef and flatten the patty a bit more than I did. If you do the former, you may want to have someone standing by with 9 and 1 already pressed on the phone, ready to hit the second 1 when if you have a heart attack.

Nathan Fillion and the Electric Car