I’ve had a number of emails and comments from women feeling a bit left out here, so I’ll take this moment to explain why this site is called GeekDad and not, say, GeekParent, and why we don’t have a parallel Wired site called
GeekMom.

First, just to avoid any misunderstanding, this isn’t about boys vs girls:
this site is about doing cool and geeky things with children of both genders. As you can see in the posts here so far, daughters are as represented as sons.
Girls are very welcome in this club!

But what I, as a dad looking for cool projects and sci/tech things to do with my kids, couldn’t find was something dedicated to the special quality that I find most often in GeekDads–seeing projects with kids as an opportunity to unlock their own inner kid.  Indeed, for a while our jokey draft motto was "Permission to play with cool toys is not the only reason to have children, but it’s up there." 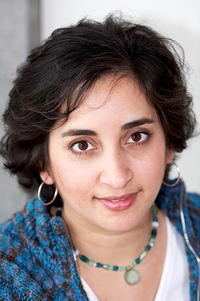 Are there moms who also have an immaturity gene waiting to be let out, seeing kids as an opportunity to play with cool toys, too? No doubt. Fortunately, it’s a big web out there and there’s room for anyone to start their own site. (The domain GeekMom.com is already taken by one such blogger, although she’s struggling with WordPress issues at the moment; GeekDad.com, meanwhile, points here).  In fact, I’ll take this as a reminder to start a blogroll on the sidebar in the next week or so and we’ll link to all the good
GeekMom sites we can find. I’ll go further and say if I see one that’s really good, I’ll invite it into the official Wired Blog Network, meaning that we’ll sell ads for it and drive traffic to it. It’s a Long Tail world–one size doesn’t fit all.

Finally, a slight bending of the rules. I’ve invited Asha Dornfest (at right) of the terrific ParentHacks to contribute a semi-weekly guest post from the GeekMom perspective. She may talk about the challenges of living with a GeekDad, or perhaps on the differences between the way moms and dads approach geek parenting. Or maybe she’s just might want to talk about a cool project, with no gender issues at all. Whatever it is, it’s sure to be terriffic, and if you want more of her than that, you can check her out every day here.

A Google-a-Day Puzzle for Jan. 4