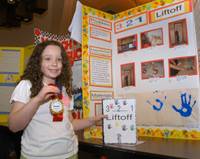 [
Crossposted from Wired Science: Thomas Goetz writes about his own Science Fair experience, which provided an invaluable childhood lesson in the importance of representative samples –CA]

Trolling through Google news, it became apparent to me that it’s Science Fair season…

and everywhere else in the US and Canada.

Call me sentimental, but this warms my heart: all these kids doing their experiments with biofuels and rockets and making their posters.
Science Fair was one of my favorite times of year as a kid – I’d spend all year thinking up different ideas (electromagnetism? volcanoes?
computers?) hoping to make it to the Minnesota State finals. One year,
I got there, with a project on Sickle Cell Anemia.

Like a lot of 8th graders I was fascinated by blood, and so I borrowed a blood test kit from my dad (a doctor) and bought some slides from a local science supply store. I convinced most of my classmates to convince most of their parents to sign permission slips so that I could draw a few drops of blood, put them on slides, and stick them under a microscope and look for sickle cells. I was 12 years old. No latex gloves. No supervision. I did swab their fingers with an alcohol pad first, but clearly, this was long before Institutional Review Boards,
HIPPA, and HIV.

Problem was, I had a bit of a sample problem. Sickle cell, of course, is a genetic disease where the red blood cells have mutated from round shapes into sickle shapes that can get caught in blood vessels, and interfere in oxygen transmission in the blood because of a corresponding low count of red blood cells (the anemia). It’s thought that this emerged as a preventative mutation in populations with malaria – mainly in Africa.
Thus, in the US, the disease is predominant in the African American population. Thus my problem: As a student at a Catholic gradeschool in
Minneapolis, I had all of one black classmate. Thankfully, he agreed to participate in my "study" – and thankfully for him, he did not have sickle cell.

But that meant that my study consisted of a bunch of white kids of
Germanic, Irish, and Polish descent – and one African American kid.
Zero positive results. Not a great study. And as my poster could attest, my skills with Elmer’s Glue and construction paper didn’t exactly make me a budding graphic designer. No surprise, then, that I left the State Science Fair with an Honorable Mention. Still: I was there.

The Artist Ideaboard: A Portable Whiteboard