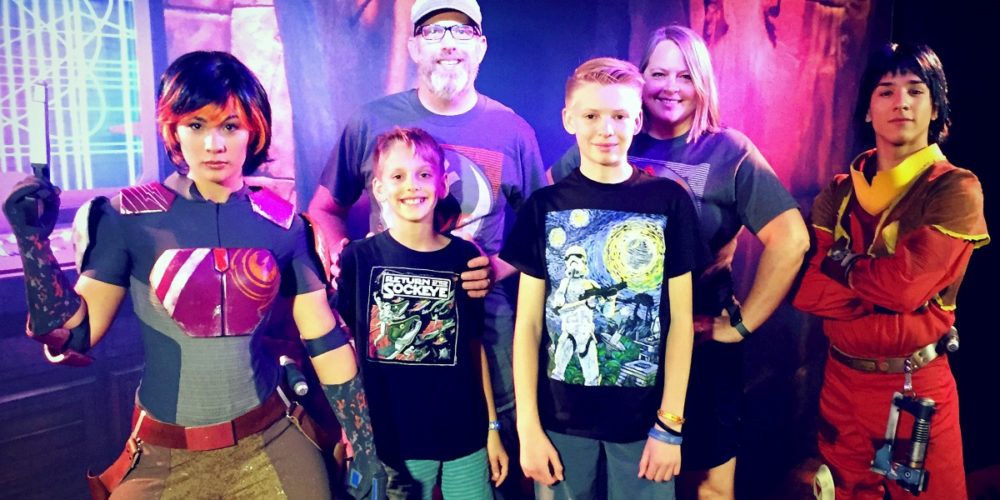 So you’re thinking about sailing with Disney Cruise Line aboard one of their special Star Wars Day at Sea offerings on the Disney Fantasy (there are 7-night cruises through early April to either the Eastern or Western Caribbean, respectively—check website for availability), and you want to know what you’re getting into. Sailor, you’ve come to the right place.

First, you should know that the cruise itself is not all Star Wars all the time—note the “day” in Star Wars Day at Sea; however, during the rest of the week there is plenty of Star Wars merchandise, tons of film and TV show screenings, and enough dedicated fandom to awaken the midichlorian count of even the most casual cruiser.

Also, it’s not like a “normal day” on a Disney ship is anything like real life normal: the entertainment, dining, activities, port of call excursions, crew and amenities, and attention to detail are all off the chart(s). And yes, the popular Pirates IN the Caribbean Buccaneer Blast is still in effect, which means there are two (2) nights with fireworks at sea, something that is unprecedented in the sailing industry, and, I assume, boating in general.

Like most people, many of my philosophies on life are loosely based upon inspirational Yoda quotes, and as my family and I just returned from a Star Wars Day at Sea cruise, it is time for me to heed his wisdom and pass on what I have learned. (Note, I’m actually doing it–none of that trying biz.)

Here’s what happens: you’re in the second half of your cruise, relaxed and varying shades of tan, and suddenly you realize that the Disney cast members you have smiled at for days are no longer smiling back—and they aren’t the Disney cast members you are looking for. The Empire takes over the ship, hassles rebels, and looks for new recruits. Luckily, they still maintain an endless buffet or else the passengers would riot. 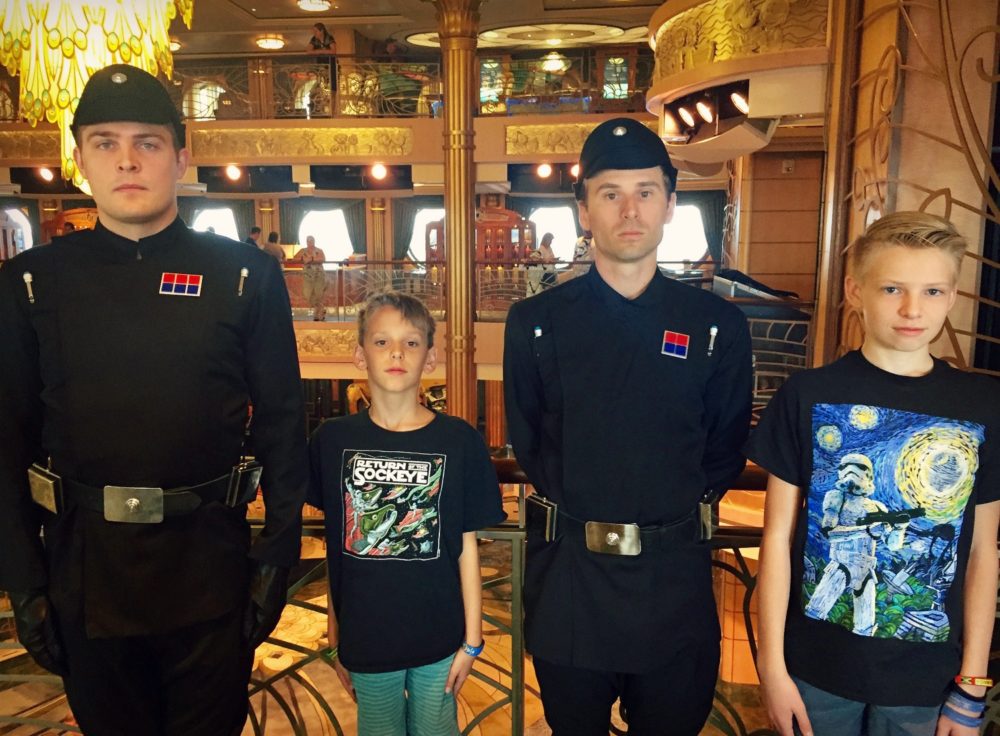 And then there are the ship’s horns, which, to be fair, are pretty special on a Disney cruise anyway, but during the Star Wars Day at Sea, things play a bit differently:

It all gets really crazy after that. There is a lot going on (guests receive a Personal Navigator document in their stateroom each night that outlines the following day’s activities, so everybody knows what is when and where). Here is an overview in video form:

The sailings also offer a Guest Speaker Series. We were lucky enough to have Ashley Eckstein, the voice of Ahsoka Tano on Star Wars: The Clone Wars and Star Wars Rebels (also, Dagger on Disney XD’s Ulitmate Spider-Man), as well as the founder of Her Universe—the groundbreaking fashion, lifestyle, and publishing company made by, and for, fangirls (some of her items debuted on the cruise). 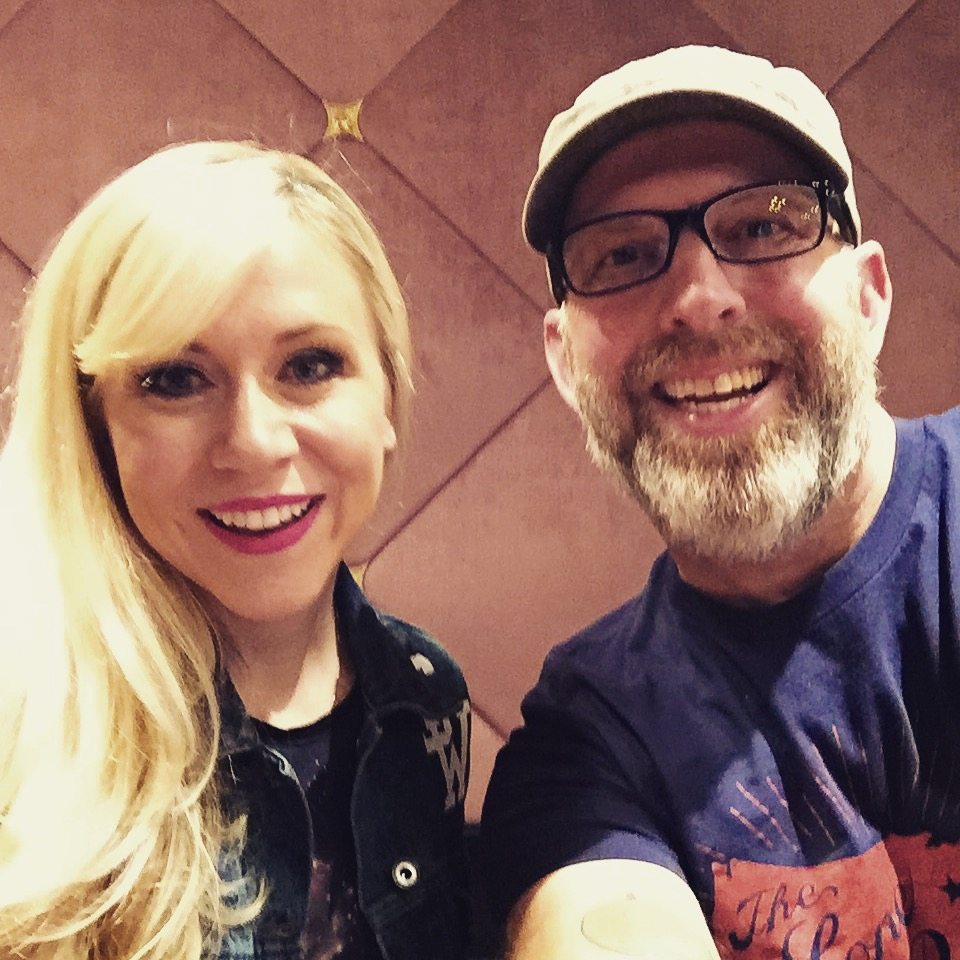 The day winds down with “Summon the Force,” an epic who’s who of Star Wars heroes and villains parading and battling across the stage to the cheers, beeps, and assorted roars of the audience. It ends with the aforementioned fireworks show, a grand finale set to the music of Star Wars, which then transitions into something you can dance to, so we did.

I think what sets the Star Wars Day at Sea apart from other Star Wars events (besides being in the middle of the ocean), something that seemed even more apparent this year, is that nearly the entire experience is geared toward family fun. Yes, there is plenty to keep the hardcore fans happy, but also all the things we associate with Disney in regard to kids and the young at heart. The credit there goes to the people involved in the planning, creation, and delivery of the entire show—yes, they are doing their (awesome) job, but these people are fans, infectiously so. Case in point, here is my conversation with Terrone Carpenter (left), a Show Director at Walt Disney Creative Entertainment:

That’s a guy who loves what he’s doing, and the entire team is equally passionate and invested. It shows, and it is appreciated.

Now for a bit of unsanctioned speculation: In 2016, the inaugural Star Wars sailings were timed perfectly with the release of The Force Awakens, and the 2017 version has the influence of Rogue One, so I feel pretty confident in predicting that the 2018 Star Wars Day at Sea cruises, which have already been announced (yes!), will have plenty of The Last Jedi fun for the whole family. My kids are already pondering the possibilities—it’s like Yoda always says, “Truly wonderful the mind of a child is.” Actual minds may vary.

Until then, sweet dreams and only hopes. 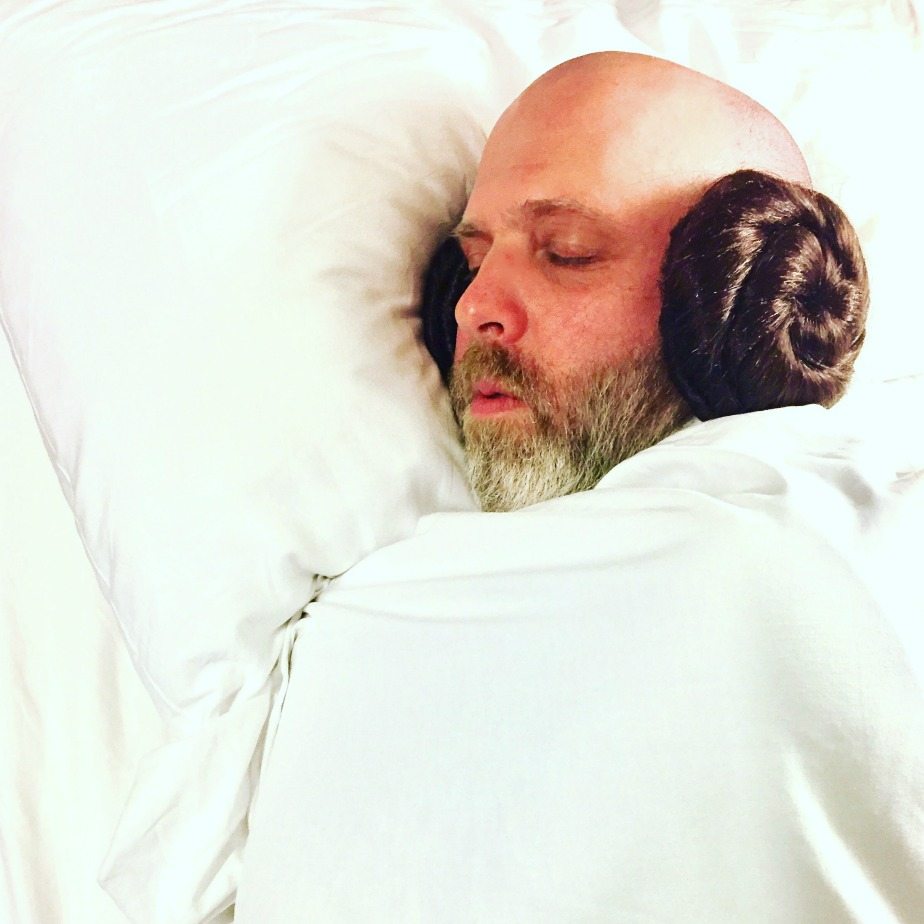 Note: My family and I were media guests of Disney Cruise Line for the Star Wars Day at Sea sailing. All opinions are my own. All photos and Instagram video are by me. Anything that looks professional, namely the sizzle and interview videos, are courtesy of Disney Cruise Line.