Lovers of the Ninth Doctor from Doctor Who have had relatively sparse choices in the world of Whovian fashion, especially compared to other recent Doctor incarnations.

At last, Her Universe has come through for us, and released a Ninth Doctor Dress as part of its Doctor Who line– and it is pretty cute.

Her Universe markets this as a “LBD” (little black dress), with the top front print resembling the Ninth Doctor’s leather lapels and jumper.

The A Line dresses usually contain some spandex, so Her Universe recommends going up a size for those wanting a less fitted look. The $40 price is comparable to Her Universe’s other dresses in the Doctor Who line.

I would love to have seen more “jumper color” choices like red, green or blue, in addition to the purple chosen for the dress, but I’m not going to be too greedy for now.

The fact that there is finally a fashionable way for Whovians to express their admiration for the Ninth Doctor is nothing short of, well “Fantastic!” 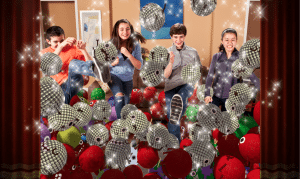