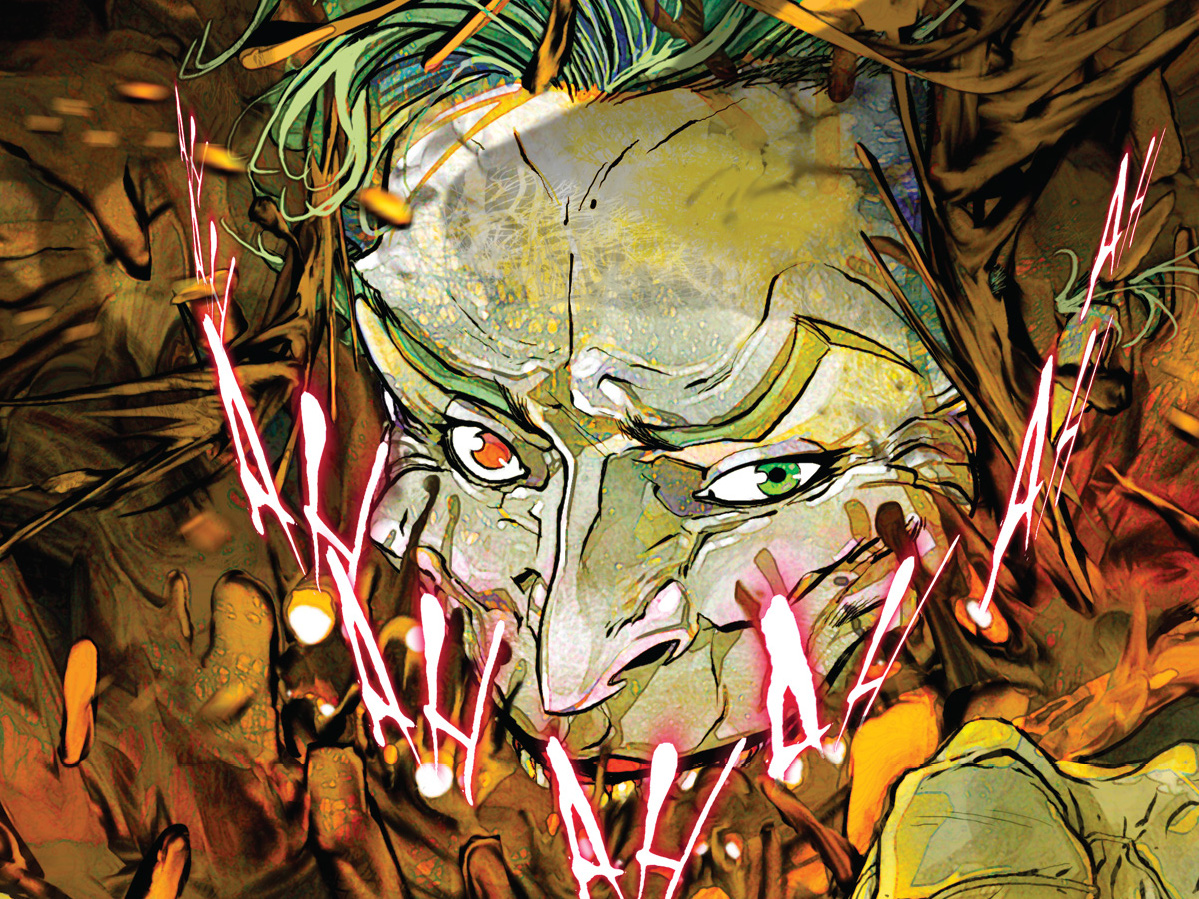 Ray: This is an odd series that doesn’t really seem to fit anywhere else in the DCU at the moment. While most of Batman’s villains are involved in key stories in the main books, Joker is off on his own darkly comic adventure where he’s dealing with an evil LA-based doppelganger. That character isn’t present this issue, so it’s mostly just Joker rampaging through a hospital and being chased by Red Hood. This includes an odd segment involving Joker entertaining a group of dying kids, and even granting an addled old woman a moment of peace (with some odd implications, given the names and ages). It’s not particularly funny, and it doesn’t advance the plot much, which makes it all feel sort of random.

The same goes for the deeply bizarre backup with brilliant art by Francesco Francavilla. After Joker sexually harasses Zatanna, she puts a curse on him with body-horror implications that will likely get quite a bit of play on the internet. Much like other issues, there is no internal logic or continuity here, just a Silver Age pastiche with a much darker twist.

Ray: If it seemed like there was a lot of story to go with only one issue left, there definitely was—which means this final issue is unfortunately a bit rushed. Azrael finds himself against the deranged, scarred warrior Sariel—transformed by a rival cult into an armored killer. Meanwhile, the unstable Father Valley tests his skills against the wild card Vengeance. The highlight here is the surreal visuals as the two cult survivors face off, with Azrael channeling all of his former programming—and rejecting it to take a completely different path. While some people can’t be saved, the end of the issue hints at a potential new alliance and team for Jean-Paul Valley. I feel like with a little more page time, the characters who turn over a new leaf would have been a lot more impactful. Overall, this series did a good job of expanding the mythology of Azrael, but there was so much going on that it often felt like he was playing second-fiddle.

Ray: The final issue of this all-ages take on the Batfam once again has two stories, the first focusing on Harley Quinn—who is still in her villain phase here. She’s broken out of Arkham and rescued her pet hyenas from the zoo, and the Bats are chasing her down using a tip from a loyal Knightwatch member. It’s fine, but the only problem is that… Harley doesn’t really do much wrong besides some animal theft. We’re predisposed to be sympathetic to her after her redemption arc.

The second story focuses on a group of kids who are big fans of the Bat, all of whom have familiar names or appearances. They’re creating their own Bat-comic, and they need a new villain—so they create the Court of Owls. The story expands to include various Bat-heroes and villains, and it’s a fun little tribute to the art of creating. But the stakes are kind of lacking in this whole series, as I’m still not entirely sure what its larger purpose is in the DCU. It might have worked better as a graphic novel.