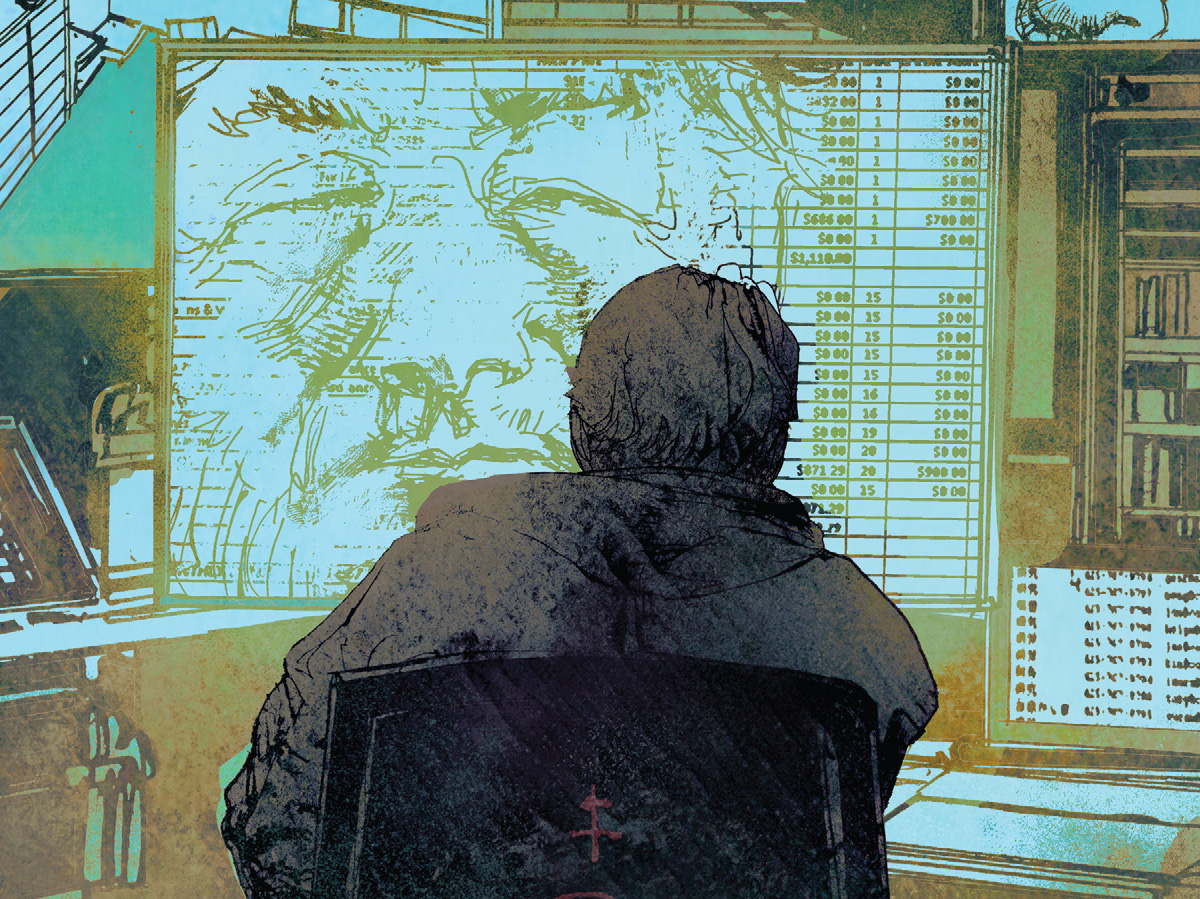 Ray: It’s been a while since we got the first issue of this movieverse-set thriller, with a young Edward Nashton starting down the path to becoming a terrorist. Right now he’s just a young accountant with an axe to grind—and he may have stumbled into a massive conspiracy that his boss would do anything to hush up. While last issue his boss tried to scare him off, this issue he tries to derail him by setting him up with a major new gig—auditing Wayne Enterprises. But Nashton can’t let go, and follows the trail of the missing money until he comes across a gruesome display of violence that makes clear just how far his boss is willing to go. In other hands, this could have been a start of a heroic arc—but we know something far darker awaits Edward. It’s a compelling look at how someone can start out with a good motivation, but become so obsessed that it turns into something far worse.

Ray: This series has had one big problem since the start—Punchline is not a protagonist. She’s a one-note psycho who has the same challenge of a Joker led series, in that you need a compelling co-lead to drive the series. Last issue of Catwoman, also written by Howard, brought Punchline into Selina’s orbit and triggered a series of events that led to Catwoman being locked up and Punchline inheriting the now-poisoned Alleytown. Punchline, when she’s alone on screen, is a larger-than-life figure in a way that can feel oppressive, but it feels like Howard is trying to flesh out some of the supporting cast. In particular, Harper’s increasingly quixotic quest to track Alexis down is compelling, and the ongoing plot involving Cullen and his ex Bludd is strong. But Punchline spends too much of this issue talking to herself and dismantling a corpse, and that doesn’t always make for a compelling read.

Ray: This continues to be far more intriguing than I would expect any video game tie-in to be. With the FOMO mob in full swing in Gotham, the Bat-family battles to stop an amusement park riot from spiraling out of control and we get a better look at their complex dynamics with some good banter. Batgirl, meanwhile, finds roots in the conspiracy to a fairly obscure Bat-villain. But the most interesting segment continues to be the 1847 story, as our mysterious masked vigilante finds himself in the custody of the Court of Owls. This prototype for the terrifying group wants to experiment on him, but he’s more concerned with other prisoners—the group of slaves he’s trying to help get away from their twisted master. This story builds until a reveal that the Court of Owls aren’t the only major DC villains involved in this story. It’s a great look into an era of Gotham we’ve truly never seen before.

Ray: The penultimate issue of this long-running alternate universe delivers some of the best action of the entire series, with a chase segment that finds Nightwing on the brink of death and Terry betrayed by the man he’s been working for—his suit compromised and turned against his new allies. This creates an intense spectacle of an aged Bruce Wayne facing off against the Bat-suit he designed, unable to either beat it or willing to kill the boy inside to stop it. While much of this series has had some questionable elements, this issue does manage to very effectively capture the family vibe of the Bat-family—including the way it’s always open to new members. There are some genuinely emotional moments, but the entire subplot of the ghostly/holographic Joker who has been haunting Bruce continues to be a weird vestigial tail for the franchise that takes on another strange element this month.

Ray: I haven’t dug into the podcast yet, but I am very intrigued by this series’ vision of Gotham—taking the campy and colorful aesthetic of Batman ‘66 and fusing it with a darker theme and some surprising compassion for its villains. Batman and Robin are in different quarters this issue, with Robin being kidnapped by the Penguin. But Penguin doesn’t want to hold Robin hostage—he wants to work with him against the Scarecrow, surprisingly seeing him as a kindred spirit. Meanwhile, Batman is in the sewers, trying to round up Killer Croc before the tragic reptile-man gets involved in something far more dangerous than he’s ready for. Flashbacks to Croc’s origin reveal the involvement of two other major Gotham villains. The art style is great and the plot is fast-paced. I think this issue benefited from not having to split its focus nearly as much as the last two did, with two strong central plots.

Ray: Bruce Campbell has done a surprisingly good job of writing this supernatural WW2 thriller, to the point where I would assume he was an experienced comic book writer. The only problem is, the plot—Sgt. Rock and his squad go up against an army of resurrected German soldiers as part of a Nazi conspiracy—is exciting, but doesn’t really feel fleshed out enough to be a full six-issue miniseries. The story is deliberately paced, to the point where most issues seem to be a slow-burn military plot that just happens to have zombies in it. The main set piece this issue has the team taking over a Nazi checkpoint to get them a little closer to Hitler’s mad doctor, and that scene contains some great action and pyrotechnics. Then we have the ending, which just sort of ends as we wait for next issue rather than having a true cliffhanger. I have a feeling this might read a lot better as a completed 120-page graphic novel.