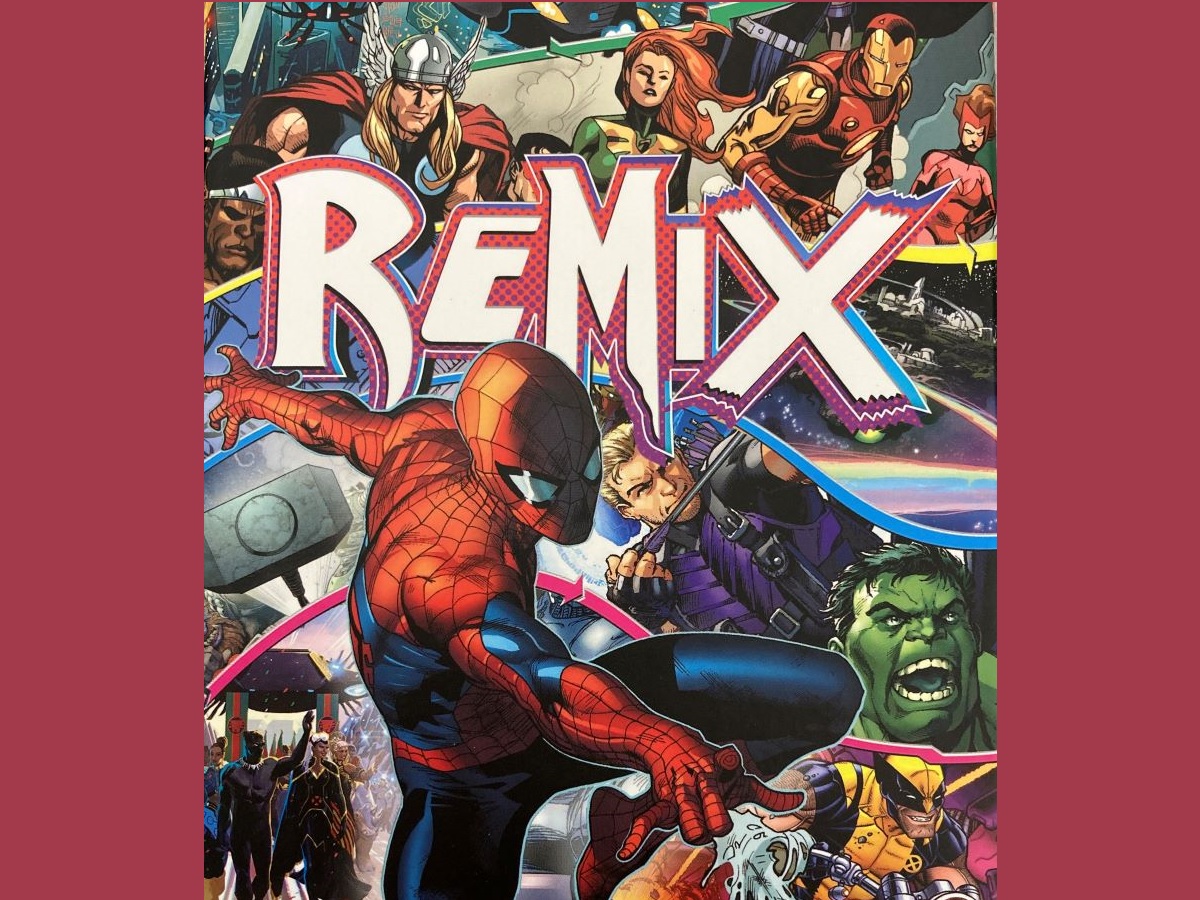 Thanks all of the movies and Disney+ series which together form the MCU (Marvel Cinematic Universe), Marvel is a very popular property right now. Therefore it is no surprise that the tabletop gaming industry is putting out lots of Marvel themed games. The latest, Marvel Remix, takes the Fantasy Realms card game system which was first released in 2017 and not only gives it a new theme, but also modifies the system to fit into a world of super heroes and super villains with super powers. Now you get to assemble your own collection of heroes allies. Can you make the best team to take on each villain?

What Is Marvel Remix?

Marvel Remix is a combo-building card game set in the Marvel universe for 2-6 players, ages 12 and up, and takes about 20 minutes to play. Players draw cards with characters, villians, equipment,  locations, artifacts, and more in order to create combos to score points at the end of the game.  Marvel Remix is based on the Fantasy Realms card game, which is not only GeekDad Approved but was also a finalist for the 2021 GeekDad Game of the Year. Star Trek: Missions, which was released earlier this year, also used the Fantasy Realms system with some modifications to make it fit a different theme and create a game that plays a bit differently. Marvel Remix is currently available from your FLGS as well as Amazon for a suggested retail price $24.95 for a copy of the game. Marvel Remix was designed by Bruce Glassco and published by WizKids, with graphic design by Daniel Solis, Renee Lasater, and Richard Dadisman.

Remix cards are the main cards in the game used to score points. There are six different types of Remix cards: hero, ally, condition, equipment, location, and maneuver. These cards have a base power in the upper, left corner which is the amount of points it is worth at the end of the game before any modifications are applied. Along the side are icons that represent tags. For example, Spiderman has strength and agility tags. These tags are used with the bonus text at the bottom of the cards to modify the base power of other cards in a player’s hand. At the end of the game, you must have at least one hero or ally card in your hand.

Villain cards are similar to Remix cards. They have a base power, tags, and bonus text. However, they have a detrimental effect on scoring your hand. The key is to decrease that negative influence on your score by  following the bonus text. For example, Kang’s base power will subtract 10 from your score. However, you get +5 for each different tag in your hand. If you have Magneto in your hand, then you want to get rid of equipment cards as well as those cards with the tech tag. You must have at least one Villain card in your hand at the end of the game in order to score your hand.

The score pad is used at the end of the game to calculate the score of each card in your hand based on the bonuses. Then you can add up the individual values of each card to determine your total score.

How to Play Marvel Remix

The goal of the game is to assemble the highest-scoring combos possible by drawing cards from the Remix deck, the Villain deck, or the discard area.

Start off by shuffling the Remix and Villain decks separately. Then deal six Remix cards and one Villain card to each player. Place the two decks face down in the middle of the play area and leave room for nearby for the discard area. Choose a player to start and  and then continue play clockwise.

During each player’s turn, they must choose one of three options:

All of the cards in the discard area should be faceup and spread out so they are visible to all players.

The game ends when there are ten cards in the discard area. Then players score their hands. The player with the highest hand is the winner. In case of a tie, the tied players share the victory.

When the game ends, each card in a player’ hand scores points based on the other cards in their hand. Most cards have a base power which may be modified by other cards in your hand. When scoring, place your hand faceup in front of you in a line and then score each card individually and write the score on the score pad. After each card has been scored, then add up the scores to calculate the total score.

Let’s take a look at an example of scoring using the cards in the above image.

The total for this hand is 81. It is important to note that even though Colossus, Valkyrie, and Vision only scored their base power, their tags helps score additional points and prevented Mystique’s negative bonus ability.

Why You Should Play Marvel Remix

Fantasy Realms is one of my favorite games and I also enjoy playing Star Trek: Missions. When I heard that WizKids was releasing a Marvel game using the same system, I was excited to try it. I found Marvel Remix to be easier for new players to learn than the other two games. Unlike Fantasy Realms, the cards in Marvel Remix have very straightforward bonus text that often has you counting tags on other cards. This makes scoring a bit easier since you only look at the bonus requirements to get the score for each card and players can easily keep track of how cards in their hands affect each other. As a result, Marvel Remix is more approachable for newer players that the other two previous games.

I have had a lot of fun playing Marvel Remix. It is very easy to teach to new players and the game play is simple: draw and then discard. The discard area acts as a timer. Drawing from the decks essentially advances the ‘timer’ while taking a card from the discard area keeps the the ‘timer’ from progressing. Players need to keep track of how many cards are in the discard area and adjust their strategy accordingly. Don’t forget that you need to have either a hero or ally card in your hand as well as a villain card. Otherwise, you hand scores a 0. Therefore If it looks like the game is about to end, you want to ensure you have met this requirement and may want to switch to other cards that do not score as much rather than trying to get the right combos for a higher score that might not happen in time. This mechanic keeps all players engaged as they watch what cards are discarded during each turn and adjust their strategies as new cards are revealed. Since a game usually only lasts about 20 minutes, you can play several games for an evening. Marvel Remix also works great as a starter for a game night while waiting for everyone to arrive or just to get everyone warmed up for a meatier game. Marvel Remix is a great game to take with you on the go. Due to its short playtime, it’s perfect to play during a break or lunch at work. All you need is space for the decks and the discards. Like the other games on which it is based, Marvel Remix has engaging gameplay, a great theme that fits the mechanics rather than just being an overlay, and provides for quick games in a variety of settings. For these reasons, I highly recommend Marvel Remix as a fun addition to your game collection whether or not you are into comic books and superheroes.