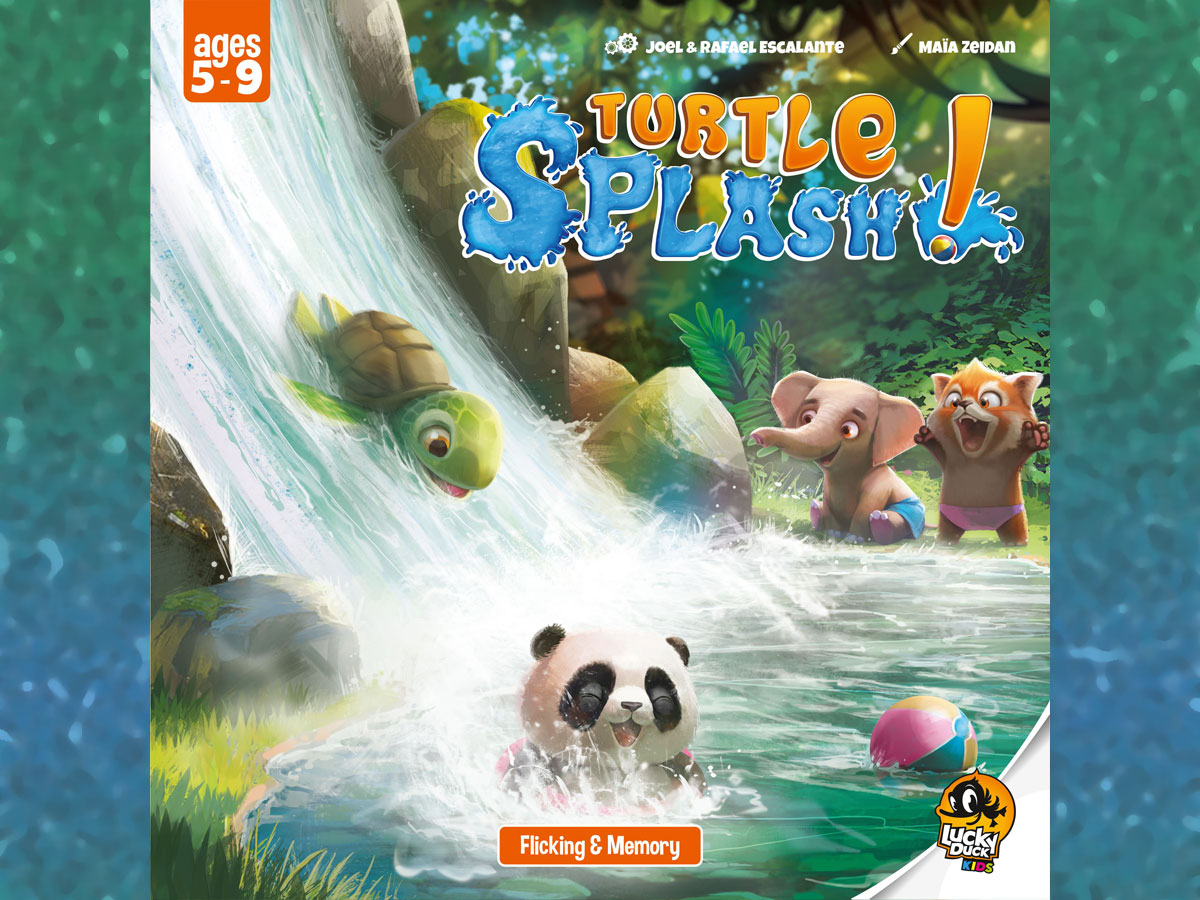 The animals are playing hide-and-seek at the lake. Turtle is late, so she decides to make a splashy entrance!

What Is Turtle Splash?

Turtle Splash is a dexterity and memory game for 2 to 4 players, recommended for ages 5 to 9, and takes about 15 minutes to play. You can pre-order it now for $24.99, and it is expected to ship in late September. Although it’s primarily designed to be a kids’ game, I’ve had fun with it with some teens and adult players as well; players who have better memories or better flicking skills will have an advantage.

Turtle Splash was designed by Joel and Rafael Escalante with illustrations by Maïa Zeidan. Turtle Splash is published by Lucky Duck Games in partnership with Gigamic.

The River track is a cardboard slide with two removable barriers; it comes pre-assembled and stores in the box that way, which is great. Cardboard constructions that you have to build and disassemble for storage don’t hold up as long. The bottom of the river track has a puzzle-piece connector that attaches it to the lake board. The lake board itself is dual-layered, with a raised lake and a recessed area in the middle.

The turtle token is a wooden disk, and the rest of the tokens (balls and swim rings) are cardboard punch-outs. The turtle has enough friction that it doesn’t slide down the ramp on its own, and in fact may not make it all the way down the ramp if you don’t flick it hard enough.

The player boards are made of cardstock, and each depicts the same 12 animals, though arranged differently on each sheet so none are identical. These animals are also individually represented on the tiles. The illustrations are very cute—they’re all baby versions of the animals, looking like they belong in a kids’ movie, wearing floaties or goggles or playing with pool toys. The back of the rulebook gives the names of all of them.

How to Play Turtle Splash

The goal of the game is to be the first to find all 12 animals in the correct order.

Place the lake and river track in the center of the play area, with the turtle token on the track. (You can optionally remove the rails on the track to make it more difficult.) Shuffle the 12 animal tiles and make a 3×4 grid of them. Put the swim rings nearby.

Give each player a player board and three beach balls, which are placed on the left side of each row.

The player who was most recently late to something goes first.

On your turn, you flick the turtle down the river into the lake, and then flip some animal tiles.

You are trying to find the animals on your board from left to right. After you’ve flipped over tiles, you compare the revealed animals to your board, and advance the beach ball across any matching animals. You can work on any of the three rows, but the ball must progress from left to right.

If you can’t advance the ball at all, then you get a swim ring token, which can be spent on a future turn to flip an additional tile.

At the end of your turn, flip all the animals face-down and it’s the next player’s turn.

If you get all three beach balls to the right by finding all the animals, you win!

Why You Should Play Turtle Splash

Turtle Splash is a fun little game that mixes dexterity and memory; it’s not deeply strategic (though there are some strategies) and is more skill-based. It can help kids develop and practice fine-motor skills and memory, and I think is much more entertaining for the adults and older kids than playing Memory one more time.

For one, in this game since everyone has a different order that they want to find the animals, you’re not all looking for the same thing. Sure, somebody found the panda right away, but if you don’t need the panda until the end of your row, that’s information you will need to hold onto for a longer time. In the traditional Memory matching game, every card you flip that doesn’t match could immediately help the next player. Here, everyone might need different animals to match.

The other tweak is the flicking portion. Now, your mileage may vary, but I’ve always loved flicking games. I recommend giving everyone a few practice flicks, and you can also decide whether players get a mulligan if they botch a flick. The turtle has a little more friction than you may expect, so it takes a push to get it sliding down the river—it frequently stalled out without reaching the lake. On the other hand, those who are accustomed to flicking games where you have to hit a target may find themselves overshooting. The recess at the center of the lake isn’t very deep, so it’ll stop you if you’re going at the right speed, but it’s still possible to glide right over it.

The thing about Turtle Splash is that, to an extent, you can compensate for having a bad memory by flicking well, or vice versa. If I can flip 3 tiles each turn, I can just dig for the animals I need even if I don’t remember exactly where everything is. But if I have a good memory, I can make sure that every time I flip 1 tile I get what I need. (To be fair, it does help to flip at least 2 tiles a turn just to advance your beach ball a little more quickly.) The swim rings serve as a slight catch-up in case you just can’t find anything at all.

If you’re playing with a mix of skill levels (particularly if you’ve got younger kids mixed with older players), it’s easy to give some players a head start with a swim ring, or give the more experienced players an extra challenge by popping the rails off for them. I do think the game will be best for players who don’t have a perfect memory and professional Crokinole skills, because if every player sinks the turtle every turn, then it’s just a matter of luck the first couple flips and then the outcome is almost inevitable. In my plays, though, we’ve had plenty of bad flicks or mistaken flips, which makes the outcome a bit more dramatic.

In terms of strategy, one of the things you can do is look at other players to see what’s going to help them. If you have a choice of moving a beach ball with the red panda that has already been revealed previously, or looking for the orangutan that hasn’t been found yet, you may want to check who else is looking for the orangutan. Maybe they’ll find it for you?

We also ran into a situation once where I needed 4 animals to complete my board, but another player only needed 3. I knew where most of mine were, but they were still looking for theirs—and there was some overlap. I figured out that if I flipped the first 3 of mine, it would show the other player where their needed animals were and might let them win on the next turn. But if I didn’t flip any correct animals on a turn, I’d get a swim ring. Then, if I managed to get a perfect flick on the next turn, I could flip 4 tiles and win the game, assuming the other player didn’t find all 3 of theirs. It was a risky move, but I tried it … and then got stuck on the ramp on my next turn. Ah, well!

All in all, Turtle Splash is a cute little game, targeted at younger players but can still be a fun casual game for older folks as well (as long as you have at least some fondness for flicking games—otherwise I’d steer you away from it). For more information, visit the Turtle Splash page at Lucky Duck Games! 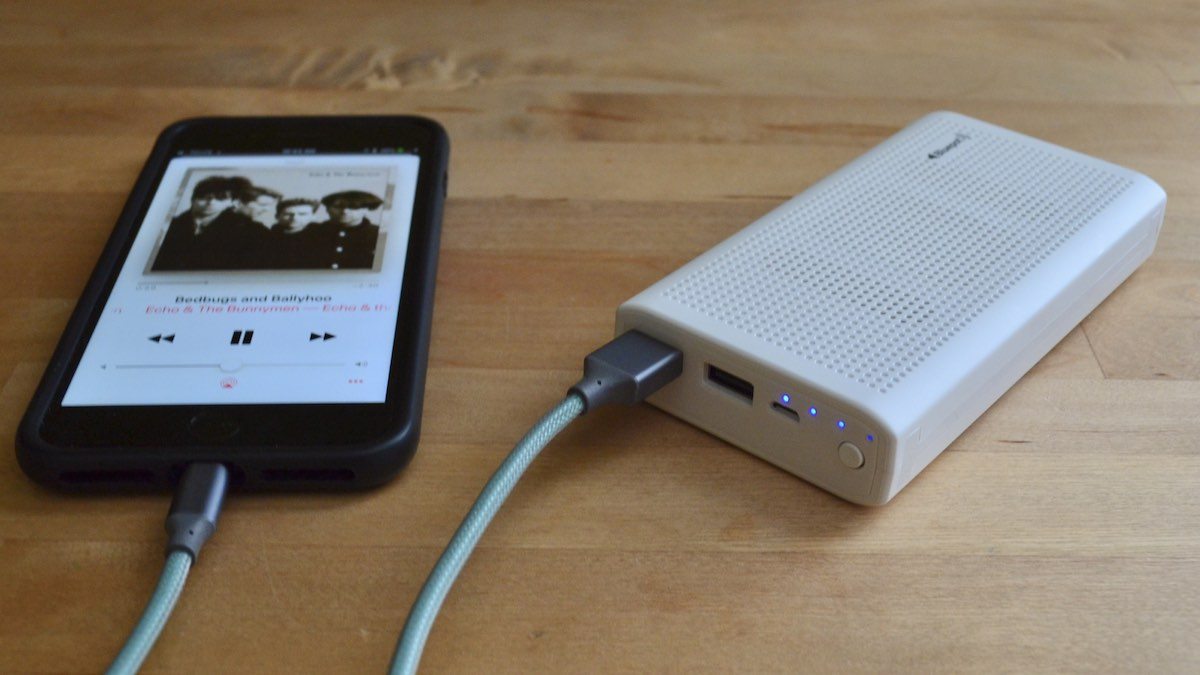 HMLink Bluepot: A Unique Approach Flips the Speaker With a Battery Charger Model 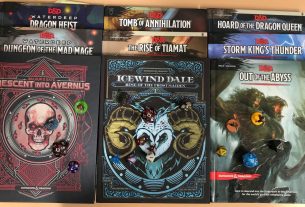