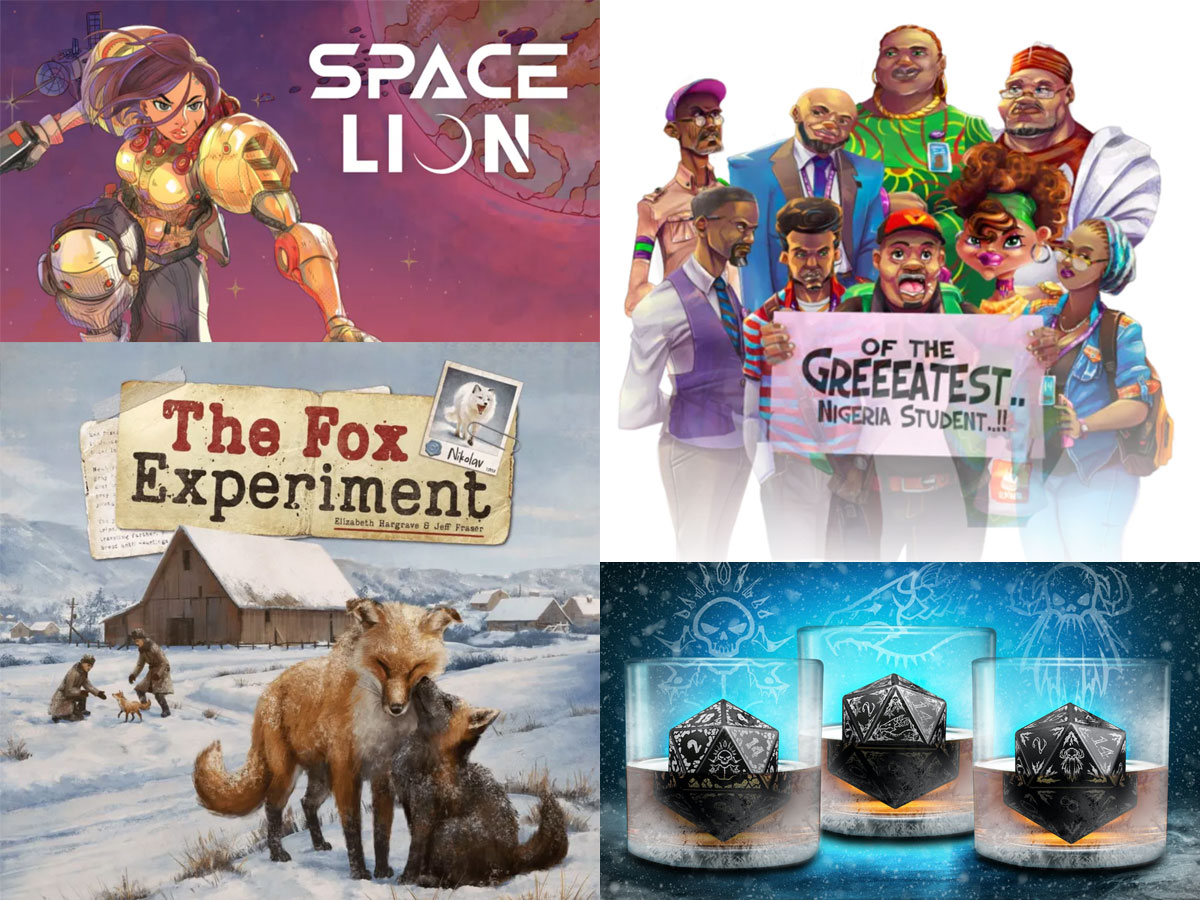 I fired up WordPress to start this roundup post and checked my list of projects I wanted to share, only to discover that about half of them ended in August! My family finally got hit by COVID, recovered in time to take my eldest kid to her first year of college, and then got my other kids started with their school year… and more time passed than I realized. Well, not to worry—the one thing you can count on is that no matter when you look, there are still plenty of tabletop projects seeking funding.

Here are several projects that I’ve been alerted to lately—in some cases, a publisher contacted me but I didn’t have time to do a review. In other cases, I’d been hoping to review a game but wasn’t able to get my hands on a prototype. And some, well, I just came across and thought they looked neat. (My disclaimer is that I haven’t played most of these games myself, so caveat emptor.)

These are in order of closing dates, so at the top of the list are projects that are wrapping up first.

From the designer and publisher of Pocket Paragons comes this multiplayer duel. Every round, you’ll play cards to battle against the two players to your left and right, plus a free-for-all in the center. Each player has a unique army consisting of only 7 units, so you have to make the most of a limited arsenal, while keeping in mind which units your rivals have just played and don’t have access to.

KC Ogbuagu is a Nigerian game designer who founded NIBCARD Games as well as the African Boardgames Convention, helping to spread the joy of board games in Nigeria and across other parts of Africa, as well as sharing African-designed, African-themed games to the rest of the world. Campus Wahala is his latest design, based on the end of a strike by Nigerian university staff in 2013. Draw cards and distribute them, mancala-style, to yourself and other players, trying to collect books for yourself and sabotage everyone else’s lockers.

I’ll admit: I probably already own more narrative-based adventure games than I will actually get to play through, given the number of games I’m trying to get to the table every week, but that doesn’t stop me from ooh-ing and ahh-ing at this one. This is the first project from Incredible Dream Studios, but it has some experienced names behind the wheel, so I’m keeping my eye on it.

Looking for a calendar for 2023? Scott King has you covered! He’s been publishing calendars featuring his stunning tabletop photography since 2014. You can get the base calendar with 12 pre-selected photos, or get a custom calendar where you get to choose from a whopping 504 options. If you love your dice and meeples and cards and miniatures, here’s a fun way to put those on display while keeping track of game nights and convention dates. (Oh, and meetings and dentist appointments too, I suppose.)

Dawn of Ulos by Thunderworks Games

Dawn of Ulos is the latest game set in the Roll Player universe from Thunderworks Games. This time, you’re playing as competing gods shaping the land of Ulos, pitting the various factions against each other and betting on the outcomes. It’s a tile-laying game and you collect cards as you expand a faction’s territory; the bigger a faction’s territory, the more their cards will be worth. But the twist is that you may need to spend cards to help a faction win conflicts—deciding which cards to spend and which to keep is a tricky balance.

I’ve been a big cheerleader for GameTrayz ever since I first encountered them at Gen Con several years ago, and chances are if you own any big box games published recently, you have some GameTrayz in them keeping all the bits sorted and speeding up setup. Well, GameTrayz is now publishing a game themselves, and you can expect that they’ve come up with some fancy trays for themselves. Forsaken is a big sandbox story game about trying to become a legend, and I’m only a tiny bit envious of the folks who got to try out a prototype before launch. (Okay, a lot.) I’m definitely curious to see what this game is like!

The Fox Experiment by Pandasaurus Games

Elizabeth Hargrave, designer of Wingspan, has a new game about domesticating foxes, based on the Russian experiments from the 1950s. You’ll choose parent foxes to breed for their friendly traits, and the pups that are born will become the parents for the next generation. Hargrave’s blend of science and games has been a worldwide hit, so I’m pretty confident this experiment will prove successful as well.

Quodd Heroes originally appeared on Kickstarter back in 2017, and I talked to designer Ryan Iler about it at Gen Con 2018, when it was wrapping up production. It’s a sort of sandbox game with lots of different scenarios available, and the heart of it is the cube-shaped characters who move by tumbling and using spring-pads to get around the board. This new edition uses a spiral-bound scenario book instead of the modular boards from the first edition, and also includes more scenarios and other goodies.

I wasn’t familiar with Arvis Games, but I love deck-building games and I was curious what “secret deck-building” meant. You choose actions simultaneously along with the other players, and then resolve them, so the game is as much about predicting your opponents’ actions as it is about putting together the best crew for your ship.

Atlas Lost: Rise of the New Sovereigns by Tactical Games

This civ-rebuilding game features artwork by Kazuma Koda, the concept artist of the NieR:Automata series. It’s a tech-tree game with variable amounts of player interaction depending on which mechanics you choose during setup. I enjoy playing with tech trees (even though I’m not always great at it), so this looks really fascinating to me.

D’icy Monsters by The Boardgame Zone

I’ll wrap up with this project: obsidian whisky stones shaped like polyhedral dice! I don’t actually drink whisky myself so these aren’t for me, but they’re definitely fun—they come in three different designs (Frost Giant, Lich King, and Ice Dragon) and you can get anything from a d4 to a d20. Cool your drinks without watering them down, or just have a really fancy set of enormous dice! 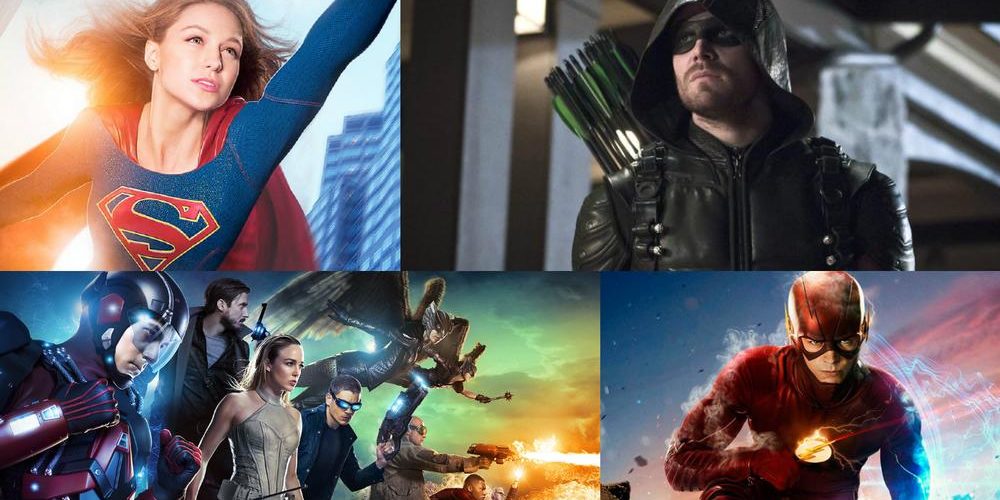 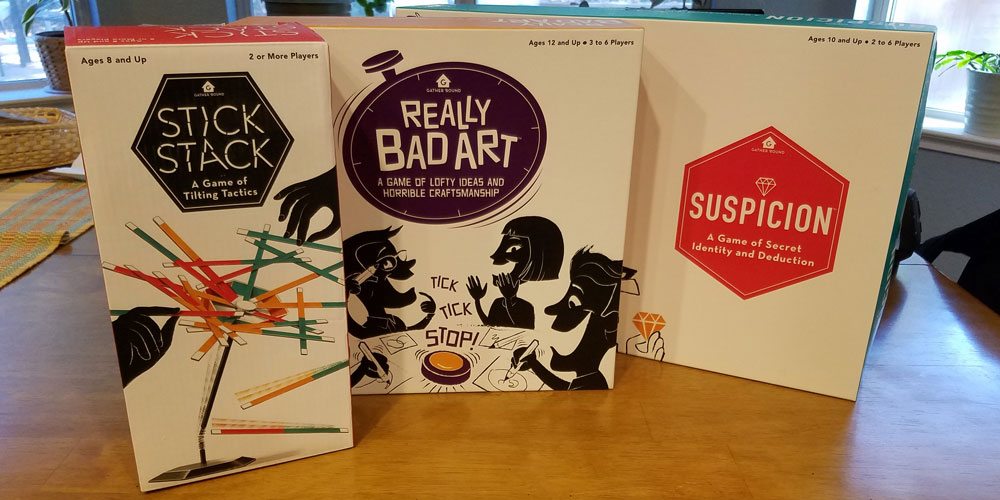