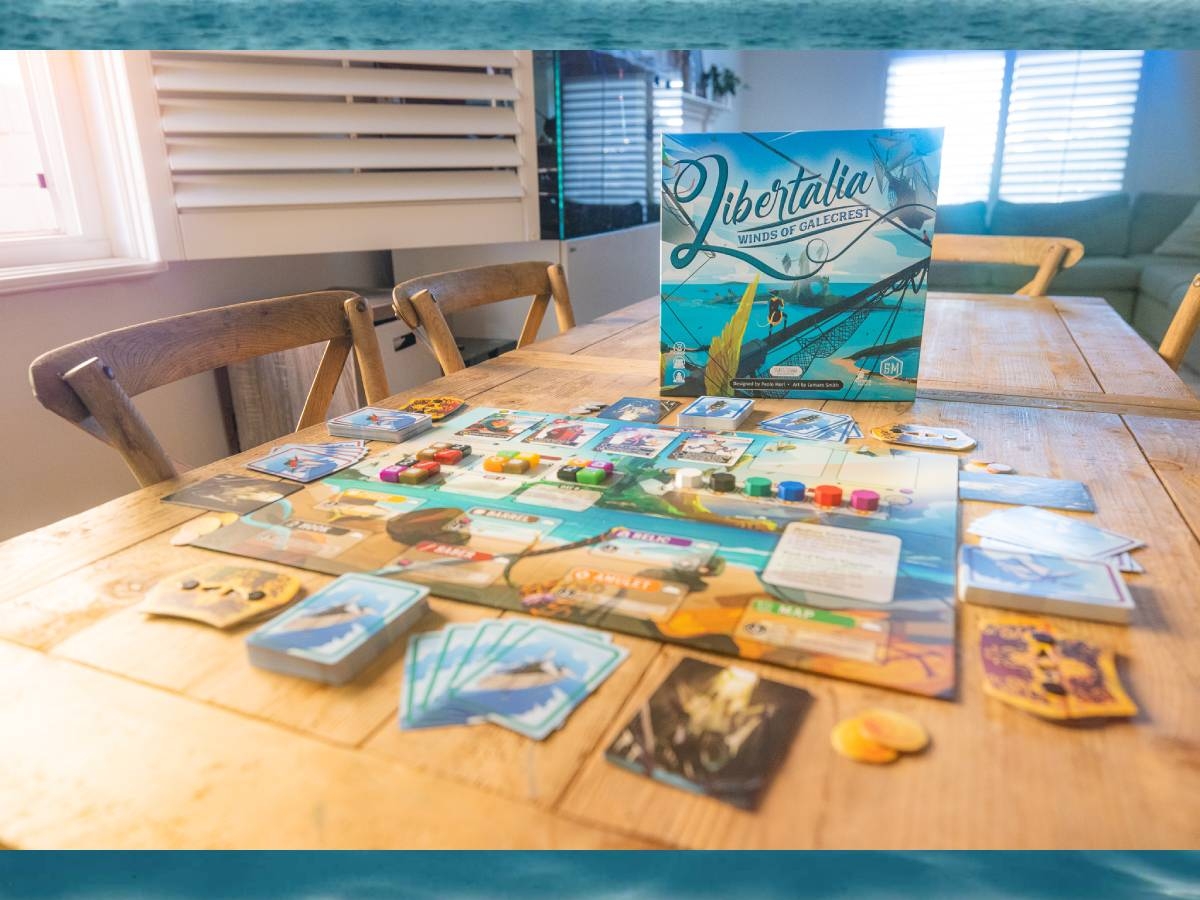 Ten years ago, the now-defunct Marabunta, a publishing arm of Asmodee, released Libertalia, a card game about pirates competing for treasure. The popular game has been out of print for a few years, but recently, Stonemaier Games announced they were publishing a new version, now known as Libertalia: Winds of Galecrest.

What Is Libertalia: Winds of Galecrest?

Libertalia: Winds of Galecrest is a game of hand management and simultaneous action selection for 1-6 players, ages 14 and up, and takes about 45-60 minutes to play. I believe that you could probably run a bit younger with the age range as the game is pretty easy to learn and understand. With an MSRP of $55, it’s currently available to preorder on both Stonemaier Games’ website and Amazon, with a targeted retail release date of April 29th.

Libertalia: Winds of Galecrest was designed by Paolo Mori and published by Stonemaier Games, with illustrations by Lamaro Smith.

Here’s everything that comes in the box:

Overall, the quality of the components is very nice, and definitely in keeping with other releases from Stonemaier Games.

The game board is very useful, and a marked change from the board in the 2012 version. In the original Libertalia, the game board was smaller, and only had spaces to play cards and to place the loot for each voyage. This board has those, as well as tile spaces explaining each loot type’s abilities, steps to follow during gameplay, and the new reputation track. Additionally, there are visual reminders for how to proceed with the 3 different phases of a day.

Additionally, the board is double-sided. There is a “stormy” side, where the loot tiles have different, and somewhat harsher, abilities than the ones on the “calm” side.

There are also double-sided cardboard loot tiles, so that you can choose to mix and match with abilities on either board side.

Speaking of loot, there are very nice plastic loot tokens, which you’ll randomly draw from a cloth bag and place on each day space at the start of each voyage. There are also reminders on the game board of how many days are in each voyage.

The cardboard doubloons come in three different denominations. Conveniently, there is a plastic tray with lid that comes with the game. You can just take the tray out and place it next to the game board for the bank when setting up the game.

The original version of Libertalia had a separate board with a score track to keep track of money. In Libertalia: Winds of Galecrest, each player has their own pirate chest, with score dials to mark their treasure. While this is more thematic, it also makes it a bit harder to keep track of who’s winning the game.

Each of the treasure chests has a different color of gem to match with the deck colors. Each player has an identical deck of 40 cards, and they come with a linen finish. As a matter of fact, the two included rulebooks also have a linen finish, and feel very nice to hold.

How to Play Libertalia: Winds of Galecrest

The goal of the game is to collect the most treasure over the course of 3 voyages.

Place the board on the table, choosing one of these three configurations:

All players receive a deck of 40 cards, a score dial, and a graveyard tile.

Additionally, for a 2-player game, the second and third spaces of the island are covered with the Midshipman tile.

Randomly draw and place a number of loot tokens on each day space for the first voyage equal to the number of players in the game. 2-player games will have 3 loot tokens per day.

A selected player will shuffle their deck of cards and draw 6 cards, revealing them. Every other player will then pull those same 6 cards from their deck, forming their starting hand.

Everyone receives the number of doubloons indicated by where their token sits on the reputation track.

Libertalia is played over 3 Voyages. The first Voyage is 4 days, the second is 5 days, and the third is 6 days.

Each day begins with all players selecting a character card from their hand and revealing it simultaneously. The cards are then placed on the Island at the top of the game board in increasing rank. Should one or more players choose an identical card, then the player with the higher reputation places their card farther right on the track.

Once all the cards are placed, play then proceeds with these 3 phases:

Starting with the leftmost character and proceeding right, each player with a character on the island activates their character’s daytime ability, if any.

Now starting with the rightmost character and going left, each player with a character on the island:

At the end of the Dusk phase, any remaining loot tokens for the day are returned to the bag.

Simultaneously, each player activates any night abilities on characters in their Ship.

At the end of the Night phase, players move to the next day, repeating all of the above steps. If that was the Night phase for the final day of the current voyage, then the following steps occur:

The game ends when the third Voyage ends. The player with the most doubloons wins.

Automa is the dedicated solitaire mode for Libertalia: Winds of Galecrest. In this mode, you will use the Midshipman tile, as well as special Automa loot tiles and solo card deck.

In the Automa game, you are actually playing against two opponents, the Automa and the Pilferer. The Automa plays similarly to a regular player, whereas the Pilferer will only get placed on the Island by rank, and gains a loot token in the Dusk phase. The cards in the Automa deck can each be played as either the Automa or the Pilferer depending on orientation:

During setup for each voyage, it is the Automa’s deck that will determine which 6 cards you will draw for your starting hand. Play also proceeds in a slightly different order:

Without getting into a detailed explanation, the number and types of loot tokens that are available on the particular day of a voyage will determine which card gets played by the Automa.

Both the Automa and the Pilferer draw loot in the Dusk phase based on a priority list.

Other than those changes, play generally proceeds as normal through the phases of a day. The Pilferer doesn’t use card abilities or participate in scoring, only gaining loot tokens and then getting discarded at the end of the Dusk phase.

Why You Should Play Libertalia: Winds of Galecrest

Not long before the pandemic started, I played the original Libertalia at a local board game meetup, and fell in love with the gameplay. It’s got some “take that”-style gameplay, but not in a mean spirited way. You really felt like pirate captains competing with each other over plundered booty.

The day after the meetup, I hopped online to get my own copy, and was distraught to see that the game was now out of print. Yes, I could still find Libertalia, but I didn’t want to spend double the retail cost or more on a used copy of the game.

So I was understandably excited when Stonemaier Games announced they were publishing a new version of Libertalia. But this was a “completely revised, expanded, and refreshed edition.” Was the gameplay still going to be the same as the original?

The good news is that game designer Paolo Mori stayed onboard for Libertalia: Winds of Galecrest. The same easy to learn gameplay is there, where you’re trying to guess what cards your opponents might play, as that may affect what card you want to play. Do you play that low-ranking card for its day ability, knowing that you may not end up with any loot for that day? Maybe you decide to play that card with the great anchor ability…but you know that at least one person at the table is holding a card which could force you to discard that card from a ship before you even get a chance to use it.

Everyone starts the game with the exact same hand of cards, which has everyone trying to outfox each other. At the end of the first Voyage, everyone will have two of their original six cards carry over into the next voyage. But each player may have a different pair of cards, depending on what they played.  Which makes the game even better in the second and third Voyages.

Libertalia: Winds of Galecrest introduces some new features not found in the original game. In my opinion, one of the best of these is the Reputation track. Originally, resolving ties was based on a static system of small numbers printed on the cards of a player’s deck. The Reputation track is much more dynamic, adding another strategic layer to the game. Not only does your position on the track determine tie breakers, but there are character cards that allow you to manipulate your position on the track, gaining or losing doubloons in the process. Additionally, the lower you are on the Reputation track, the more doubloons you earn at the start of a voyage.

Many of the changes increase the replayability of the game from the original. With Libertalia: Winds of Galecrest, you get more character cards, more loot abilities to choose from, and both 2-player and solo modes.

While I generally love the new enhanced gameplay, I was a bit disappointed with the art and graphic design choices. In the original Libertalia, you really felt like competing pirate crews. This was in no small part to the individual player boards from the original, which gave each player their own named pirate captain and ship. Libertalia: Winds of Galecrest does away with those boards, opting to instead place the information from those boards onto the larger main game board. While this makes gameplay cleaner, it’s at the cost of some of the thematic flavor. Now the only differentiation between players is the player color.

These brighter, anthropomorphic sky pirates on the character cards never really felt, well, “pirate-y” to me. They have a cartoon-like quality which will definitely appeal to some, but not those who want to play out their Pirates of the Caribbean or Our Flag Means Death fantasies on the table. And one last gripe: in the original, everyone played their character cards onto a game board that looked like the deck of a pirate ship. It does make thematic sense to play the characters onto an island in Libertalia: Winds of Galecrest, as that’s where pirates would be digging for treasure. However, the physical location on the game board where you play your character cards is in the air, well above the island itself. You could justify this decision by saying that the characters are rappelling down from their airships, but if that was the case, why not show the ropes the characters are descending on?

While I do miss the old school pirate theming, Libertalia: Winds of Galecrest has the same great gameplay of the original, as well as several additions that will keep you bringing the game back to the table. If you’re looking for a fun competitive game for both friends and family, then Libertalia: Winds of Galecrest might just be the game for you.

For more information on the game, head over to Stonemaier Games’ website. 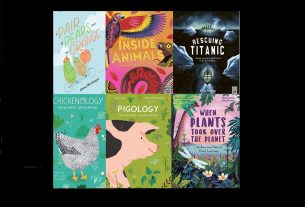 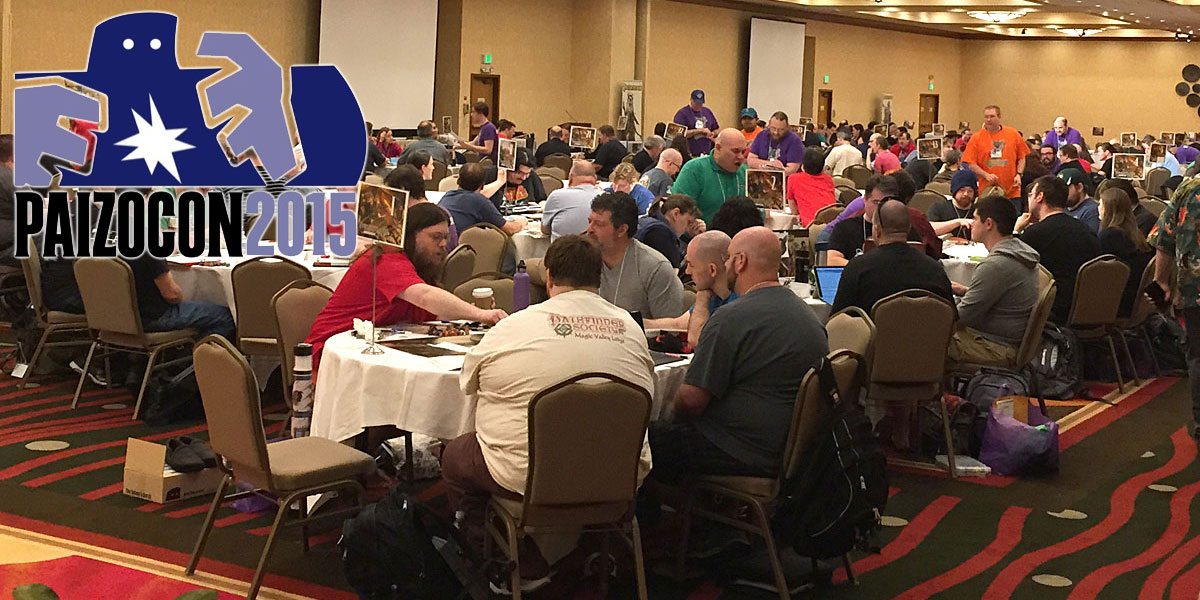