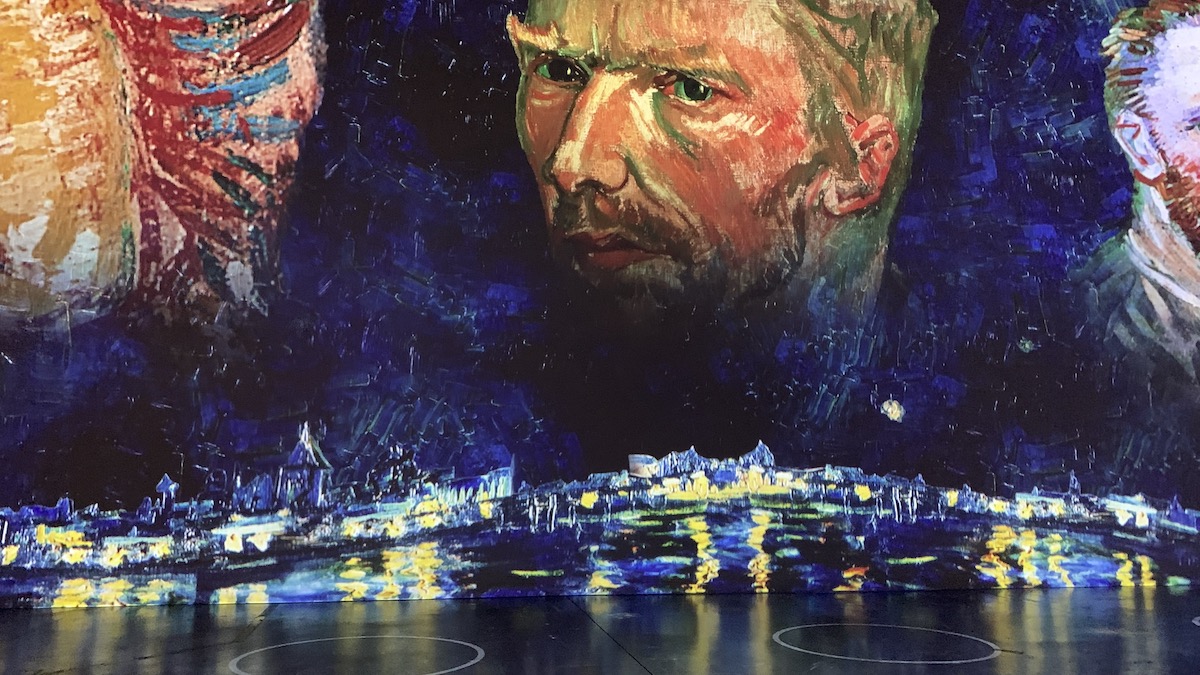 As part of a recent trip into Toronto, I stepped out for several public outings—the first crowds I’ve been in for a year and a half. If you don’t count grocery stores… The first was to the ROM’s Great Whales: Up Close and Personal exhibit. If you’re interested, you can read about that one here. The second was to Toronto’s Immersive Van Gogh exhibit.

What Is Immersive Van Gogh?

The company running this show describes it as “art that moves.” Basically, it’s a huge exhibition hall (large enough that at one point they were doing it as a drive-in show with cars) where the paintings of Vincent Van Gogh are projected on the walls, floors, and ceiling. It literally surrounds you. The paintings aren’t static. Instead, elements have been animated and set to a soundtrack.

In short, the show was pretty trippy. To me, the experience felt a bit like “laser Floyd” at a planetarium, but with art.

There are chairs available at the entrance that you can bring in to be seated through the show. Some people chose to sit on the floor and a few were lying down. I believe it ran around 40 minutes, so I was happy to have the chair. The big show is taking place on the walls in 360-degrees, but there are also complimentary projections on the floors. At one point we were maybe 20 feet from a wall, and I couldn’t see any sign of pixelation. The colors were bright, the details sharp, the animations suited the paintings, the music complemented the action, and it completely lived up to the “immersive” billing.

When the show is over, you walk out and through a gift gallery. A very extensively stocked gift gallery… If you ever wished you had any of Van Gogh’s better-known paintings in tee-shirt, poster, keychain, phone case, or teacup form factor, you’ll be pretty happy with it. There is also a cafe set up outside the gift shop, with coffee and pastries.

Do You Need to Be a Van Gogh Fan to Enjoy the Exhibit?

No. I’m more a music guy than an art guy. I’m aware of Van Gogh. I remember something about him cutting off an ear. I recognized The Starry Night and Sunflowers. However, despite my limited exposure, I thoroughly enjoyed the show as entertainment, while also gaining a deeper appreciation for the painter’s work. On the other hand, my wife is a big Van Gogh fan—she’s the one who insisted on going to the exhibit. She absolutely loved it.

My kids weren’t with us on this trip. There were a number of young families there and there seemed to be enough going on to keep the kids entertained. It can get a little dark/intense and loud for short durations, but I didn’t see or hear any young kids who were upset. My daughter would have enjoyed it, but I suspect our teenage gamer boys would have lost interest—there were zero explosions…

Is It Safe (With the Covid-19 Situation)?

The Toronto setup seems very safe. You have to go through the usual screening and masking up before entry. The space itself is huge and tickets are timed to prevent crowding. In addition, the floor is painted with well-spaced circles to make it easy for people to stay safely socially distanced.

Would I See It Again?

I’m not sure I would pay to see this specific exhibit a second time, but the experience was solid. I’d do it again with a different artist featured.

Where and How Much?

Is It Showing Anywhere Else, Including U.S. Cities?

Obviously, not everyone who might be interested in the exhibit happens to live in Toronto. However, Immersive Van Gogh is currently running in a number of U.S. cities, including New York, San Francisco, and Los Angeles. Check the website for locations, exhibit times, and ticket prices.