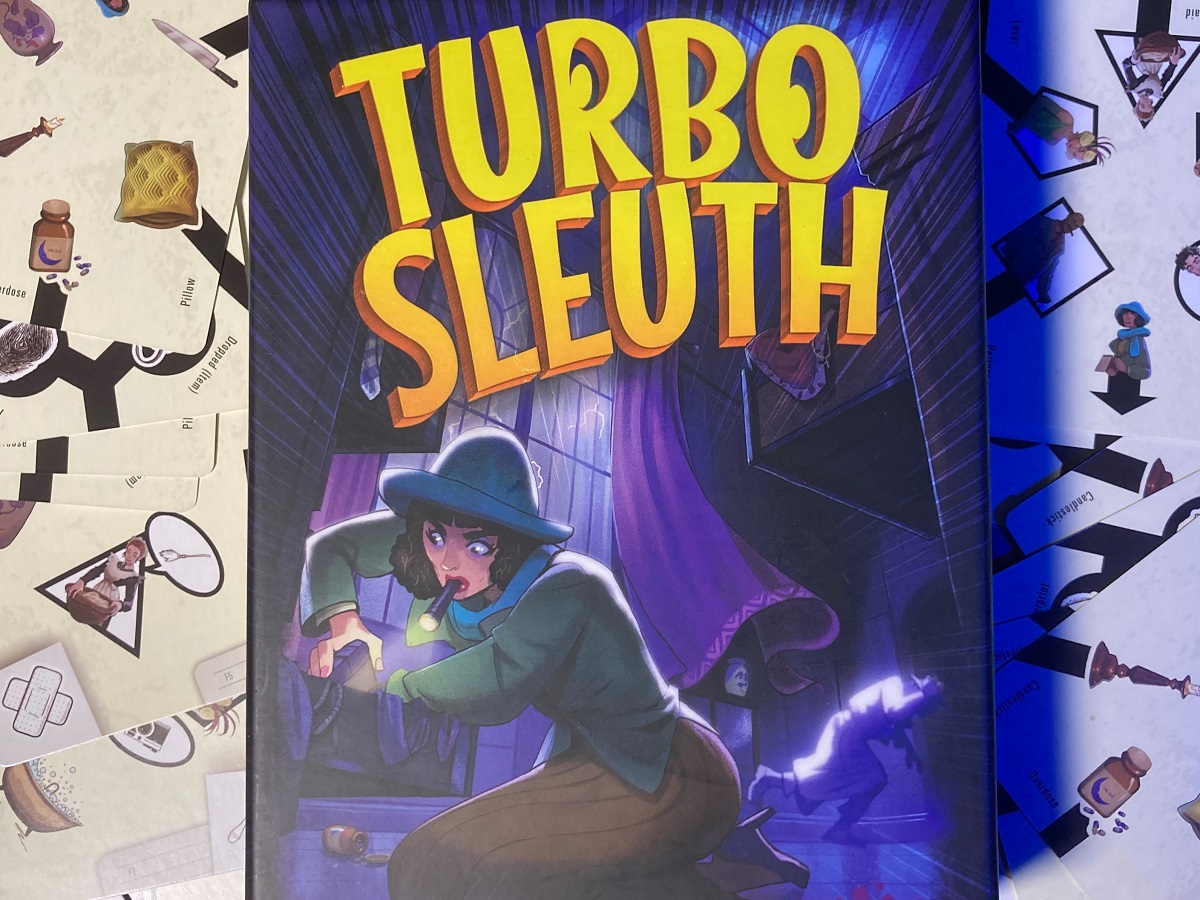 Old Miser McGreedy has been murdered. His body has not even been laid to rest and the murder suspects are already trying to divide up his fortune. Was it his business partner? His lazy son? Or did the butler do it? As the detective, you must solve the case before time runs out. Can you be a Turbo Sleuth?

What Is Turbo Sleuth?

Turbo Sleuth is a puzzle speed solving game for 2–8 players, ages 10 and up, and takes about 20 minutes to play. It’s currently available from your local game store as well as online retailers such as Amazon. The suggested retail price is $19.99 for a copy of the game. Turbo Sleuth was designed by Daniel Lee Yingjie and published by WizKids, with illustrations by Anthony Cournoyer.

Each round of the game uses either two or three clue cards which contain the information to solve the case. Directions for the various game modes are printed on the back of the cards as are the solutions.

Players each receive two answer cards to use for the game. By rotating and connecting the cards together, players can show their solution to the case.

These tokens have both a light and a dark side. They are collected as players lock in their solutions to the case and are used to determine the winner at the end of the game.

How to Play Turbo Sleuth

The goal of the game is to score the most points at the end of the game.

Give each player two answer cards. One has suspects and evidence while the other has weapons. Gather a number of score tokens based on the number of players. For 2 player games, use 4 tokens, for 3 players, use 8 tokens, for 4 players use 12 tokens and for 5 or more players use all 16 tokens. Turn the tokens to their light side. Return any extra tokens to the box. For each round, place tokens in the center of the play area equal to the number of players minus one. So for 4 players, 3 tokens would be placed in the center.

For the basic game mode where players must determine the suspect and murder weapon, shuffle the 8 clue cards and then place the top three cards on the table surrounding the score tokens. As soon as the last clue card is placed, the game begins.

In Turbo Sleuth, gameplay is divided into two phases: Analysis and Solution.

As soon as the last clue card is placed down, the round begins. Players must look at the three cards and determine the murderer and the weapon. The murderer is the suspect that shows up the most in the three cards. If there is a tie, it is the suspect with a magnifying glass next to them. The murder weapon is the one that appears on all three cards. If there is not one that appears on all three, then it is the one that is linked with the dotted line to the murderer.

After a player has determined the murderer and weapon, they use their two answer cards to show their solution by connecting the dark black line from the person to the weapon. They then take one of the tokens in the center and place it in front of them without turning it over. Once all score tokens have been taken, the round ends.

In order to find the solution, look at the letter in the corner of each clue card and arrange then in alphabetical order. Then look on the back of cards A, C, or E for the solution. If a player with a score token had the correct solution, they keep the score token and add it to their pool without flipping it over. If their answer was incorrect, look at the token. If it is on the light side, flip it over to the dark side and return it to the token pool for the next round. However, if the token was already on the dark side, it is discarded from the game and the player must also discard one additional token from their score pool.

If there are still score tokens remaining in the token pool, start another round by shuffling the clue cards and drawing three more and then playing the round.

The game ends when at the end of the round, there are no more score tokens in the token pool. Players then add up their score tokens. Light score tokens are worth 1 point while dark score tokens are worth 2 points. The player with the most points is the winner. In case of a tie, a tie-breaking round is played between the tied players with only one token in the center. Whoever wins this match wins the game.

In addition to the basic mode which I just described, there are also some advanced modes which provide even more replayability to the game. When playing an advanced game, shuffle the clue cards and then look at the top of the back side where it will have a title such as “Case A: Solve the Case” or “Case B: The Witness.” The cases with the title “Solve the Case” use the same rules as described where you find the murder and the weapon.

For “The Witness” cases, you need to find the suspect that appears the least on all three cards. If there is a tie, then it is the suspect with the keyhole icon next to them. To answer this, connect the detective to the witness.

In the “Missing Evidence” cases, you are looking for the weapon that is missing from all three cards. If all 9 weapons are present, then the victim was pushed. Connect the detective on one answer card to the weapon or the pushing hand on the other for the solution.

For the “Alibi” cases, you use only two clue cards. You need to find the suspect with the contradicting or missing alibi. Some suspects will have speech bubbles showing what they were doing at the time of the murder. Suspects with a single alibi are innocent. If a suspect has contradicting alibis, they become the lead suspect. Suspects with no alibi are suspicious and only become the lead suspect if no one else has contradicting alibis. Point the detective to the suspect for your answer.

Finally, for the “Evidence” cases, you once again only use two clue cards. Turn over your suspect answer card to reveal the evidence. You will use that and the other card to show your answer. The corners of the clue cards show evidence found at the scene of the crime. Your answer card shows which evidence is linked together. If there are multiple pairs of linked evidence, those with a magnifying glass next to them are more suspicious and take priority. Connect the detective to the two pieces of evidence for your solution.

Why You Should Play Turbo Sleuth

Turbo Sleuth is a quick and fun game with an element of push your luck. While you don’t have to be the quickest to solve the case, you just don’t want to be last since you won’t get a token. As players make mistakes, the pool starts getting some dark tokens which are worth double. However, if you grab a dark token and are wrong, you not only lose that token but one you had won previously. Therefore you have to be quick and accurate. The more people that are playing, the crazier it can get, especially as people players start grabbing tokens and others don’t want to be left without a token.

I had a fun time playing Turbo Sleuth with my family. We liked the fact that it can be brought to the table and ready to play in a minute or two. The rules are fairly simple, especially for the basic mode, and can be quickly taught to those who have not played it before. The advanced mode, with different types of objectives, really adds to the game and keeps players on their toes. Since everyone is playing at the same time, there is a high amount of player engagement. Turbo Sleuth is a great game to pull out after dinner or for family gatherings since you can play with up to 8 players. It is also great as an appetizer for a game night to get players warmed up or to play while waiting for everyone to arrive. If you have an itch to solve a murder, but don’t have a lot of time, I recommend Turbo Sleuth as great addition to any game collection. 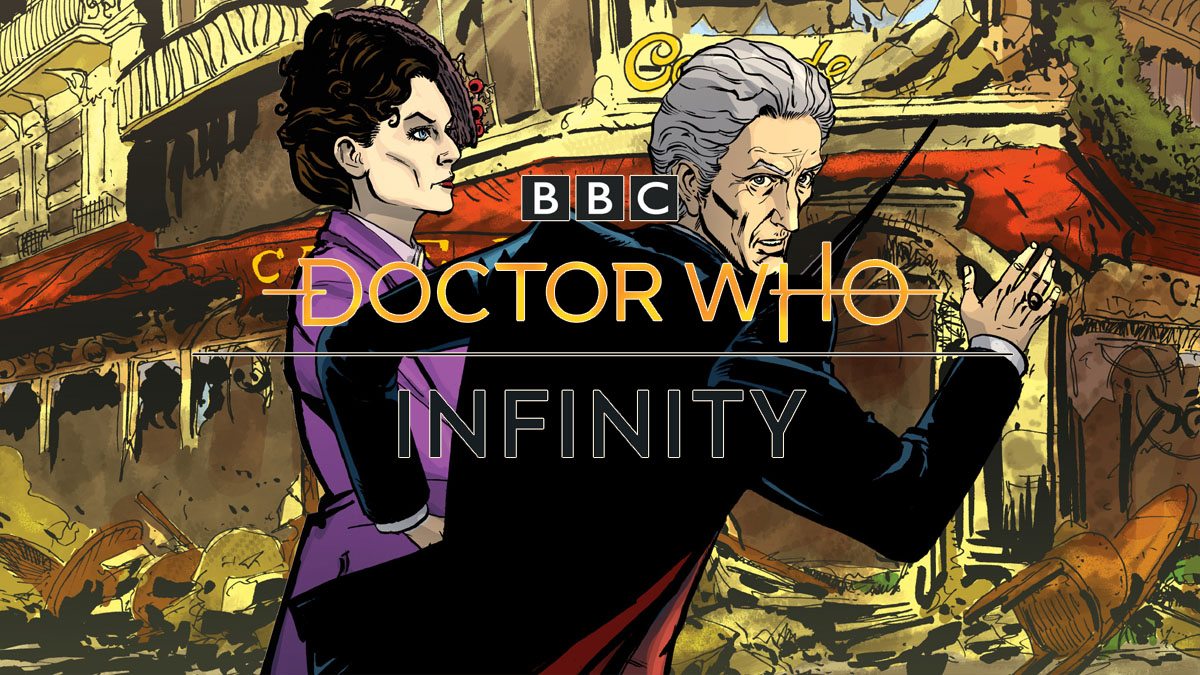 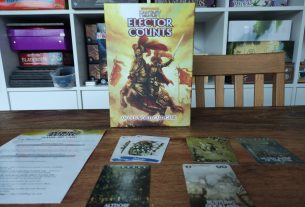 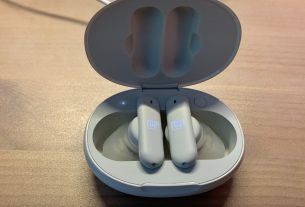