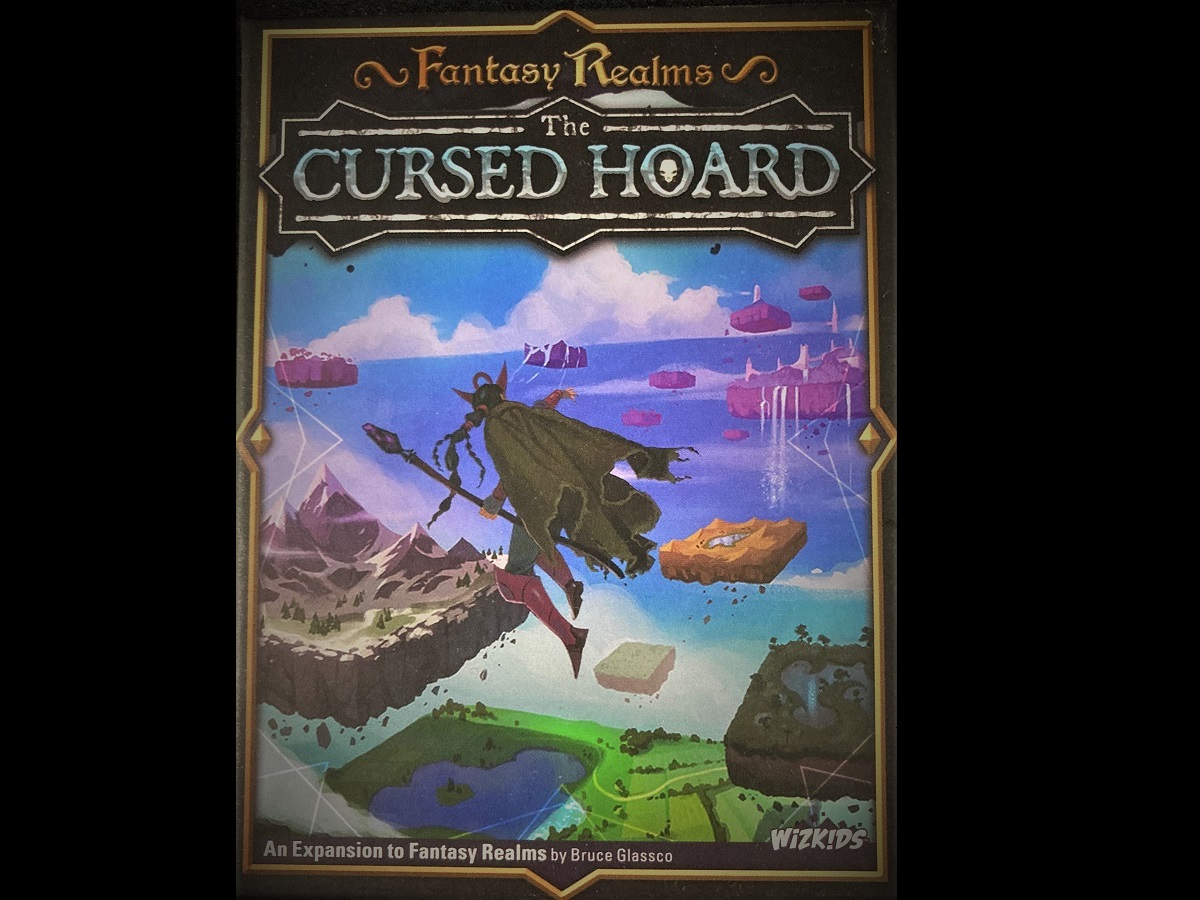 The Realms have gathered to continue their conflict. However, something new has been uncovered that can change the balance of power. These artifacts provide powerful abilities that can turn the tide of the conflict. However, the curses placed upon them shadow anyone who is brave (or foolish) enough to use them. Will you use the Cursed Hoard to help you emerge victorious?

What Is Fantasy Realms: The Cursed Hoard?

Fantasy Realms: The Cursed Hoard is an expansion to Fantasy Realms, a popular card game that was one of three nominees for the 2021 Kennerspiel. The game is designed 3-6 for players, ages 14 and up, and takes about 20 minutes to play. It’s currently available from your local game store as well as online retailers such as Amazon and sells for a suggested price of $14.99.

Fantasy Realms: The Cursed Hoard was designed by Bruce Glassco and published by Wizkids, with illustrations by Anthony Cournoyer. This team also created the original Fantasy Realms, which is GeekDad approved. You can read my earlier review of Fantasy Realms here.

The 24 different cursed items can be used to take a specific action, either as a replacement for your turn or anytime during the game. Most have a negative number as a penalty which decreases your final score.  However, a couple add to your score but have a penalty that takes place during the game.

The five new building cards form a suit that provides bonuses when in a hand with other suits of cards. Only one of them, Crypt, has a penalty.

The five cards of the outsider suit have some very interesting bonuses or penalties. A couple can provide a lot of points at the end but could end up costing a player a lot of points depending on the other cards in your hand.

The undead are a very interesting suit. Four of the five cards provide bonuses based on the cards in the discard area at the end of the game.

How to Play with the  Fantasy Realms: The Cursed Hoard Expansion

Fantasy Realms: The Cursed Hoard actually offers two expansions to the original game, which can be used together or separately. Players can choose to add the three new suits to the original deck, along with the 8 updated replacement cards as well as add cursed items. The gameplay remains relatively the same with a few changes related to the new expansions.

If you are choosing to add the three new suits to the game, you increase the number of cards in the deck by about 30%, thus diluting the deck and making it a bit tougher to draw combos. Therefore in order to restore balance to the game, players draw 8 cards at the start instead of 7. An eight-card hand is maintained throughout the game. During setup, replace 8 of the original cards with their new updated cards. In addition, the game does not end until 12 cards are in the discard area rather than the 10 from the original game. Some cards allow you to add an additional card at the end of the game before scoring. While a player could have more than one card with this ability, the maximum final hand size is limited to 9 cards.

Since the expansions add an eighth card to players’ hands and the cursed items can modify the total score, WizKids has created a new scoresheet which can be downloaded here.

Why You Should Play Fantasy Realms: The Cursed Hoard

As I mentioned in my review of the original game, I love playing Fantasy Realms. Therefore, when I saw that WizKids was releasing an expansion, I could not wait to get my hands on a copy. I was not disappointed. Fantasy Realms: The Cursed Hoard takes a great game and makes it even better. The cards in the three new suits have some unique new bonuses and penalties and work well with the cards from the original game.  The Genie from the Outsider suit has a base score of -50. However, it provides a +10 bonus for every other player in the game and at the end of the game, you can look through the deck and add any card to your hand. That can be a risky card to keep in your hand but can be very powerful if there are a lot of other players in the game and you can bury a good card at the bottom of the deck by using the Shovel cursed item. By adding an extra card to each player’s hand and allowing the game to last a bit longer, this expansion lets players have a bit more time to work on their hands. Just adding an eighth card allows for some better combinations. 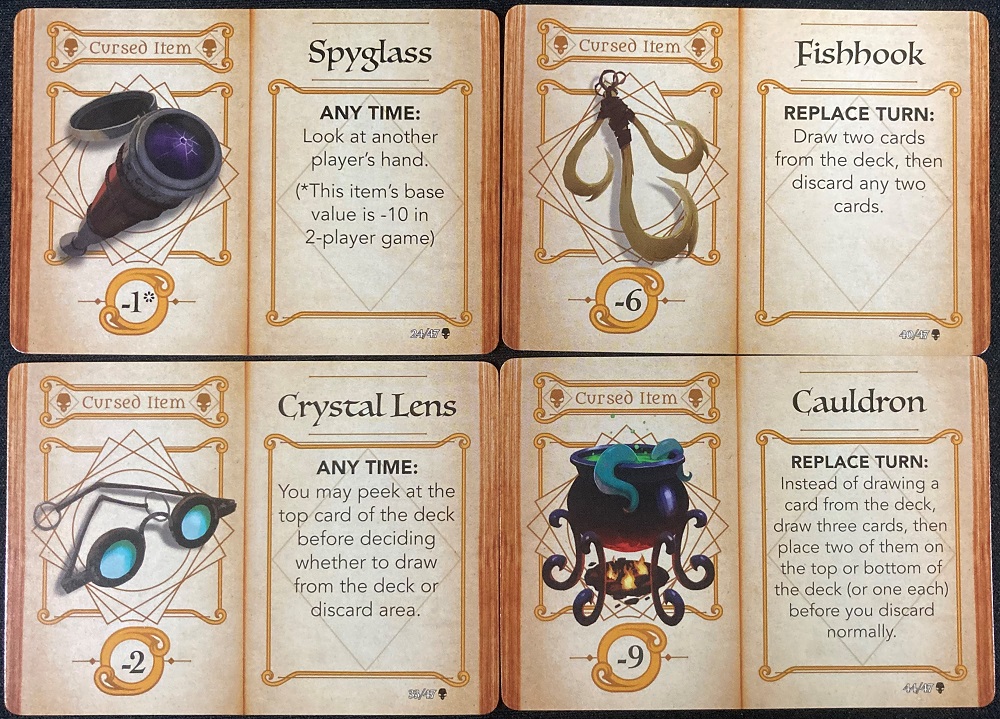 The deck of cursed item cards adds another layer to the game. These items essentially allow you to break the rules and do things you can’t normally do. The downside is that the more of these you use, the more points you lose from your final score. Some don’t take away too many points, such as the Crystal Lens which lets you look at the top card of the deck before drawing so you can decide whether you want to draw it from the deck or select one from the discard area. The more powerful the ability, the greater the penalty. The Cauldron essentially lets you draw three cards and keep the one you want while returning the others to the deck for the cost of 9 points at the end of the game. The Wishing Ring will deduct 30 points from your total, but you can look through the deck and place any card on top. Since you can play this card before you draw, you essentially can use it to get any card you want from the deck. Two cursed items actually give you 5 points each. However, they affect the turn you play them. Blindfold requires you to discard a card first and then draw one from the deck. Sarcophagus requires you to take the top card of the deck and place it in the discard area without changing your hand at all that turn.

As I mentioned earlier, you can play with either expansion or both at the same time. You may want to play with only one at a time at first, so you can get used to the new changes separately. However, once you are comfortable with them, you will probably want to use them both from then on. Fantasy Realms: The Cursed Hoard does a great job of breathing some new life into the original game by adding new possibilities of combinations with the new suits of card and allowing for more player interaction with the cursed items. Along with these come new strategies players can employ. If you enjoy playing Fantasy Realms, then I highly recommend getting Fantasy Realms: The Cursed Hoard. If you don’t have Fantasy Realms yet, then get it as well as the expansion. This game is easy to learn, quick to play, and will leave you wanting to play it again.