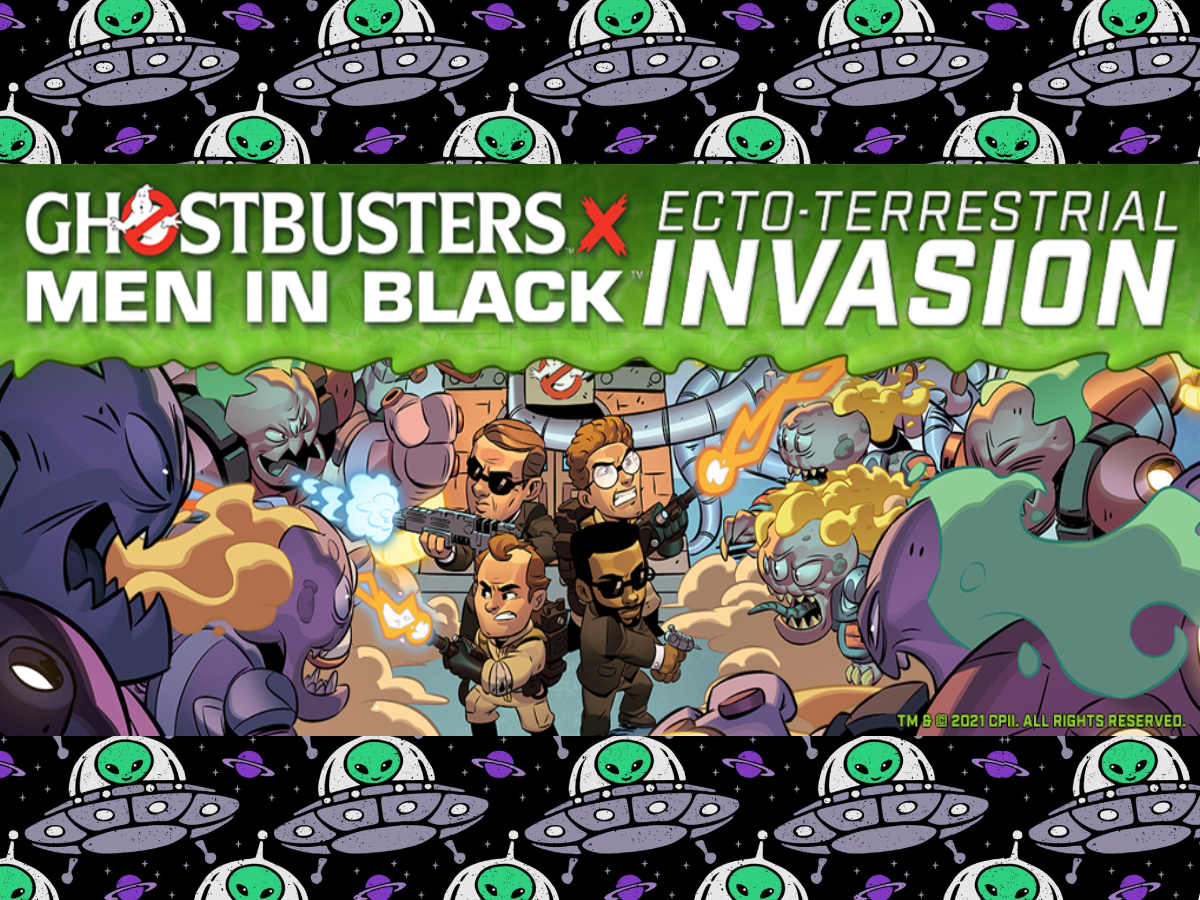 Alien pirates have crashed their cruiser into the Ghostbusters’ Firehouse, damaging the Ecto-Containment Unit. This causes the aliens to transform into alien-paranormal hybrids known as “Ecto-Terrestrials.” Thankfully, the Men in Black are also stationed in New York, and join forces with the Ghostbusters to repel the Ecto-Terrestrial invasion.

What Is Ghostbusters x Men in Black: Ecto-Terrestrial Invasion?

Ghostbusters x Men in Black: Ecto-Terrestrial Invasion is a semi-cooperative campaign-style adventure game for 1-4 players, ages 14 and up, and takes 75+ minutes to play per session. It’s currently available on Backerkit in a time-limited presale, which ends this Friday, July 16th. This is the only way to get the Backerkit exclusive version of the game, which costs $125 and contains several extra components, which are detailed a little later in this article. Copies may also be available this Fall from select game stores; however, these will be the non-exclusive copies without all the bonus content. The game will arrive to both backers and stores this Fall.

Ghostbusters x Men in Black: Ecto-Terrestrial Invasion was designed by Jonathan Philips-Bradford and published by IDW Games and Panda Cult Games, with illustrations by Jose David Lanza Cebrian and Derek Laufman. It also has just about the longest title I’ve ever seen in a board game!

Thanks to both finding out about this game late, and my review copy getting delayed in the black hole that is my nearby FedEx facility, I won’t have a full review of Ghostbusters x Men in Black: Ecto-Terrestrial Invasion for you until after the preorder window closes. That’s why I decided to give some first impressions right now, so that you can try and decide if this is the game for you.

Let’s start with the price point: $125 isn’t pocket change. But Ghostbusters x Men in Black: Ecto-Terrestrial Invasion is also a game with a ton of content. Just in the base game, there are 39 wonderfully-sculpted chibi-style miniatures, 3 of which are oversized boss minis. There’s also a bunch of custom dice, token, tiles, and cards to fill out the  rather hefty box:

You’ll get 6 extra playable characters, 2 extra boss figures, their accompanying cards, and a bonus scenario. And if you’re fans of Ghostbusters and/or Men in Black(and let’s be honest, aren’t you fans of both?) you’re going to want these exclusives. From Ghostbusters, you’ll get Louis Tully, Janine Melnitz, Slimer, and the big boss himself, the Stay-Puft Marshmallow Man. And from Men in Black, you get Frank the pug, Jeebs, the Worm Guys, and Edgar the bug. And they’re all delightful sculpts:

How to Play Ghostbusters x Men in Black: Ecto-Terrestrial Invasion

I’ll be going into a full rules explanation when my review lands. For now, here’s a brief overview of gameplay. If you’d like to look more closely at the rules before backing, you can download a copy of the rulebook here.

Ghostbusters x Men in Black: Ecto-Terrestrial Invasion can be played either as one-off games, or as a short(6-episode) branching campaign where you alternate between basic missions and boss battles. There’s a separate scenario book included with the game which details setup and win/loss conditions for each episode.

Each player controls a team comprised of one Ghostbuster and one Men in Black. Each hero has its own starting weapons, special abilities, and health and defense stats.  On a player’s turn, you’ll have 1 attack and 4 actions total to use with your two characters. You can also forfeit the 4 actions to attack with both characters. You may also team up on an attack with other heroes of the same faction that are in range, if the other players agree. Defeated aliens award both points and Trap Tokens, the latter of which can be turned in for even more points when a player team Rests.

And while you can cooperate with other players, you can also choose to be out for yourself. As one of your available actions, you can attempt to steal Trap Tokens and Objective Tokens from other players. Why would you want to do this? ?They’re worth points, and whichever player with the most points at the end of a scenario gets the Employee of the Week badge. That doesn’t just give you bragging rights, it also gives you more money to spend on new gear for your next game. Unless you lose the scenario, that is. When that happens, every player gets the minimum amount of cash to buy gear, and a “Disastrous Hot Sheet” is inserted into the Hot Sheet Deck. The Hot Sheet Deck is essentially an event deck that gets drawn from one or more times per round, and a Disastrous Hot Sheet is as bad as it sounds.

Hot Sheets will also raise the PKE levels of the 3 different Ecto-Terrestrial types. Whenever any of the levels reach the maximum level, one of the pieces of spaceship stuck in the side of the Firehouse is removed. As several dice are pre-loaded into the Firehouse during setup(with more added at various times during gameplay), this may cause one or more dice to tumble out of the Firehouse. This is called a “Psychokinetic Disruption,” and will result in more Ecto-Terrestrials appearing on the game board.

And don’t think you’ll just be hunting Ecto-Terrestrials. They’re hunting you, too! They get their own phase in the game, where they’ll be attacking and wounding heroes. One of your heroes is defeated when they take wounds equal to their maximum as shown on their cards. They’re not eliminated from the game, though. Even though you’ll lose some points, when your team Rests, you’ll be able to bring those defeated heroes back onto the board.

Why You Should Back Ghostbusters x Men in Black: Ecto-Terrestrial Invasion

I haven’t had too much of a chance to play yet, but I really like what I see so far. Ghostbusters x Men in Black: Ecto-Terrestrial Invasion has gameplay that’s reminiscent of two other games that I enjoy, Arcadia Quest and Zombicide. I love that as a player, you take 1 Ghostbuster and 1 Men in Black. The factions in general have different strengths and weaknesses, but you’ll also gather gadgets throughout the game, many of which can only be used by either a Ghostbuster or an MiB, not both. Each turn you only get 4 actions and an attack as a player, not per hero. You must make the decision on how best to divide up those resources between the two heroes you control.

Combat is quick and easy to resolve. You just roll as many dice as your weapon shows. Matching alien results equal wounds those aliens take, with crits being wilds. And when the Ecto-Terrestrials attack you, you instead roll dice to defend against taking wounds from them.

The dice tower adds a nice bit of frenetic randomness, as well. Much like games of Kerplunk, when you pull out a piece of spaceship, you’re waiting in dread anticipation to see if anything drops from the tower. And those Psychokinetic Disruptions can happen when you least expect. Jostle the table and some dice fall out of the tower? Well, guess what…some more Ecto-Terrestrials are going to be hitting the board.

As I’ve mentioned before in other reviews like the one I did of Marvel United, not everyone is a fan of chibi-style miniatures. But I think the style used here is charming and fun, with very characterful sculpts. And perfect for a game the whole family can enjoy. While the game is rated 14+, I think it can definitely be played by younger kids, especially if you choose to remove the “take that” aspect and play it as a fully cooperative game.

So there are some early thoughts I had on Ghostbusters x Men in Black: Ecto-Terrestrial Invasion. I’ll be following up with a full review in the coming weeks, but in the meantime, hopefully this will help you decide if you’d like to preorder the game on Backerkit. The preorder exclusives will definitely add to the replayability of the game, and feature some fan-favorite characters from both movie franchises.

GeekDad Puzzle of the Week: Murder at the Goblin’s Tooth