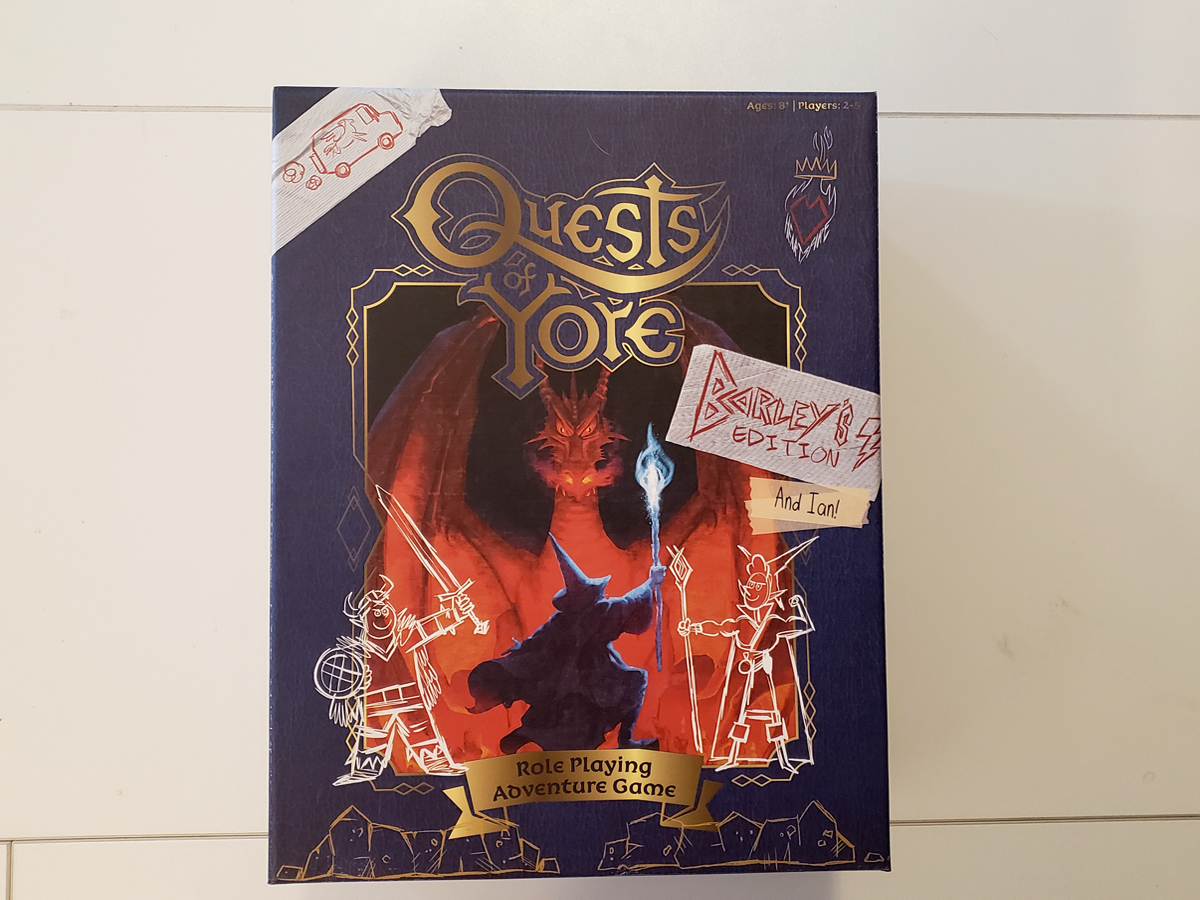 When Onward released last year, it immediately became one of my favorite Pixar movies. Our whole family enjoyed it, especially as my husband and I have been part of the same tabletop gaming group for over fifteen years. So when the Op announced a tie-in version of the Quests of Yore RPG that was so beloved to Barley I knew we had to check it out, especially as this was designed for our kids to be able to play. The Op recently sent me my own copy of Quests of Yore: Barley’s Edition for reviewing purposes.

What Is Quests of Yore: Barley’s Edition?

Quests of Yore: Barley’s Edition is a tie-in adaption of the Quests of Yore role playing game game featured in Pixar’s Onward. It is designed for up to 5 players (including a Quest Master) ages 8+ and takes about 90+ minutes to play. It has a MSRP of $49.99 and will release on May 12, but can be pre-ordered right now on the Op site.

Overall, this is a pretty nice set-up for the price range. The Advanced Player’s Guide and Tome of Quests are softcover books that open up nicely for quick look-ups during the game. The Advanced Player’s Guide is 80 pages of breaking down how to play and navigate different situations in the game and includes a section for Quest Masters who want to generate foes as well. The Tome of Quests has a total of 12 ready-to-go adventures designed to carry players through the different Reputation Levels.

The various cards are the typical game card thickness I’ve come to expect and have beautiful tie-in artwork that should definitely appeal to Onward fans. I actually really like the use of the Power, Spell, and Item cards for keeping track of those stats. It’s really easy to hand the card to the Quest Master to make a quick reference on rather than scramble through a bunch of pages in a book to look things up. I actually feel like I need to make a set of those for myself for the Pathfinder campaign we’re playing in our weekly group.

The Tokens and the Tiles are thick cardboard with really nice artwork featured on them. The Hex Tiles are used in place of a gaming mat,  and I feel like their larger size was a lot easier for my kids to work with. Since there are situations where characters can occupy the same hex, this left plenty of room for more than one figure.

Six unpainted plastic miniatures also come with the game. It’s impossible to represent every character possibility with these options, but there are figures that match the pre-generated character sheets. For people who like painting their own minis, this isn’t an overwhelming amount to do. They’ve got a decent amount of detailing to them too.

The various dice come in different colors for ease of identifying which die to use in which situation, and are the same polyhedral dice you see in other similar games.

The game also comes with a full set of blank character sheets as well as a set of pre-generated characters. The information is all nicely organized and quick to find.

Overall, it’s a nice set of component pieces and really does have everything you need to begin playing.

How to Play Quests of Yore: Barley’s Edition

I would like to note that while most players learn as they play, the Quest Master should probably set aside time to read both the Advanced Player’s Guide before running a session as well as whichever adventure in the Tome of Quests the group will be undertaking before the play session.

Character Creation is actually nicely streamlined. You can go with the pre-generated characters, but it didn’t take long at all to run our kids, including the first grader, through making a character. The character stats do not include the saving rolls of other systems or a separate set of attack/defense stats. Unlike d20 based systems, this system is built on higher stats equaling higher valued dice in your dice pool. Rolls for Players are a combination of the relevant Approach and Technique (Equivalent to Attributes and Skills in other systems). The Approaches include Bravely, Cleverly, Patiently, Quickly, and Socially. Techniques include Aim, Brawl, Cast, Distract, Exert, Fight, Investigate, Loot, Mend, Network, Parley, Recall, Stealth, Treat, and Wield. Grit takes the place of Hit Points and Heart’s Fire allows Players to do more difficult things like activate Powers or cast Spells. There is also Lion’s Will for truly exceptional actions.

To create a character, players take the following steps:

Overall, the process is pretty fast and simple. I will admit that while I had my Players select their own Background and Species combinations, we used the suggested Equipment/Power Card combinations for ease.

Players can also Roll to Support or use an Item to add dice or shift which die is used. The Quest Master can also shift the die level if there are additional circumstances impacting the action.

Trials are situations where turns need to be kept track of and can include combat. Player Turn Tokens and Adversary Tokens are flipped to keep track of who has and has not has a turn. There’s no Initiative Roll. The Quest Master determines who goes first and the last person who had a turn chooses who goes next.

On a turn, an entity gets to pick 2 of the following actions:

The biggest thing to remember is that the Players do most of the dice rolling. If something comes down to chance, the GM rolls the Runic Wheel (d20) to determine outcome. Otherwise, the stats the adversaries use do not require rolls.

Adversaries have stats for their defense number based on the style of the attack. Players need to beat this number with the relevant Approach and Technique combination. The difference between the Player’s roll and the Target is compared to the Risky Action Chart. A poor enough roll can result in a Player loosing Grit. Some adversaries can roll to reduce damage.

When an adversary attacks, they use the static stat for the appropriate attack type. However, the Player rolls to defend. The Player’s result is compared to the Risky Action Chart as well. Again, both sides may roll to reduce damage.

Risky Action Results are as follows and are compared to the Target number.

Fortune and Ruin are extra bad or extra good things that are at the Quest Master’s discretion and could impact Grit, Heart’s Fire, Dice Shifting Up or Down, etc.

If all Characters become Exhausted (run out of Grit) by the end of the Quest, the Quest is failed and they must retry it. Otherwise, they have completed the Quest. Players then gain a Reputation box and get to add a point to a Technique (No Technique above a d8 for Novices and Wanderers though). If they rise to a new Reputation, they get to add to an Approach and choose to gain 1 Heart’s Fire and 2 Grit or 1 Grit and 2 Heart’s Fire. Additional Gear choices may open up too.

Why You Should Play Quests of Yore: Barley’s Edition

Overall, this is a great RPG for families, especially with kids, as well as being a wonderful tribute to the source material. We played through the Prologue, which allowed me to test out running a campaign after having been only a Player for so long. It also gave my two sons (ages 7 and 10) a chance to get their first solid RPG experience. They got to take on a social situation, a trap-based situation, and a combat situation. The Tome of Quests gave me some nice guidance notes as a first time Quest Master too.

The components are really nice and I love having everything ready to go for play in the box. The two books did a solid job of explaining everything to me as well. It did take me a bit to wrap my head around “the Quest Master rarely rolls” nature of the mechanic, but I got there. Character creation was really a breeze, and the Player age suggestion of 8+ was easy to lower for my 7-year-old because of the cooperative nature of the game. I probably would not set a 8-year-old as Quest Master though. I really got to pull in all that experience as a former theater kid for doing voices as a Quest Master too. My kids struggled a touch with creating personas for their characters, but they started adapting over time, and my 10-year-old even has a battle cry for his Warden now.

My favorite aspect was probably the cards for Items, Powers, and Spell. The kids could hand it over if I needed to check how it worked rather than scrambling through books and I loved that. I may need to adapt it for other Tabletop RPGs we play.

If a family wants to make their first attempt at playing a Tabletop RPG, this would probably be an easier one to start with than most. If you want to introduce kids to Tabletop RPGs, I think this is a good one to look into that’s exciting enough for the pre-teen crowd and older elementary-aged kids, but not too intimidating for early elementary school kids with some support.

Quests of Yore: Barley’s Edition officially releases May 12, but you can secure a pre-order copy through the Op here for $49.99.

Click through to read all of “Tabletop RPG Review: Quest or Die in the ‘Onward’ Inspired ‘Quests of Yore’ RPG” at GeekMom.If you value content from GeekMom, please support us via Patreon or use this link to shop at Amazon. Thanks!

The Case For Community College