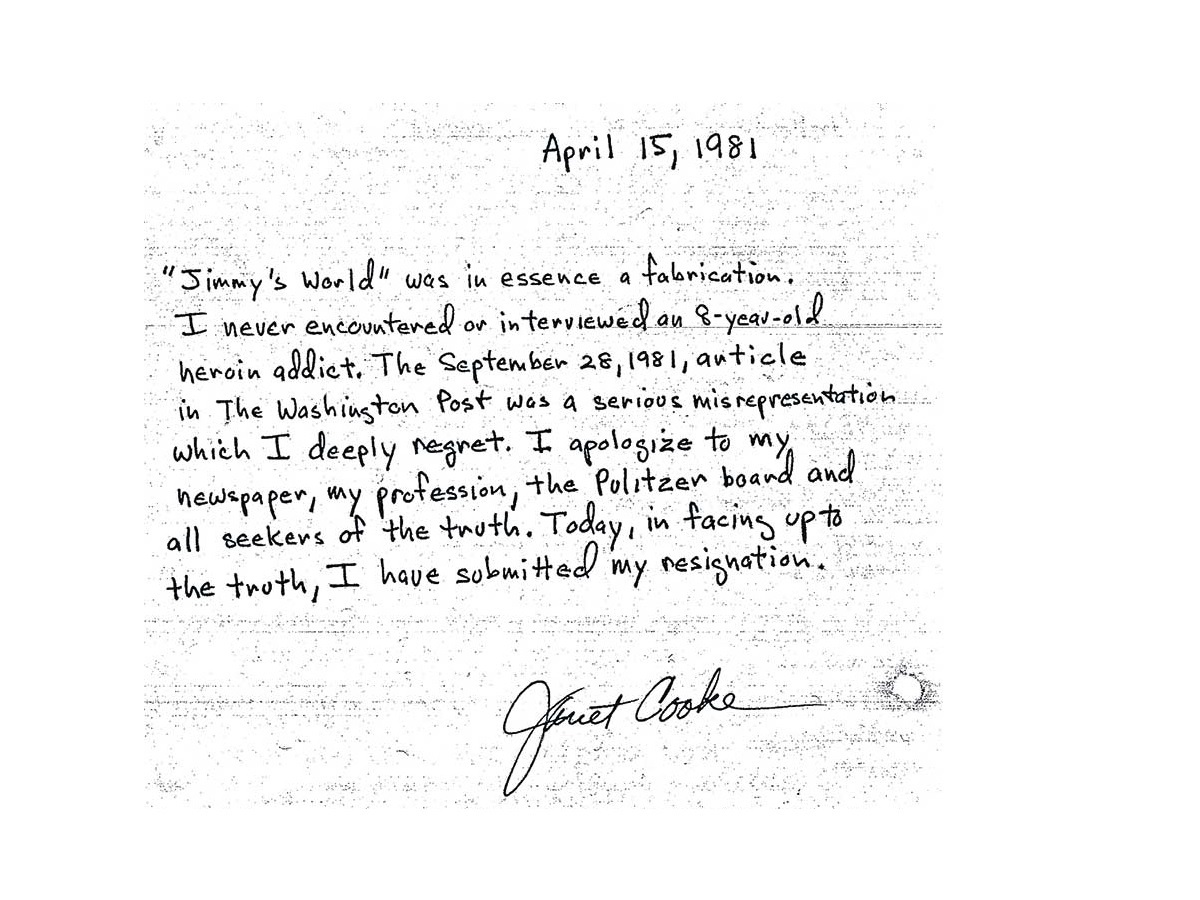 I was not aware of the fact that a beautiful black woman had earned a Pulitzer in 1981, that her story Jimmy’s World was entirely fictional, and that she had to give the prestigious prize back. It happened 40 years ago, but this event has had far reaching consequences for both journalism as a whole, and for the African American journalist community in particular.

Mike Sager personally knew Janet, briefly dated her during the time where the events took place, and had her permission for the only interview she gave on the subject when it exploded in the face of everyone at the Washington Post.

The fact that a white male is explaining what happened to this black woman has been really unsettling to me, but he was the only person she gave permission to do so, and according to Wikipedia, they both sold the rights for the movie adaptation, after all. This entire story feels so weird.

After some digging around, it turns out that this story is unsettling for everyone, and is even studied in Ethics courses in Journalism. It is presented as one of the major blows to journalism in the history of The Washington Post, the same journal that had brought America the Watergate Scandal. No one trusted journalism quite the same way, after this. And the facts are that Janet Cooke was a liar: she lied herself into the job, faked her credentials and invented an award winning story, and this might be the only investigation that might attempt to explain why.

But, how did this happen?

Mike Sager is an incredibly accomplished writer, and with Neo Text he is reviving some of his best work. Here, with Janet′s permission, he interviews her and lets her talk: about her upbringing, the undoubtedly huge pressure her father exerted on her, ever the over achiever, and how she found and escape in journalism; all in a time and a place that seems preposterous, impossible and not Washington DC at all, but might spark a lot of thought and conversations about racism, sexism and the perfect image of what an African American should be, four decades ago.

You can read a resume of the story and the complete fictional tale, Jimmy’s World, here.

After penning the fake story, one that she felt she had to deliver because of the mounting pressure she brought upon herself at her job, the consequences where really far reaching. The police launched an all-out investigation in search for the kid, the major of Washington was personally shocked, and, as Janet herself says:

“I was astonished by the attention I got. I was uncomfortable. I just wanted it to go away. It was a real lesson for me, in a lot of ways. It was a lesson about the power of what you write. Not so much the power of the press, but that, you know, people really do read the newspaper and don’t just put it in the bottom of the birdcage. And I realized that people out there, the readers, weren’t as shitty and misanthropic as you come to believe. The shitty and misanthropic ones are the journalists themselves. Reporters really do have this attitude that they are a room full of people who know more than anyone else, who are better than everyone else. They think only they know what’s important and who’s important and which world view is true. Let’s face it. You get warped in a business where death lands you
on A1 and thirty injuries gets C6. There’s a bus crash and you keep calling the hospital.
‘Did anyone die yet?’ Because the minute someone dies, the story’s value goes way up. The more gloom, the more doom, the higher the profile, the more play. The worse it is, the better it is.
“Out in the real world, everybody was saying, ‘How can we help the kid?’ I felt horrible about that. Really ashamed. I had taken these people for an incredibly emotional ride. I got letters saying, ‘Oh, your story made me cry. How can I help?
I have an extra bedroom.'”

This is why I’m talking about it. Because the story is worth telling, however uncomfortable, and because we glorify the winners and never strive to understand the losers, and because all I felt after reading it was a huge amount of empathy for a woman that was born to soon and who couldn’t find herself, and I hope life has got better for her.

In some ways, this story reminded me of Monica Lewinsky, and how she has forgiven herself, standing up for herself, deciding not to change her name, even though with public condemnation as the type Janet Cooke faced, perhaps that is everything you might want to do. Disappear, and hope to die of shame.

“In the course of this story, Janet has been portrayed as an unhappy child, an alienated young woman, a talented reporter, an infamous liar, a compromised exile, a nearly destitute shop clerk. A woman who was damaged by a bitter parent, who was himself damaged by the ugly history of race relations in this country. A woman who learned deceit as a means of survival at an early age; who never had a clear view of her capabilities
or her place in the world; who lived much of her life, perhaps, on the verge of a nervous breakdown. The startling beauty who sashayed into the acre-square newsroom that January day has been reduced, in stages, to a forty-one-year-old divorced department store worker sitting at the kitchen table with a bowl of cereal at her elbow, chewing her nails (real now—acrylic is too expensive), brow knitted over her checkbook, trying to decide whether to pay her rent or her car note this month”.

That is what Sager said 25 years ago. Who knows how Janet Cooke is doing now? 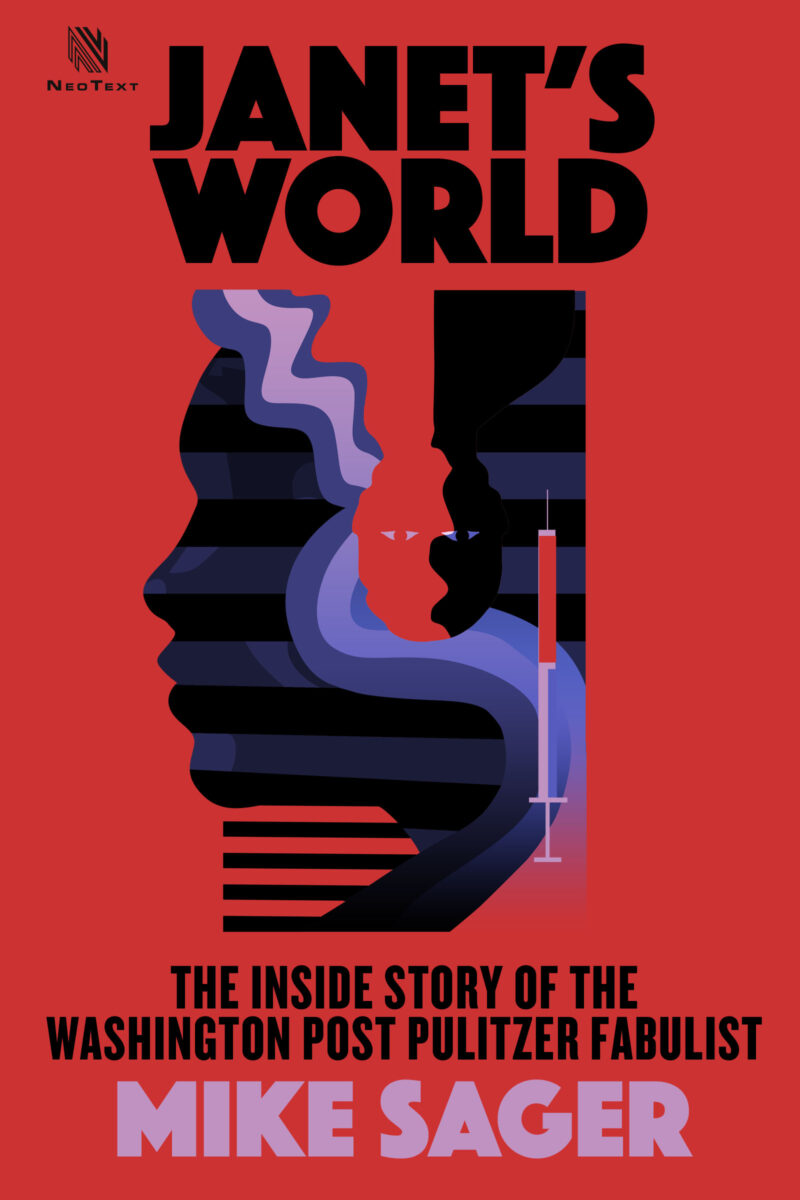 ′Janet’s World: The Inside Story of Washington Post Pulitzer Fabulist Janet Cooke′ is on sale since February 23, 2021.