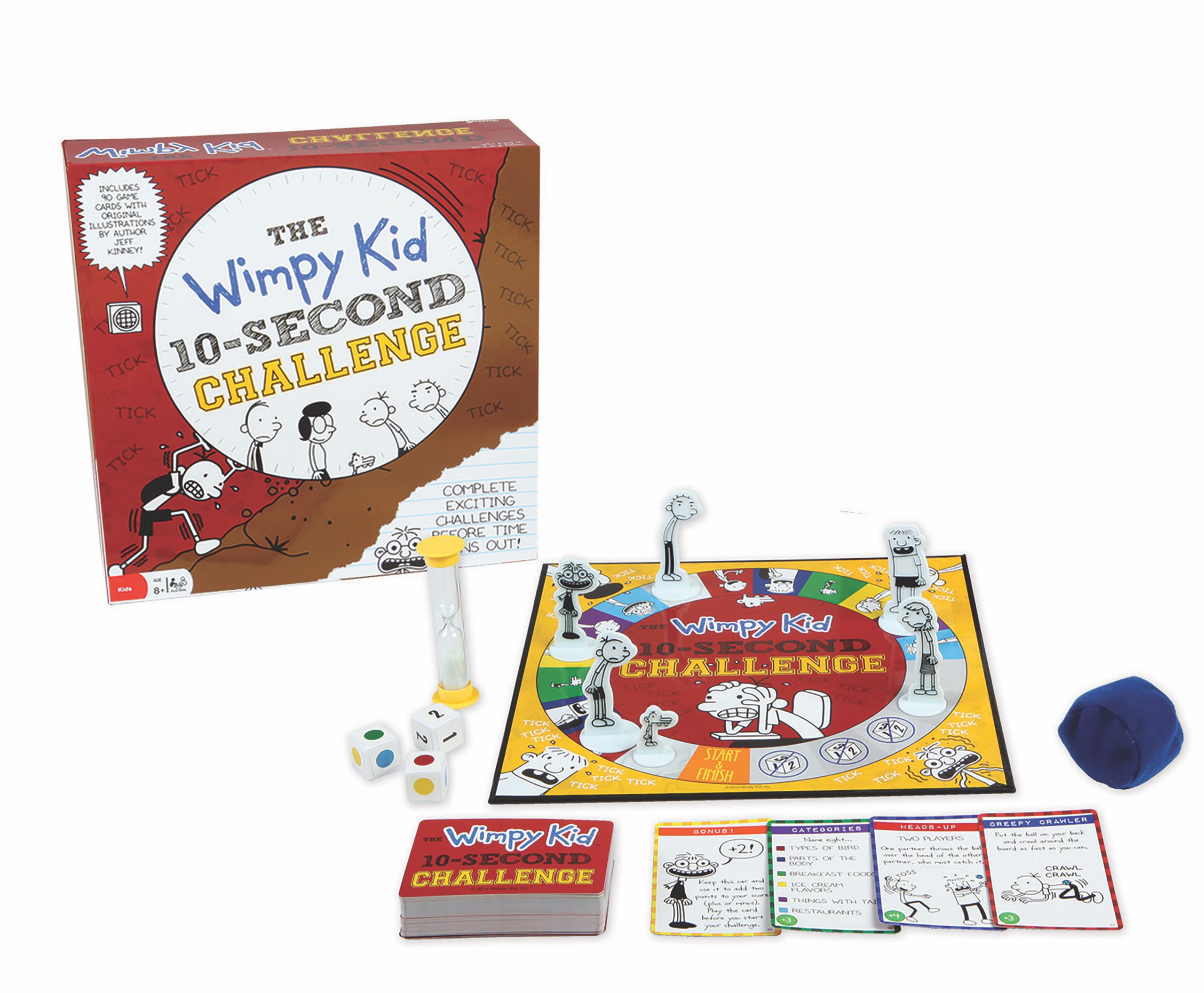 My eight-year-old daughter, probably like your child given its bestseller status, is a huge fan of the Diary of a Wimpy Kid series. She also, again probably like yours, enjoys games. So I eagerly jumped at the chance to review two new board games based around Jeff Kinney’s much-loved franchise, and our family has had fun playing them.

Diary of a Wimpy Kid: 10-Second Challenge is reminiscent of Cranium and other “take this challenge” party games in that you progress by completing tasks of various kinds, from “name 8 countries” to “draw a monster” to “balance these three things on your head.” As the name implies, you have 10 seconds to complete each task. If you succeed, you advance the number of spaces the card tells you. If you fail, you go back one. Some of the challenges require two people simultaneously, and both players get the same reward or penalty. In theory, that might lead to grumbling, but it wasn’t a problem for us. The nice thing about this game is it’s pretty well leveled for kids and adults to play. I lost to my daughter both times we played, but my wife beat her the time they played. If you don’t know the series well, there are occasional cards where you might be at a slight disadvantage, but in general anyone will be able to compete. The game is rich in Wimpy Kid artwork, including some original to the game.

No series knowledge is required, however, for Diary of a Wimpy Kid: Flipping Frenzy, which is a free-for-all of card-grabbing. In this game, you spread out the cards, each of which features one of four characters and one of four colors, in a big jumble, and then everyone grabs a card and decides whether or not to keep it. At the end, you look for the longest chain in your stack in which no two colors and no two characters are adjacent. In practice, this means you have to keep your last card in mind as you find new cards, to ensure you don’t duplicate either of its elements. This game I had a much easier time with than my daughter, and was able to build chains of basically every card I picked up. So it may work better for a group of kids rather than a kid and an adult.

Both games work okay with 2 players, but 3 players make the games more interesting and fun. Two-player activities in 10-Second Challenge almost require a third player to start the timer, and more players in Flipping Frenzy would create more chaos and confusion and make it harder to keep your cards straight.

Kickstarter Tabletop Alert: ‘Terminus Breach TD’ Is Back, Better Than Ever