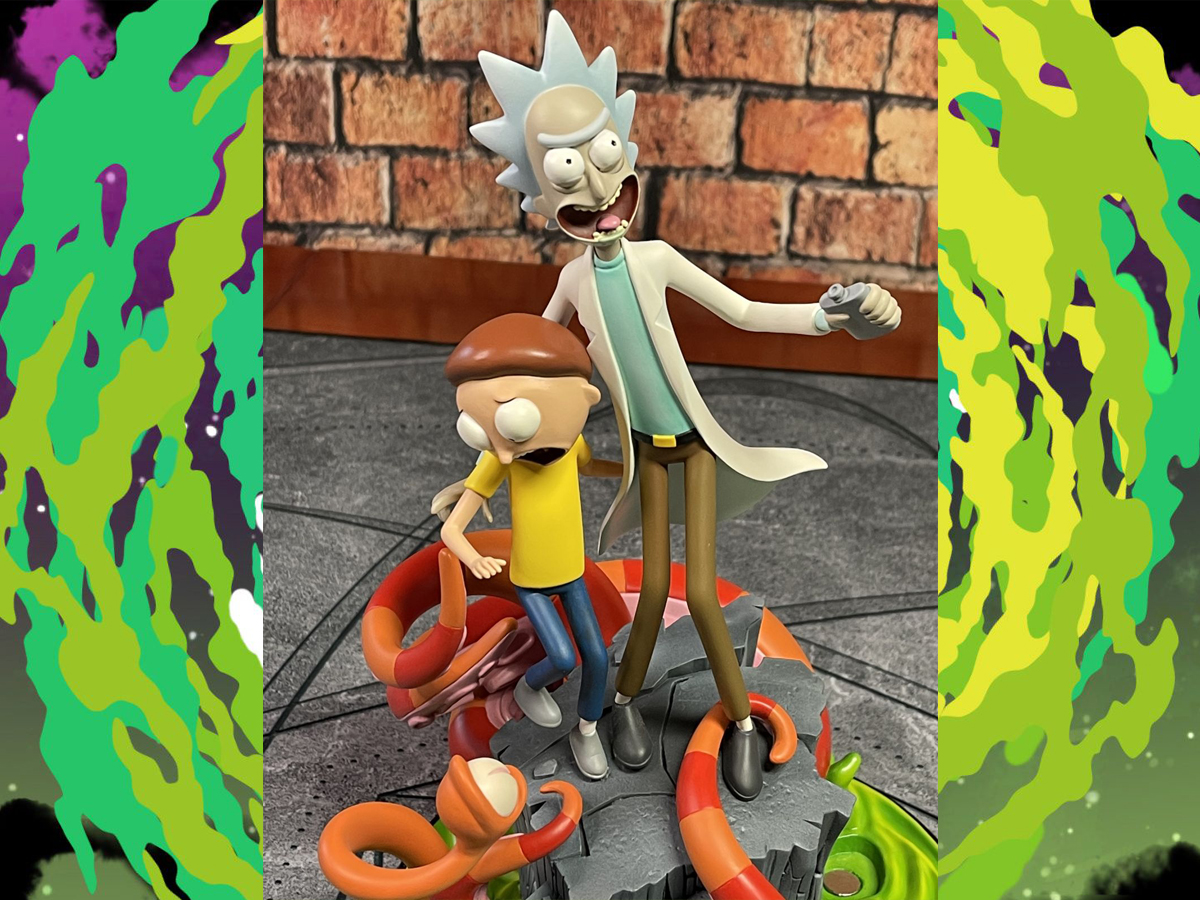 Springing from the feverish imaginations of Justin Roiland and Dan Harmon, Rick and Morty landed on Adult Swim in December of 2013, to the delight of comedy fans and critics everywhere. In the course of 4 seasons, there have been toys, games, puzzles and more produced from the hit series. And now, Mondo introduces the first polystone statue of the eponymous duo.

The statue arrived in a standard cardboard mailer. Inside were foam protectors at every corner of the statue’s box, to help protect it during shipping. This was very effective, as my statue arrived in pristine shape.

The front of the box is a characterful illustration by Florian Bertmer, depicting Eric Siebenaler’s design for the statue. You can also see the Mondo exclusive seal embossed on the box.

The back of the box shows the statue itself.

Opening up the box, you’ll find a styrofoam clamshell. This one is embossed with the Mondo name and logo.

The two halves arrive sealed with packing tape. I ran the blade of a utility knife between the two pieces of the clamshell to cut the tape, and then removed the top.

Inside, you’ll find all of the individual pieces of the statue, each wrapped in plastic. Some of them, like the figure of Rick, have a bit of soft foam to give an extra bit of protection. A little tip if you get this statue: take a photo like the one above. That way, if you ever decide to put the statue back in its box, you’ll know where all of the pieces fit without having to use trial and error while repacking.

Next up, it was time to put the statue together. I started with the base. Though it fit securely inside the styrofoam, it was easy to remove. It’s a solid, hefty piece.

You can see there are metal pegs to attach the figures of Rick and Morty, as well as magnets to hold both the regular tentacles and the alternate tentacle clutching Squanchy.

Next, I unpacked the rest of the pieces.

You’ll notice that Rick is missing one of his hands. That’s because there are two different hands that you can use: one holding a raygun, and another clutching Rick’s flask.

The two magnetized tentacles pictured above are the same as those in the regular edition of the statue, but in that edition, they are glued into the base. In this case, they are magnetized to allow you to swap one of them out for the exclusive Squanchy figure:

The bases of the magnetic tentacles are shaped in such a way that they are impossible to insert wrong. It was just slightly tricky getting Rick and Morty onto their bases, because of their figures’ positioning. The key is to place Morty before you place Rick.

Once put together, the assembled statue stands 12″ tall and weighs 10 pounds.

As a fan of Rick and Morty, I was overjoyed to find out that Mondo was producing a statue from the show. And I was even more overjoyed to find that the statue lived up to my expectations. Once again, Mondo has hit it out of the polystone park.

This is thanks, in no small part, to the excellent design work of Eric Siebenaler. He’s created a dynamic piece that captures the feeling of an episode of the show. You could easily imagine this very scene playing out in the Rick and Morty title sequence. It will probably come as no surprise to you that Siebenaler also designed the Jake and Finn statue from Adventure Time.

Of course, great design is nothing without a great execution of said design. The sculpt and paint work by Tufan Sezer and Mara Ancheta perfectly capture the look and feel of the animated show in three dimensions. Both Rick and Morty look exactly like they appear on the series. And I’d like to give a special shout-out to both artists’ work on the green goo surrounding the base, which really establishes that the action is taking place on an alien planet somewhere.

I love that there are a few options you can choose from when displaying your statue. Even if you get the standard version, you can still choose between Rick holding a flask or a raygun. The sculpt of the exclusive Squanchy is terrific, and is nice to have as an option as well. However, the composition of the standard statue is so strong, that I’ll probably display the piece without Rick’s good friend.

If you’re a fan of Rick and Morty, you’re going to want the Mondo Rick and Morty statue on your shelf. The fine work that all of the artists put into this piece is impeccable: it really captures the look and feel of the show. I only wish that there were a few more characters from the ever-growing cast appearing on the statue, like Birdperson, Mr. Poopybutthole, or Jerry. But I suppose that just means Mondo will have to make a bunch more Rick and Morty statues to accompany this one!

Note: Mondo provided this statue for evaluation, but had no input into this review. 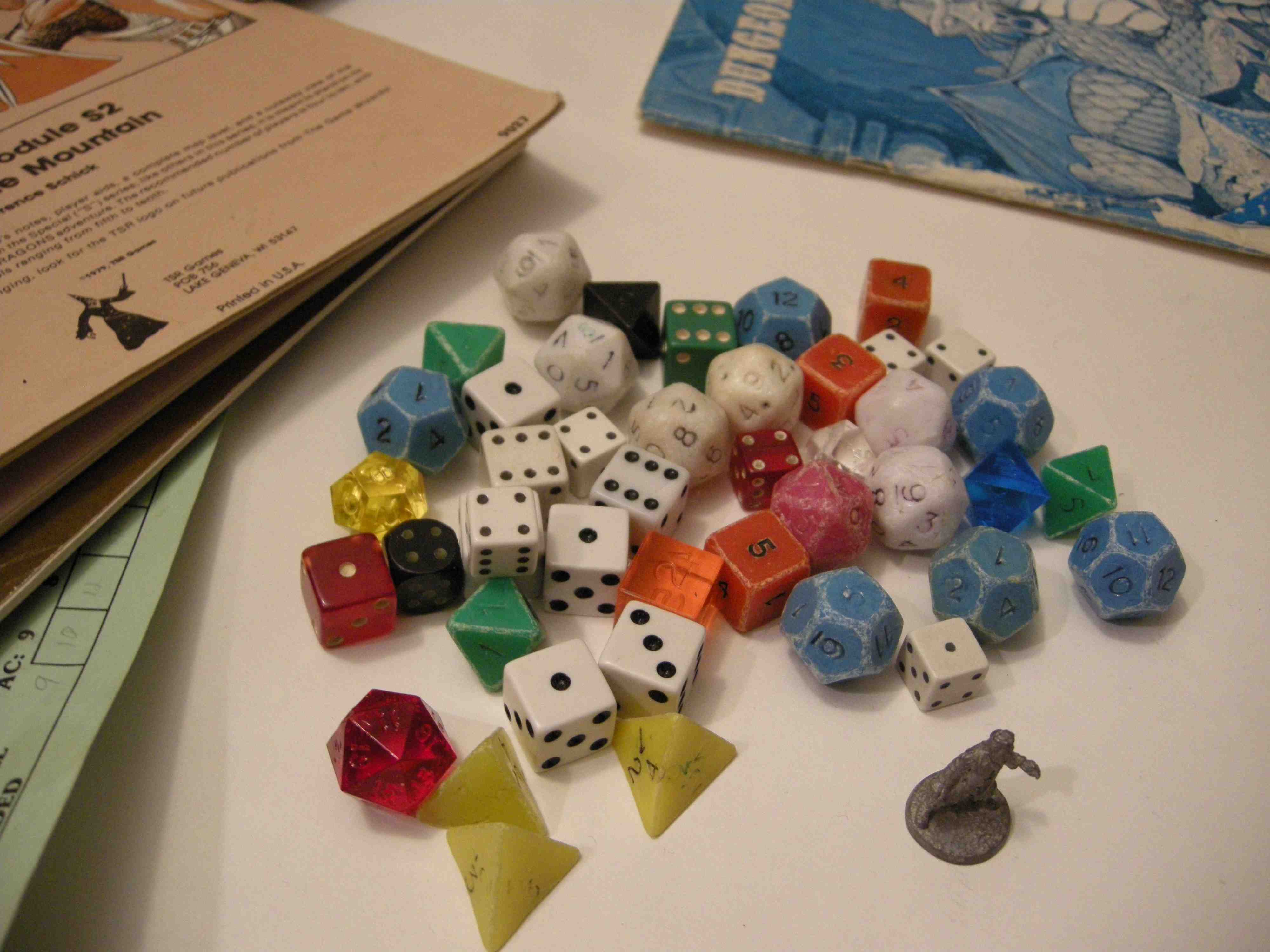 Pajaggle: An Amazingly Addictive Puzzle Game Anyone Can Play