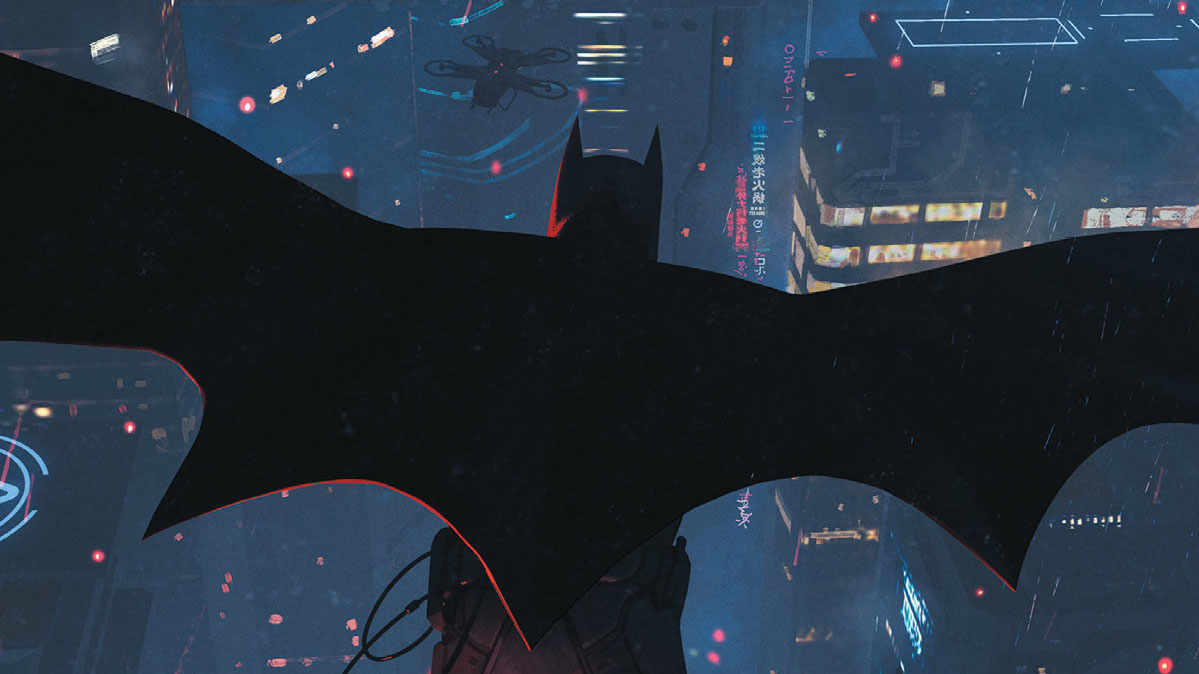 Ray: It’s the first giant-sized anthology coming out of Future State—and the biggest, as we get the much-hyped debut of Tim Fox as the new Batman. So how do the three stories in this volume shake out?

First up is John Ridley and Nick Derington on “The New Batman.” Set in a near-future Gotham where an unseen villain named the Magistrate has taken over and outlawed all masks—on punishment of death—a new Batman patrols the streets, saving criminals from themselves and outwitting the Magistrate’s private cops. We don’t see his face, but we know who the new Batman is—and much of the issue is centered around the complex family dynamics of the Fox family. Lucius is nowhere to be found, Luke and prodigal son Tim (or “Jace”) are on the outs, and Tam is in a coma after relapsing (no details given). A little disappointed to see Tam sidelined again, but we’ll see if more is planned about this. Meanwhile, two teenagers are inducted into a Bane-themed street gang and given a deadly initiation task. The Nick Derington art is fantastically gritty and the new Batman has a compelling inner voice, but with only four issues to tell this story, I was expecting a bit more out of the first chapter.

Next up are Brandon Tomas and Sumit Kumar on Outsiders, essentially a direct sequel to Batman & The Outsiders. Set in the same timeline, it focuses on Duke Thomas and Katana sabotaging the Magistrate on opposite sides of the barriers keeping Gotham isolated. The two former allies have a tense relationship but work together to save innocents, and Katana soon finds herself challenged by the return of the villain Kaliber. While Kaliber is still a pretty generic foe, Brandon Thomas uses his grindhouse-action instincts here to deliver some truly stunning action segments with Sumit Kumar’s art. There are some unanswered questions about how their powers and abilities have evolved since the last time we saw them, and the shocking return of another Outsider at the end of the issue makes me wonder how only one more chapter will be enough for this, but it’s a strong start.

Finally, it’s Arkham Knights by Paul Jenkins and Jack Herbert. This continues the battle against the Magistrate from some unexpected faces—the villains of Arkham, led by Astrid Arkham. The young supervillain has become a cult leader, turning a motley collection of maniacs including Clayface, Zsasz, Doctor Phosphorous, and Anarky into an army that takes on the Peacekeepers—the Magistrate’s elite soldiers. While the bulk of this story is action, there are some surprisingly strong scenes that show Astrid Arkham has evolved as a person and may be—in a twisted way—dedicated to healing her fellow villains. The induction of Killer Croc into her collective has a lot of promise, and this one has a nice eyes-on-the-street vibe for the battle against the Magistrate. Overall, this look at a twisted future Gotham is pretty compelling, even if we need to learn a little more about the Magistrate’s regime for me to fully judge how strong they are as a villain.