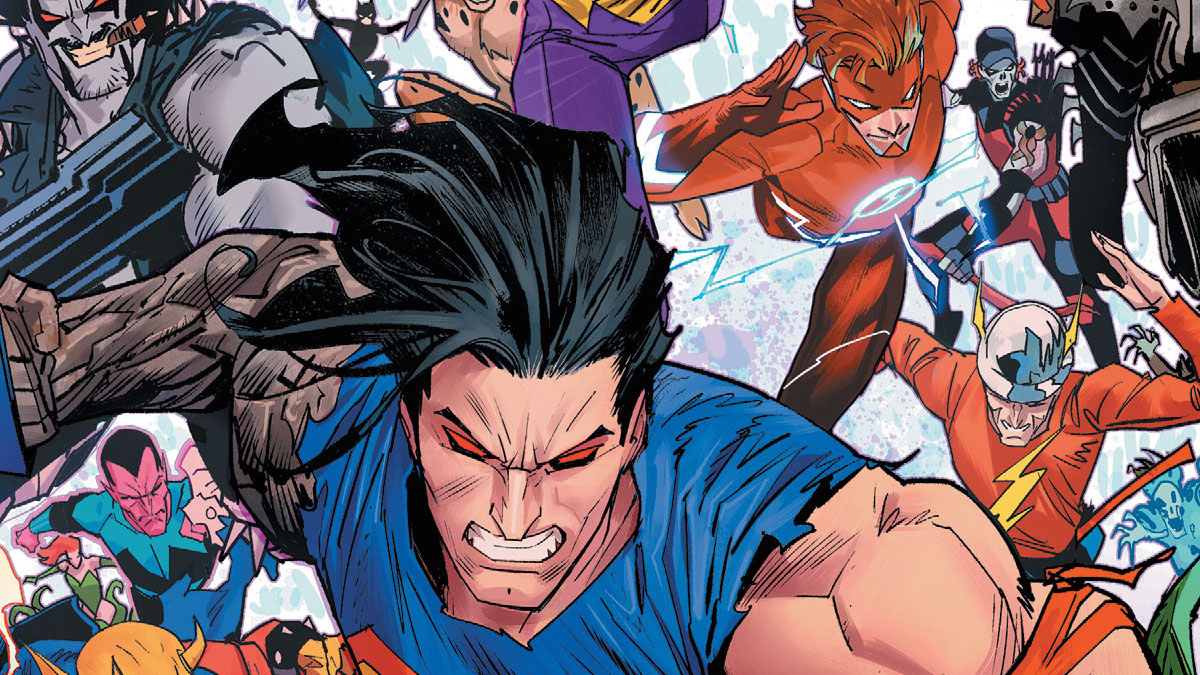 Ray: Dark Nights: Death Metal is just about to wrap up next week, but there’s one last anthology before we go. This one promises to cover the entire multiverse, and brings with it an elite team of creators.

First up is a Wonder Woman-centric story from the three architects of this event—and it’s excellent. Taking place right after the events of the last issue, where Wonder Woman returned with the power of the Gods, this focuses on the heroes starting to turn the tide. The reunion of Wally West and Roy Harper from the last anthology also plays out here, as does the new dynamic between Sinestro and Hal Jordan. I’m a bit surprised these scenes didn’t wind up in the main mini, but I’m glad the creators found a place for them. Despite the epic action, there’s a great lived-in vibe to these character dynamics.

Next up, Mags Visaggio and Paul Pelletier take on Superman, in a story that pits the entire Super-family against a quartet of brutal alternate Supermen. While Steel and the kids battle a trio, Superman tries to save a mysterious, silent Super known as the Last Sun. It’s a good testament to just how far Superman will go to preserve life and save those who he believes in, and the twist of just who comes to the rescue is clever. This isn’t the first great Superman short Visaggio has written either—she has a great handle on the character.

James Tynion IV and Alex Maleev take on Batman—and Batman, in a reunion with the Batman who Laughs. As Batman and his family wage a last battle, Batman resurrects his twisted doppelganger as a Black Lantern, kicking off a hilariously dark battle of wills between them. The only person who can outthink a Batman is another Batman, and there’s some great dark humor here that’s reminiscent of a Tom and Jerry cartoon. Tynion wrote the Batman Who Laughs’ first full story, so it’s only fitting that he returns for the last, and we know he’s an excellent Batman writer.

Next up are Kyle Higgins and Scott Kolins on a story focusing on the scientists of the DCU—namely Ryan Choi and Michael Holt. The second Atom takes the lead here, dealing with a crisis of faith as he and Terrific try to pull off a last-ditch plan involving the Metal Men. But when Ryan’s own alternate-reality evil duplicate shows up, the stakes get much higher. Ryan got some good development in Steve Orlando’s JLA run a few years back, so it’s good to see him get another big heroic spotlight here.

For something completely different, Regine Sawyer and Alitha Martinez take on a Lois Lane story covering the civilian view of the war. Unfortunately, this one doesn’t really work for me at all. It pits Lois against a deranged alternate version—not the one from the Tales of the Dark Multiverse one-shot, but something worse. This one became an anti-superhero radical after her son was killed in a supervillain attack and has massacred most of her world’s heroes. The reappearance of Maxima is a nice touch—that’s a character that more could be done with – but our Lois spends most of the story being strangled and threatened.

Che Grayson and Pop Mhan are the team on a Raven spotlight issue that has the Titans pitted against a twisted alternate team that sided with Trigon and were transformed into monsters. This is a good opportunity for Raven to confront her inner fears that she’ll succumb to her demonic heritage—and prove them wrong in a dramatic showdown with her evil self. This is a little by the numbers, but with great visuals. I hope this puts a bow on Raven’s stories all coming back to Trigon—she’s so much more than that and I hope for more spotlights for her.

I wasn’t expecting a Penguin story here, but Marguerite Bennett and Inaki Miranda have a compelling hook. Oswald Cobblepot has been one of Gotham’s constants, the one villain Batman is rarely able to truly put away. So it stands to reason that facing the end of the world, he would side with the heroes to protect his empire. He takes on a variety of twisted alternate Penguins, ending with a surprising transformation himself. I’ve been enjoying how the villains are getting as much of a spotlight here as the heroes.

Matt Rosenberg is making his DC debut with this John Constantine story—and he has a surprising partner in indie talent Rob Guillory. The art is cartoony and stands out from the rest, and the story is one of the issue’s best. When Constantine meets an evil alternate version of himself, he convinces him to get a drink with him instead. They chat, you almost think this is going to end well—and then the creative team delivers a fantastic and gruesome surprise to end the story. After this, I can’t wait to see what Rosenberg has planned for the DCU next.

Finally, it’s Justin Jordan and Mike Henderson taking on Swamp Thing, as an army of monsters—including Frankenstein and Clayface—march on the castle of the Swamp Thing, a ruthless alternate Swampy who has conquered all the parliaments. This is a melancholy story, much more so than the others, as Alec Holland uses his humanity to break through his counterpart’s defenses in more ways than one. It has some great creature effects in the art, but despite the horror theme it might be the most emotionally compelling story in this volume.

We return to the main story at the end, with an art shift and a focus on Wonder Woman versus the Darkest Knight. While the last line is a little coarse for Diana, the flashbacks to Diana’s first experience with death on an island of immortals are fascinating. I wish we had gotten an entire WW run by these creators after this segment. Overall, another strong anthology with some real standout stories.