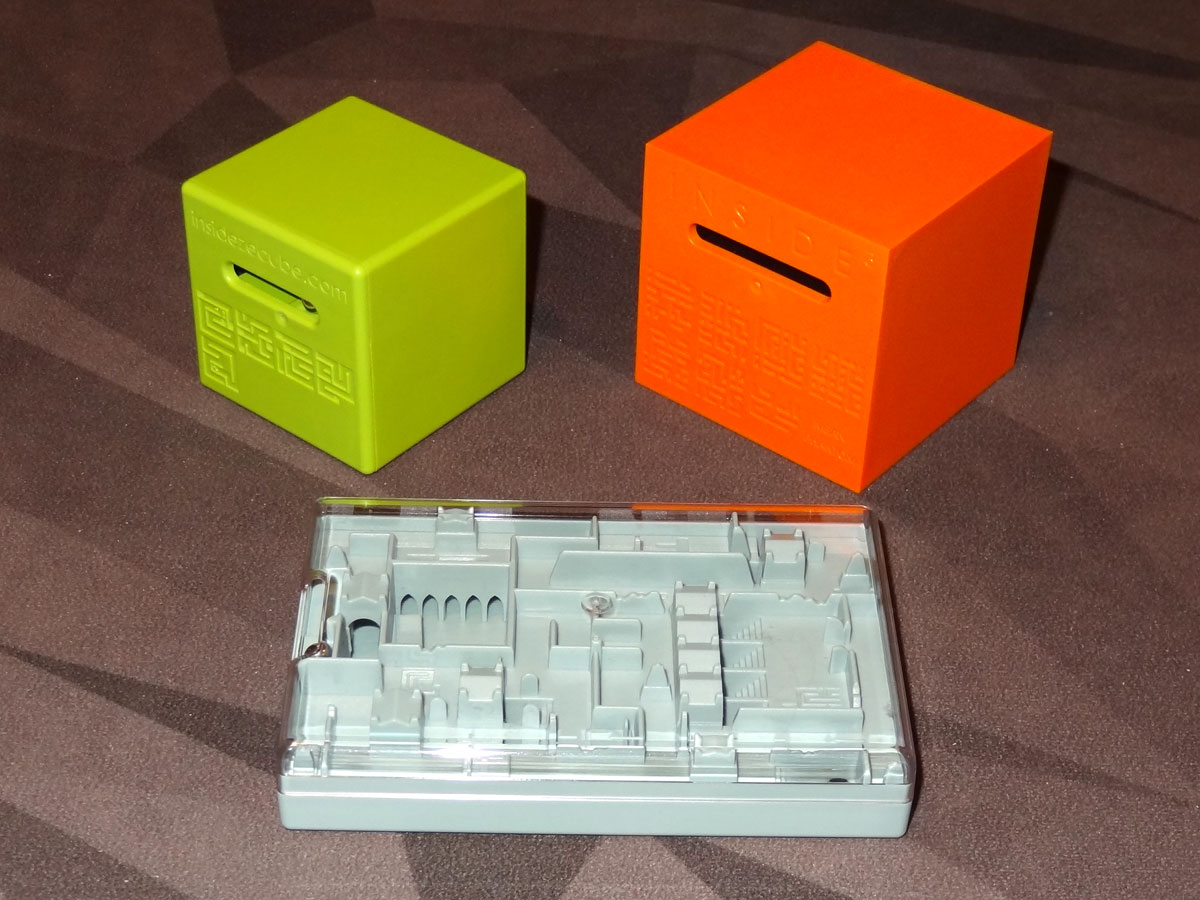 DOuG Factory makes a series of puzzle boxes called INSIDE3: 3-dimensional marble mazes with some devilish twists. I got a chance to try out a couple of the puzzles, and they’re a lot of fun.

The original series features opaque cubes: there’s a small window slot on two sides, and your goal is to get the steel ball bearing from one window to the other, using a combination of feel and sound. There are three types: Novice, Series 0, and Phantom, with several degrees of difficulty within each type.

The Novice series is a good starting point (with difficulties ranging from Easy to Awful). Each cube is 5 levels deep, and there are maps of each level etched onto the front and back faces of the cube. The photo above shows the Regular Novice cube: the map at the top left is the “top” layer, and the window slot corresponds to the icon of the ball and the arrow, showing your starting point. The map at the bottom left is the “bottom” layer, and the “X” indicates your end point, where there is another window on the opposite side of the cube. The deeper squares in the maps indicate where there’s a hole down to the next level.

There are small bumps next to the start and end space that hold the ball bearing in place—you have to slide it past before you can play with it. (I use a pen since my finger doesn’t fit in the window.) Then it’s a matter of tilting and turning the cube to try to get the bearing to the other side. One of the tricks is that you may have to go up and down and back up again through the levels—plus there are some holes that drop you down more than one level at a time. I suppose it may not be entirely accurate to call it a maze, because it’s one continuous path without any branches, but trust me: you can definitely get lost.

Of course, it wouldn’t do to get totally stuck inside if you got lost, right? If that happens, you can pop the lid off, take out the trays, and reset the puzzle. The trays are numbered so you won’t mix them up or get them turned the wrong way. You can see the way the maze works, though it won’t necessarily make it any easier to solve!

The Series 0 cubes are a little bigger, with 7 levels instead of 5, and they range in difficulty from Easy to Mortal—a total of 6 levels. The two hardest levels are permanently sealed and do not open up, and the Mortal version doesn’t even have maps printed on it, so you’re completely in the dark. I suppose that’s a good choice for somebody who wants an expensive rattle, because based on my own attempts, that’s what it would quickly become.

Finally, there’s the Phantom series, which adds yet another trick. These only come in three hard difficulty levels: Mean, Awful, and Cthulhu—and of these, Cthulhu cannot be opened up and has a series of mysterious glyphs in place of maps. I was sent the easiest of the three, and have yet to solve it after trying over the past couple of months. (Admittedly, I haven’t practiced consistently…) The new twist with the Phantom is that there’s an extra ball bearing inside, locked in a small L-shaped passage, so that it can roll back and forth and confuse you with its sound. Of course, you can take the cube apart and remove it if you like—but the maze itself is still pretty difficult.

The Legend series is a bit different: these marble mazes actually do have forking paths and dead ends, and are a little closer to the old marble maze toys I used to have as a kid. However, there’s one particularly significant difference: these have two levels. The top level is visible, but there are stairs and pits that drop you down to a hidden basement.

There are three mazes in this series: the Castle, the Ninja, and the Crypts, which provide three difficulty levels. (A fourth is in development.) These mazes come in a blister pack that has some fun illustrations on the back, depicting the two levels of the maze with a lot of cartoony details. In each of the Legend mazes, you must get from the start to a goal, and then back again. For instance, in the Crypts, you must reach the central chamber to slay the vampire, and then escape the catacombs.

The hidden basement paths are also mapped out on the surface of the maze itself, but broken up into sections. You’ll have to figure out how the map connects to the surface paths and entrances that you can see.

There are also “trophies” to be earned—achievements for completing the maze within a certain amount of time, challenging another player who has specific trophies, or beating the designer’s time. Each trophy has a little sticker that you can apply to the bottom of your Legend maze when you’ve achieved it. (Though you need a good way to keep track of the stickers when you’re still working on it.)

The Legend mazes are a bit easier (at least for me) than the cubes, but they’re all quite fun to play with.

As for why you’d want to fumble around in a blind maze when you’ve been cooped up for a few months? Well, with INSIDE3, at least you know there’s actually a way out of this mess.

I’ve got a little clip here of me working on the Regular Novice cube, as well as escaping from the Crypts:

On the DOuG Factory site, the Legend mazes are 9.90€, and the cubes run from 11.90€ to 18.90€ depending on the type. There are also many bundle packs, in case you’d like to get a bigger set of them. (Note that these are shipped from France, so if you’re in the US, you’ll pay a good bit in shipping.) The cubes are also available at Barnes & Noble retail stores, as well as from Amazon (ranging from around $14 to $30), though currently the Legends series is not available in the US.

For more information about the INSIDE3 mazes, visit the DOuG Factory website.