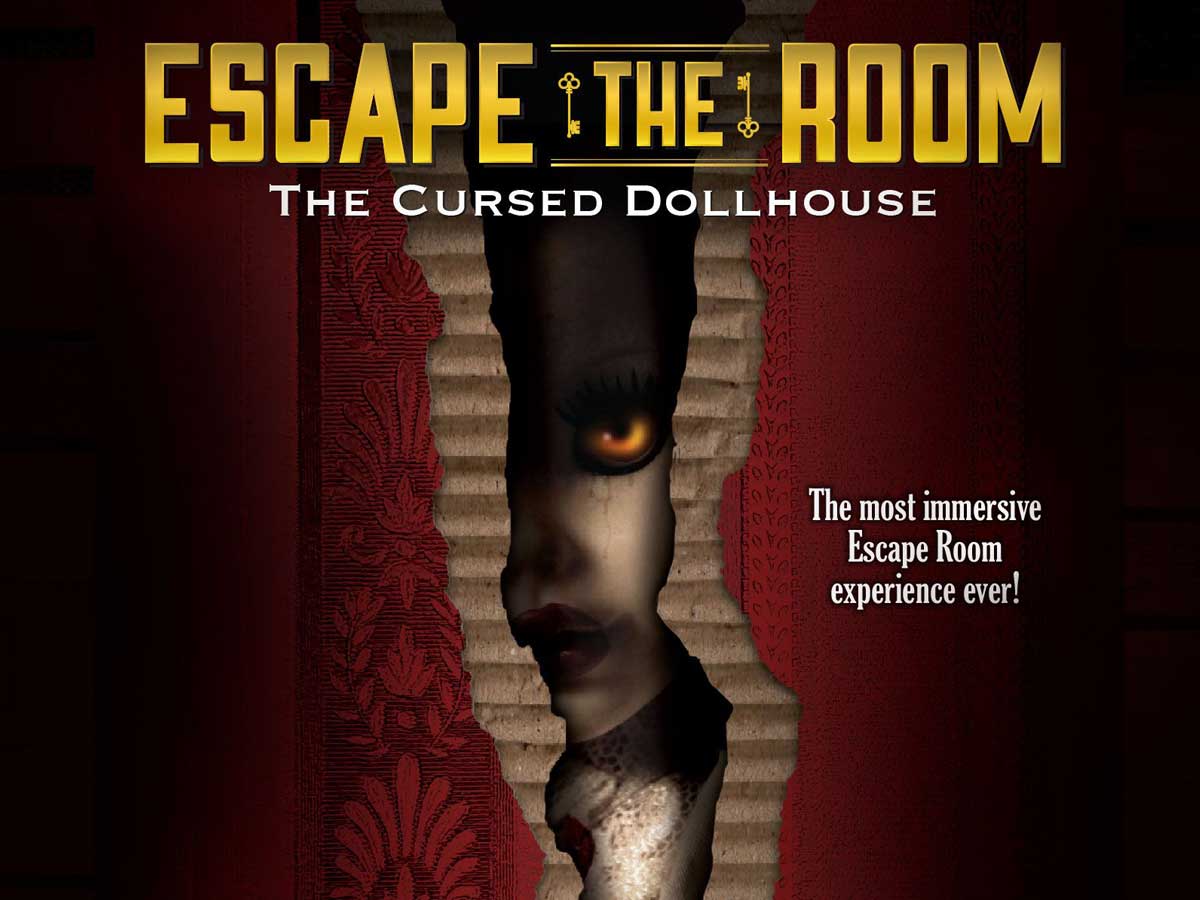 There’s something weird going on in Old Man Garrity’s shed, and it’s time to investigate…

What Is Escape the Room: The Cursed Dollhouse?

Escape the Room: The Cursed Dollhouse is an escape room game that’s suggested for 1 to 4 players, ages 13 and up, and takes about 2.5 hours to play. It retails for $42.99 and will be available in stores on October 1. The number of players is somewhat flexible; there are a number of different puzzles and everyone is working together to solve them, so the only limitation is the problem of “too many cooks.” The game’s puzzles can be fairly difficult to solve, so the age rating is both for the complexity of the puzzles and for the game’s theme, which involves creepy dolls. My 7-year-old sat with us while we played and wasn’t too bothered by the story, but it really depends on the kid (or adult).

Escape the Room: The Cursed Dollhouse was designed by Nicholas Cravotta and Rebecca Bleau, published by ThinkFun, and was illustrated by Monsters Pit.

The game comes with a number of components that are hidden until you discover them over the course of play, so I won’t give you a comprehensive list like I usually do. However, here’s what you do get to see right up front:

The dollhouse is made up of the game box itself, and is cleverly done: the box and lid form the two halves of the house, with a piece that slides across the middle to separate the first and second floors. The attic is formed by three more pieces of cardboard that slot together, and it’s designed to accommodate the size difference between the box lid and box bottom.

The punchboard includes several things to punch out and assemble, and each item indicates what room it should be placed in. There’s a bed in the bedroom, a little dining table in the kitchen, and an unassembled stack of planks in the living room. In addition, there’s a creepy porcelain doll and what looks like a pin with a skull on it.

The envelope includes various paper components—these aren’t a secret, since you’ll set them out in the various rooms as well: a rug, a quilt, a couple of dolls, and an envelope made to look like a chest.

Along with these components, there are various things that are already attached to some of the rooms—some paintings on the walls, cabinets, a refrigerator, and a shower curtain. Don’t open these before you play the game, but there are more goodies inside!

The solution wheel is made of cardstock and has several rotating discs. When you’re attempting to solve a puzzle, you rotate the discs to line up three symbols with the yellow puzzle icon (blurred out in the photo above). Then you slide the blue dial so that it “unlocks” and opens the windows. If the puzzle icon appears in at least two of the windows, you’ve solved the puzzle correctly.

This dial is a bit of an improvement over the original Escape the Room dial, as seen in Mystery at the Stargazer’s Manor. The old dial didn’t have the lock switch, so as you were turning the dial, you might catch glimpses of icons rotating through the windows. The lock lets you shut the windows so you don’t see solutions spin past. However, I’ll note that the lock slides back and forth easily, so depending on which direction you spin the blue disc, sometimes it comes unlock when you don’t want it to. I found that it made sense always to rotate the blue disc counterclockwise to keep it locked until you’re ready to reveal.

The game is designed to be played once, because then you’ll know the solution to the puzzles. Some of the paper components do get cut/torn during the course of the game, but there is a way to print out replacements and set it up so that you can allow another group to play. Without spoiling anything, I will say that I was pleased with the quality and variety of components included—it’s primarily cardboard and cardstock, but they were used creatively.

You’ll see some more photos throughout this post, but the illustrations are creepy, with little sinister details you’ll spot if you take a closer look.

How to Play Escape the Room: The Cursed Dollhouse

The rough premise is that you wind up magically inside a dollhouse, where a porcelain doll starts talking to you and asking you to help her. The goal of the game is to work your way through the rooms to solve the mystery of the dollhouse and escape.

The instructions tell you where to put all of the components in the envelope: the chest and nesting dolls in the attic, the quilt on the bed, and so on. You’ll want to have some paper and pencil handy in case you want to take notes for solving puzzles, and access to the internet in case you want to look up hints (or use ThinkFun’s recommended playlist). A timer is not required, but there’s a suggested 2.5 hour time limit.

The instruction manual includes a story that tells you how you ended up in the dollhouse, and you must solve puzzles to move from room to room, checking your solution with the solution wheel in order to progress. If you succeed, the book tells you which room to go to next.

There’s a variety of different types of puzzles to solve; sometimes it’s obvious what to do, and sometimes you’ll have to look around carefully for clues. In each room, you’ll need to figure out the three symbols—red, green, and blue. Again, sometimes it’s obvious which puzzle is for which color, but not always. The other trick is that sometimes there are puzzles or parts of puzzles in a room that aren’t needed right away, so you might have to remember them for later.

The game ends when you get through all of the puzzles and solve the mystery—or when you run out of time. (Though, let’s face it: you want to finish the puzzles even if your timer runs out.)

Why You Should Play Escape the Room: The Cursed Dollhouse

I really enjoy escape room games, so I’m always eager to try out a new take on them. These days, of course, my family really wants an escape into a different room, because we’ve been stuck in close quarters for so long, so piling into a cursed dollhouse seemed like a treat.

There’s a growing catalog of these games, like Unlock, Exit, and Deckscape, all of which have slightly different approaches to the genre. For many of these play-at-home games, it can be harder to simulate the physical escape rooms with their gadgets and gizmos, but ThinkFun’s Escape the Room line includes some inventive ways to give you a bit of that physical puzzle feel using mostly cardboard and paper. The Cursed Dollhouse is the third and most elaborate so far in the line, using the box to simulate the house itself, and while it may be a little gimmicky, it does work.

One of the limitations of playing an escape room game at home is that you don’t get the elaborate built environments: you get an image of a room, perhaps a story describing it, but it can still be hard to feel quite as immersed when you’re sitting at your table looking at a small card. The dollhouse is a nice way to have that physical representation of your surroundings, even if it’s in miniature. In this case, the story actually puts you in a dollhouse, but I think this sort of structure would be fun to use even if the story didn’t shrink you down.

One thing that I found particularly effective was the fact that several items are already set up when you open the box. For instance, you can tell the refrigerator door can be opened (it’s held shut with a clear sticker), but you don’t know what’s inside it until you get to that point. It’s fun to have that feeling of walking into a room and not knowing what’s behind the curtain (even though you did have to assemble and place a few of the things yourself).

As with most escape room games, the number of players is somewhat flexible. Sometimes it can be handy to have more brains to help solve a puzzle, but if you have a lot of players there can also be some competition over who gets to do what. My kids sometimes argue over who gets to work on a particular puzzle, so we try to divvy them up somewhat so everyone gets a chance to try different things out.

One downside to an escape room game is that you can only play it once (unless you have a very short memory and can forget all the solutions). I appreciate that ThinkFun provides reassembly instructions online so that you can put everything back in place for another group. It may be a little trickier in this case, though, because many of the items were stuck to the walls using the little glue dots or clear stickers, and we didn’t keep all of those aside to reuse them—I’ll probably have to make do with tape instead.

The story itself wasn’t a huge draw for me. I’m not much for horror in general, and none of my family was particularly excited about the creepy dolls, so our enjoyment of the game was despite the theme. The writing in the story was okay—not really scary, but with a sort of ominous dread—and we did manage to guess some of the twists in the story before they were revealed. It would probably be more effective with a spooky soundtrack and the lights turned down low.

Still, even though we didn’t care for the theme as much, we all enjoyed playing through the puzzles, and felt it was a well-made game. There were some challenging puzzles to figure out, and we did end up relying on the hints a bit (especially in the kitchen) when we got stuck. The hints system, which will be on ThinkFun’s website, uses a progressive system so that you don’t get the whole thing revealed right away. Instead, you get little nudges: did you look in here? What does that remind you of? Look a little more closely at this detail… It gives you a push in the right direction to see if you can figure out the rest yourself, but you can access the entire solution by the end if you’re really stumped.

If you enjoy escape room games, and especially if you enjoy creepy living dolls, check out Escape the Room: The Cursed Dollhouse! It’s a bit heftier than the two previous titles in the series, both in its physical size and in the gameplay—the box itself is about twice as big, and the puzzles are both more numerous and, at times, more challenging. It would make an excellent choice for a Halloween-themed evening!

For more about Escape the Room: The Cursed Dollhouse, visit the ThinkFun website. 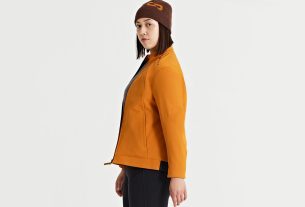 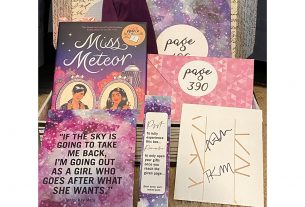