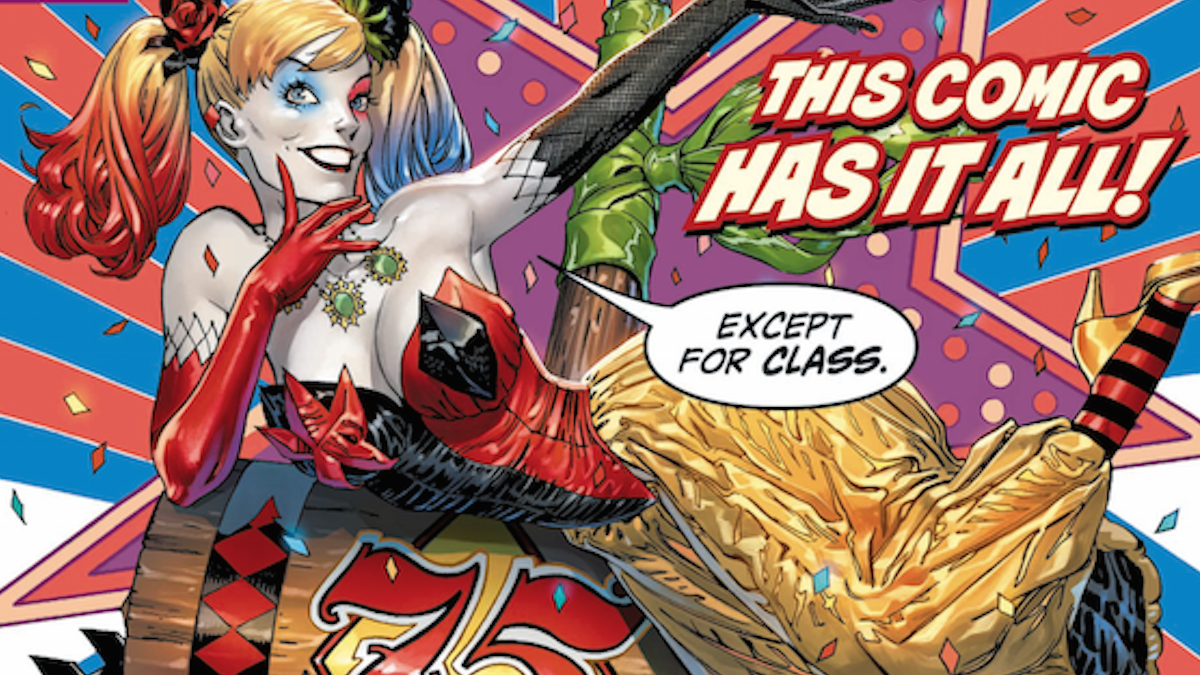 Ray: It’s a jumbo-sized jam issue to wrap up Sam Humphries’ run on Harley Quinn, and he’s brought along an all-star cast of artists to finish things off. It all starts in a fittingly surreal way—with Harley waking up at her birthday roast hosted by a living Bernie the Beaver and attended by hundreds of alternate versions of her. This leads to all sorts of bizarre asides, starting with a story where Harley is a member of the Justice League and proceeds to horribly botch a mission against a giant Russian robot. Next up is a weird story featuring the entire supporting cast from multiple runs, including Poison Ivy, that all seems to be centered around something called “Butt Nuggets.” But Humphries always has more going on than appears, and much of this story seems to be framed by Harley refusing to celebrate her birthday—likely because she doesn’t want to confront what she’s lost over the course of this run.

Ramon Villalobos gets to take on one of Harley’s other affiliations—the Suicide Squad—in a short story that has her terminally screwing up the Presidential line of succession. It’s funny, ultra-violent, and has brilliant art, but doesn’t seem to really sync up with the themes of the rest of the issue. The next issue has a lot more meat to it as we flash back to Harley’s childhood and see how the death of a childhood pet affected her. By this point, it’s pretty clear we’re just spending some time in Harley’s subconscious, with guest-appearances by the people who meant the most to her and who she’s still trying to say goodbye to. Joe Quinones, one of the best artists in the business, gets to draw a strange story that serves as a tribute to Harley’s Batman: TAS era, and he’s a fantastic choice—even if the punchline is Man-Bat in a Harley costume. That’s what this issue is like. It’s full of bizarre, surreal visuals, but always comes home to deliver a powerful emotional punch.

Not connected to the main story but still significant is the epilogue story pitting Harley against Punchline, with art by Riley Rossmo and a script by Humphries. Set after Harley had her throat slit by Punchline, it features the debut of Harley’s deranged guardian angel and some strong flashbacks to the times she pushed back against the odds. This is a twisted, bloody story, but oddly optimistic. And so ends Harley’s latest title after a very strong run by Humphries. Whoever follows him has a huge task ahead of them, because this is the second defining Harley run.