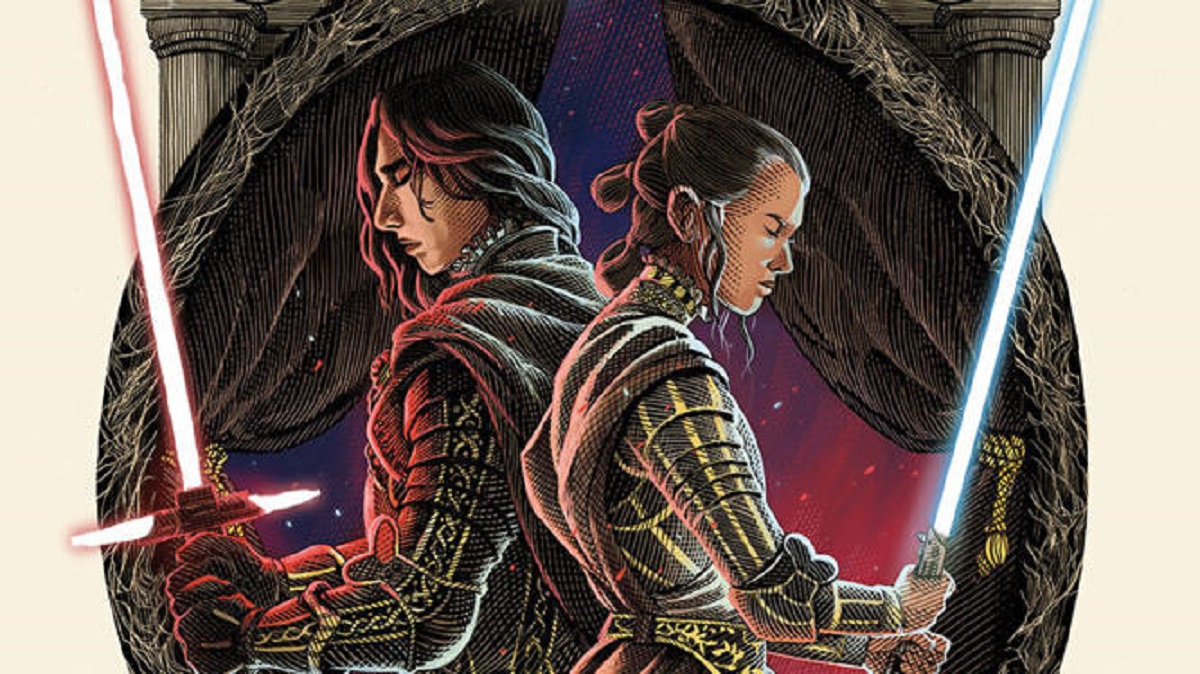 As a fan of The Big Bang Theory, I enjoyed watching Dr. Sheldon Cooper attend a renaissance faire while dressed as Mr. Spock from Star Trek. I remember thinking what a great fusion of geek cultures. Shortly thereafter, a friend of mine who teaches high school literature introduced me to a series of books telling the story of the original Star Wars trilogy written in iambic pentameter. Could this new fusion of two worlds, old and new, be any more geeky? I loved the retelling of the classic movies in a new format. Now the series finishes the Skywalker saga with its latest release, William Shakespeare’s The Merry Rise of Skywalker: Star Wars Part the Ninth.

What is The Merry Rise of Skywalker?

Ian Doescher is the author of the Pop Shakespeare series which includes titles such as Get Thee…Back to the Future as well as Much Ado about Mean Girls as well as the William Shakespeare’s Star Wars series. In each of these books, he writes the story from popular movies as if the master storyteller himself here writing them. Doescher penned his first Star Wars novel back in 2013 as he covered the first movie of the series in Star Wars: Verily a New Hope. This was followed by The Empire Striketh Back and The Jedi Doth Return. The prequel trilogy was covered next in The Phantom of Menace, The Clone Army Attacketh, and Tragedy of the Sith’s Return. Finally, he began finishing the series with The Force Doth Awaken and Jedi the Last. The final book in the Star Wars series, The Merry Rise of Skywalker, provides a new take on the latest Star Wars movie. The book is published by Quirk Books and distributed by Penguin Random House. It is available in both hardcover and digital editions and can be purchased at your local bookstore as well as several online sellers including Amazon. com. The suggested retail price for the hardcover edition is $14.99.

In The Merry Rise of Skywalker, readers are treated to the story of the return of Emperor Palpatine who was last seen falling to his death in Return of the Jedi at the hands of Darth Vader. Kylo Ren, who is now the Supreme Leader of the First Order, seeks to find this shade from the past who threatens his leadership. Meanwhile, members of the Resistance, Rey, Poe and Finn, fight to stop the tyranny of the First Order. Written as an Elizabethan drama, The Merry Rise of Skywalker literally reads like a Shakespearean play complete with authentic meter and verse as well as monologues and dialogues. The text even includes line numbers along the right margin of the page.

The book, or should I say play, is divided into five acts. Just like Shakespeare’s plays, The Merry Rise of Skywalker is written with lines for each character as well as stage directions. In fact, these stage directions describe what is going on such as “Kylo Ren boards his TIE whisper, plugs the wayfinder in, and travels to Exegol, planet of the Sith.” Since many readers are not fluent in Shyriiwook, the footnotes contain Editor’s translations of Chewbacca’s lines into Basic. Woodcut style illustrations also help readers to visualize the play with many characters wearing Elizabethan era clothing and Chewbacca with a puffy hat complete with feather.

StarWars.com published an exclusive except from Act 1, Scene 1 which can be found here.

Why should I read The Merry Rise of Skywalker?

As a big Star Wars fan, I was at the first showing of The Rise of Skywalker on opening night and even preordered the novelization of the movie so I could read it as soon as it was released. So even though I knew the storyline, I thoroughly enjoyed reading The Merry Rise of Skywalker. It is fun to read another take on the story with which the reader is most likely familiar. In fact, knowing the story already makes The Merry Rise of Skywalker more enjoyable. What I really liked were the soliloquies throughout the book. These provide a deeper understanding of what the characters are thinking in their own words. While these thoughts might have been inferred during the movie, it is enlightening to actually read their thoughts. For example, right at the start of the play while he is searching for the wayfinder on Mustafar, Kylo Ren gives a half page soliloquy  describing his plans to make both Palpatine and Rey, his perceived rivals, bend the knee to him as he rules the galaxy. Rey’s inner thoughts are also explored in the same way and the conflict within herself is well portrayed as she is pulled back and forth between the light and dark sides of the Force. In fact, the play format focuses more on the dialogue between characters and monologues to the audience to develop the story rather than the action and special effects found in the movie. In other words, this would be the stage play version of the movie.

Mixed in with serious dialogue are several comedic breaks. Be sure to read the translations of Chewbacca’s lines down in the footnotes. They are often hilarious as the grunts and growls are transformed into Shakespearean English. For example, as Rey, Poe, Finn, and Chewbacca are preparing to depart to search for a wayfinder, Chewbacca shares, “tis well to venture forth with thee again–Our band complete, an escapade at hand.” When fighting stormtroopers on Pasaana, Chewbacca yells out, “Destroy the knave. Yea, let him taste our wrath!”

I highly recommend The Merry Rise of Skywalker for Star Wars fans who enjoy delving deeper into the storyline of the movies. The way the book is formatted like a play, which really makes it as if Shakespeare himself wrote it, may not be for everybody, especially those unfamiliar with the works of the great playwright and poet. However, for those who have a great appreciation of both Star Wars and Shakespeare, The Merry Rise of Skywalker is truly a unique treat. After finishing this book. then go back and read the previous episodes eight.

Review: In Prodigy, Marie Lu Follows up her YA hit Legend

GeekDad Interview: Kermit and Walter From The Muppets