Ray: The most surprising part of this issue is that it’s Josh Williamson writing it and not Tom Taylor, because it fits perfect into recent developments in Suicide Squad. Taking place immediately after the events of #5, it focuses on what happens to the unwitting instigator of the whole affair – Digger Harkness, aka Captain Boomerang. The constant thorn in the Flash’s side was nearly executed by Lok for revealing the Squad’s existence, but a rebellion by the team saved him. So where did he go then? Well, apparently into the custody of agents with ties to Ted Kord, but it’s not as simple as that. As he’s interrogated for information on the Squad’s whereabouts, he weaves a tall tale – the name of the annual – that paints him as the epic hero of a wild race for survival that teams him with the latest Task Force X and Flash against a souped-up Deathstroke in a battle tank. It makes sense in context.

Digger being the “hero” for this issue is a clever twist, because it’s obviously inspired by the greatest Australian action movie of all time – the epic Mad Max series. Deathstroke’s armor and weapons are more over the top than usual, and much of his dialogue makes clear this is all being seen through Digger’s eyes. Flash is more incompetent, and even seems to get killed off at one point. But neither Flash nor Deathstroke are the real target of Digger’s schemes, and this is little more than an elaborate cat and mouse game between old villains and new. Williamson does a great job with the new Squad, many of whom have barely been explored yet, but I wish maybe a little more had been done with fellow Australian Thylacine. The ending of the issue is a nice touch, with Flash finding an alternate way to deal with Captain Boomerang that calls back to the friendlier relationship Flash has with some of his villains. Another great issue. 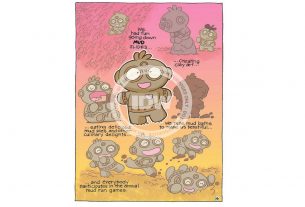