Ray: James Tynion IV’s run has been a never-ending thriller that turns Gotham into a battleground, and Batman #91 is no exception.

The action is split this issue, with the hero on one side and the antiheroes on the other, and both plots are excellent. The main action takes place with Batman fighting Deathstroke on a series of high-altitude obstacles, and even though this issue has an odd jam-issue feel to it with three artists, the visuals are spectacular. This is Deathstroke’s first major role since his fantastic solo series ended, and while I don’t think there’s nearly as much nuance to the character, he’s written well here. He’s essentially an amoral merc with no desire to do more damage than necessary but determined to fulfill his contract. And Batman, pushed far closer to the edge than he usually is, is willing to take things just as far to stop him. It ends in a spectacular bit of brinksmanship that shows how Batman feels about his own role in Gotham City’s current state.

Things are much more dark and dirty for Selina and Harley, who are working together and manning an army of drones to help Batman out. Selina revealed the truth about her involvement with the Designer last issue, and we haven’t gotten to see Batman’s response yet. But it seems pretty clear she’s not expecting it to be good, and Harley – as always – has her own unique suggestions. Selina is trying to stay one step ahead of the Designer, to accomplish her mission to protect Bruce before the Designer can ruin him. Harley is hilarious, but there’s a real sense of tension to Batman #91 that comes off every page.

A prelude involving Joker is more genuinely creepy than most scenes involving the evil clown. This time Punchline is only seen as a voice on the phone, but I doubt that’ll stop this issue from being another sensation. Joker War is getting all the hype, but Tynion is coming out of the gate on this title as strong as Snyder did. 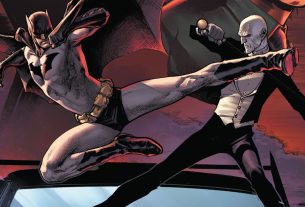