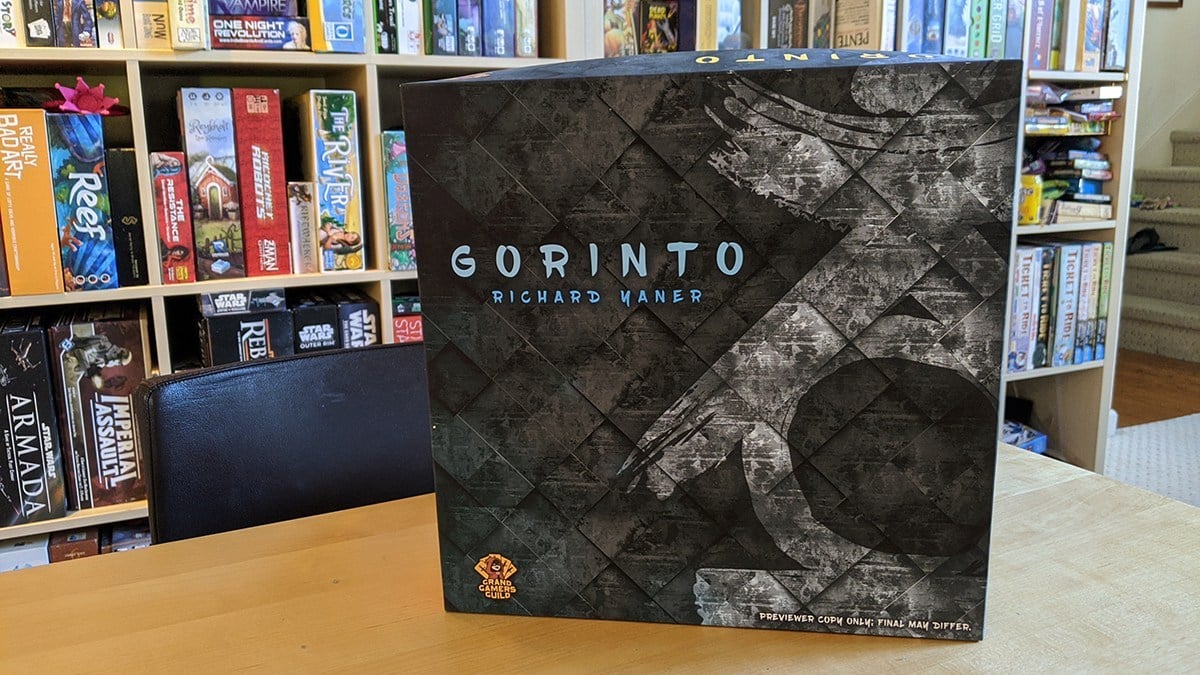 Gorinto is a game for 1-4 players, ages 10 and up, and takes about 30 minutes to play. It is currently seeking funding on Kickstarter, and a pledge of $35 will get you a copy of the game. You can check out more details of the game on its Kickstarter page.

The components are very well designed, even at this prototype stage, but then I’ve come to expect that from games from this publisher.

Both of the main boards–the game board and the scoreboard–are well laid out and contain enough visual clues to assist you during play that you won’t have to go back to the rulebook. The same isn’t true for setup, though, and I do hope that they consider adding small clues to the game board to help create the mountain before publishing the final game. The prototypes of both of these are on thick cardstock, but I assume the final versions will be done in heavy cardboard.

The player mats are likewise well laid out. They are very simple, containing only the spots for the five elements you’ll be collecting through the game and a small band along the bottom for the player color, but I appreciate that they contain only the exact amount of information they need, with nothing extraneous added that would create confusion for new players.

The element tiles in the prototype are small wooden tiles painted the appropriate color with stickers for the elements. The final version will be plastic chips that stack better, but honestly I’d be fine if I bought the game and saw these. They are, like everything else in the game, simple and clear, which not only fits the overall theme of the game, it also eliminates confusing extras.

Note that the dragon tiles are only included in the slightly pricier Master edition of the game.

Likewise the goal cards. The twelve cards are divided into four sets: eight are pairs, indicated by letters A-D in the bottom corner. These cards have goals that either conflict with each other or simply wouldn’t play well together, so the instructions tell you to draw a new card if you get both of any lettered card. The remaining four cards work no matter what, and so do not have the letters.

The key element cards are a set of five where each card simply shows one of the five elements in the game, and provide an additional scoring opportunity at game’s end.

The season marker is without a doubt the collest piece in the game. It’s a big, maybe 2″ tall, 3D printed temple. I’m definitely looking forward to seeing what the final version of this piece will look like. Like with the dragon tiles, the 3D model of the season marker will only be in the Master edition; the Retail edition will have a punchboard marker.

Finally, there are a set of four player tokens, which are standard round wooden discs, and a starting player coin, which will be a real metal coin in the Master edition and a cardboard token in the Retail edition.

The goal of the game is to collect the most wisdom (element tiles), according to the four goals laid out for the game, by the end of the fourth season.

First, place both boards on the table next to each other. Place the season marker on the first spot of the season track (located on the scoreboard).

Second, dump all of the tiles into the bag and give them a good shake. Then, draw tiles randomly and build up the mountain. The default “Peak” landscape has two tiles on each of the squares around the border, then sets of three tiles on the inner ring, and four on the middle space. Again, I’d ideally like to see these numbers printed on the board itself, but that’s a minor quibble. Also worth noting: the rules do have a few other suggested layouts, but the Peak is the one to start with.

Third, ten more tiles are drawn at random and placed along the path, which wraps around the top and left sides of the board.

Finally, each player selects a color and takes the matching player mat. They put their wisdom markers next to the starting spot on the scoreboard. Randomly select a starting player, give them the coin, and you’re ready.

The starting player begins by selecting any tile along the path–the ten tiles on the top and left sides of the mountain–and moving it in a straight line onto the mountain. The tile can be moved any number of spaces and can be placed either on top of an existing stack or on an empty space.

Then, the player collects tiles off of the mountain based on the type of element of the tile they moved. The number and location of the tiles depends on a combination of the number of tiles the player has already collected of the same type as the one they moved–what the game calls “understanding”–and the type of element played. The only really important rule to know at the outset is that the tile the player moved can never be collected by that player.

The “understanding” each player has of an element is based on the number of tiles of that type they have already collected. As they move and get new elements, they are stacked on their player mat. For each element, a player’s “understanding” is one more than the number of tiles they have collected. In the image above, the player has two Void tiles, three each of Wind and Earth, one Fire, and zero Water. So, their “understanding” of Void is three (two tiles plus one), Wind and Earth is each four, Fire two, and Water one. (Water here is the reason for the “plus one” part, so even before you have collected any tiles (say, the beginning of the game), you have some “understanding” of things and so can pick up new tiles.

This “understanding” is the total number of tiles a player can in theory collect from the mountain when they move. Again, referring to the image above, if that player moved a Void tile, they would be able to pick up a total of three tiles, as that is their “understanding” of Void. They could collect four tiles if they move Wind or Earth, two if they move Fire, and one if they move Water.

It’s important to remember as well that players must collect as many tiles as they are allowed. If you’re “understanding” of Wind is four, you have to pick up four tiles when you move Wind. The only exception to this is if the player is unable to collect the maximum number because there aren’t enough tiles to be picked up. It just can’t be your choice.

The tiles you pick up will be from a pattern determined by the element you are moving. Void tiles allow you to pick up tiles from stacks in the four corners diagonally adjacent to the spot to which you move. Wind tiles allow you to pick up from the four orthoganally adjacent tiles. Fire allows you to pick from any spot in the same column as the place where you land, and Water does the same, but from the same row. Earth allows you to pick tiles from the same stack, but keeping in mind the rule that says you cannot pick up the tile you moved itself.

This might seem a bit confusing at first, but there’s a diagram printed on the board that shows each of these patterns, which is great since it means you don’t have to keep going back to the rules or a reference sheet or something like that.

At the end of the season, all players simultaneously score their player mats based on the goal cards. This is the key strategic element in the game, as it should be dictating how players choose what to move and collect. Both goal cards are scored, but neither Key Element card (those are only scored at the end of the game.)

Once scoring is finished, there’s a quick reset phase for the next season. Any remaining tiles on the path are discarded from the game, and then 10 new tiles are drawn from the bag to reset the path. Note that the mountain itself is never reset. The season marker is moved, and the first player coin is passed to the player with the lowest score, and a new season begins.

The game ends at the end of the fourth season. At that point, the goal cards are once again scored. (Also of note: the goal cards are not reset each season–you use one set of goal cards for the entire game.) After the goal cards are scored, you score the Key Element cards, which are all the same: score 2 points for each tile you have collected in each of the two indicated elements.

Why You Should Play Gorinto

Gorinto, in fitting with its theme, is beautiful in its simplicity. It’s a game that can be taught in just a few minutes, and played in about a half hour. Yet in that simplicity is some real strategic depth: do you go for the move that will net you the most tiles, or do you collect fewer tiles but get a key one you’re missing? Do you try to balance the two goals for each season, or work towards the end goal of collecting the key elements?

The surprising thing we discovered in playing the game was that the scoring system is designed so that all of the players will tend to stay pretty close. There were a few times when it looked like one of us might pull out to a big lead after a season, but that usually ended up not being the case, and even when it did happen, the next season tended to see the scores tighten again.

This is one of the those games where I’m bummed to have to be sending the prototype on to another reviewer, so I won’t be able to play it again for quite some time. But I also know from their previous titles that the final product will be something to behold, and I definitely look forward to that. Another unique thing: Gorinto’s Kickstarter campaign is being run without a bunch of stretch goals and the like. They’re simply going to focus on producing the best possible product. It has already reached its funding goal, so you can know going in that this game will get made, and I’d suggest that you join me in backing it. I don’t think you’ll be disappointed.

For more information or to make a pledge, visit the Gorinto Kickstarter page! 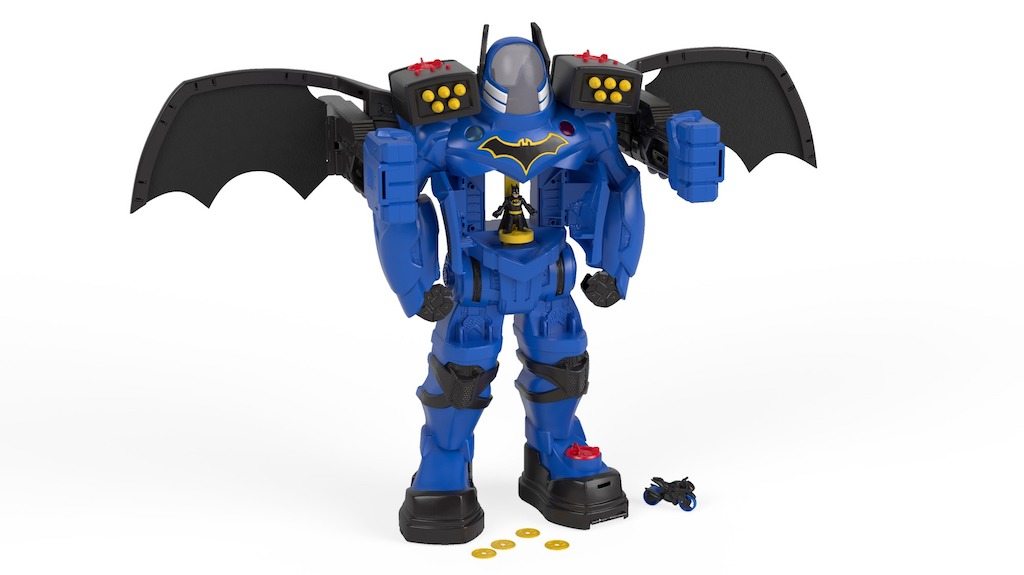