Ray: Gotham City Monsters #5, the penultimate issue of this horror-themed miniseries has done what few comics are able to – take a group of C-to-Z-listers and make them a compelling team. Killer Croc has been a mainstay in DC books for a while, hanging out on the Suicide Squad, but most of the other misfits and monsters here haven’t played a major role since 2017.

Despite that, Steve Orlando has called back to some of DC’s most acclaimed comics like Grant Morrison’s Seven Soldiers epic to take a war of monsters to Gotham. Much of the strength of this series has been in Orlando’s original character, Red Phantom (not to be confused with the similarly-named Red Cloud, who can also turn into a dangerous red mist). Despite his monstrous alter ego, this character has a powerful backstory as a murdered gay man who became the resident ghost of Gotham’s theater. Seeing him get to break free for the first time in a century and be the hero is the emotional core of the series.

The main plot in Gotham City Monsters #5 is strong, but not quite up to the level of earlier issues because it’s setting the stage for the finale. Melmoth has kidnapped some of Gotham’s teachers for a dark ritual that will let him regain his full power and it’s a race against time to track him down in Slaughter Swamp.

Amancay Nahuelpan, always a strong artist, has probably his best showing of the run with horror-themed segments in the swamp that remind me of Kelley Jones in places in the best way. The showdown between two groups of monsters set up last issue is a great set piece with a surprising amount of gore – this book takes its horror license seriously.

But in the middle of that is a surprisingly human story that focuses on some characters like Lady Clay as they make the choice to embrace their humanity. But in the cliffhanger, one character seems to make the opposite choice, and that betrayal sets up what’s sure to be a strong final issue.

Disclaimer: GeekDad received a review copy of this issue.

Review – Exit Stage Left: The Snagglepuss Chronicles #6: To The Cartoons 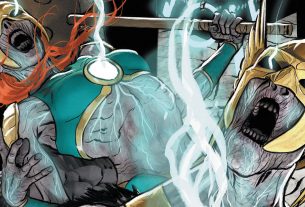