Ray: Batman: Detective Comics Annual #3 is all about the relationship between Alfred and Bruce Wayne.

The death of Alfred Pennyworth is not a storyline I’m happy DC has decided to go with, but I can’t say that the execution so far hasn’t been excellent.

More fallout will be explored in the upcoming Pennyworth RIP one-shot, but so far the most in-depth look has been in Detective Comics Annual #3 by Pete Tomasi and a pair of artists. It smartly looks forward by looking back at the life Alfred lived before he has Bruce’s father and partner in protective Gotham. His time as a Member of MI-6 has been explored before, particularly when Scott Snyder and his partners on Batman: Eternal brought Julia Pennyworth back into canon. This issue introduces a new player in that era, Marigold Sinclair – Alfred’s spy handler and apparently part-time lover. The issue kicks off with a tense James Bond-inspired escape as Alfred steals documents from a fake American city deep in Soviet territory and is extracted in a series of daring stunts.

In the present day, Bruce has let the Manor slip into a state of disrepair – a physical manifestation of his mental despair – when he’s surprised by a visit from a much older Marigold, who needs his help to clear up one of the loose ends from Alfred’s spy history and apprehend a traitor.

The second half of the main story is more of a traditional spy caper, as Batman and his new partner take on an enhanced Soviet super-killer and a scheming traitor. But Sumit Kumar’s art is perfect for the story, and the issue adds some great context to Alfred’s past and potentially a new supporting character and ally for Bruce’s mission.

The backup, drawn by Eduardo Risso, may be even better. It’s a day-by-day look at Bruce’s first week as Batman, through Alfred’s eyes as told in a series of letters to Marigold. As a tribute to Alfred, it’s an expertly done issue. It also serves as a reminder of how many layers there were to one of comics’ best supporting character that can’t be expanded on anymore now that he’s gone.

Well, for now. It is comics. 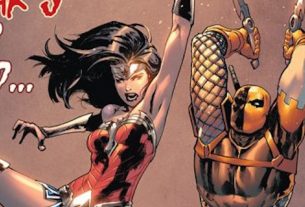