Ray: I wouldn’t want to be anyone doing a high fantasy comic right now, given how spectacular the Jason Aaron Conan the Barbarian run is, but Last God #2, an original tale from Phillip Kennedy Johnson and Riccardo Federici has done enough to distinguish itself in two issues with a fascinating tale of betrayal and monsters.

In a kingdom built on lies, the King Tyr and his stern wife (who often rules in his stead) are at the center of a cult of personality based on Tyr’s slaying of a dark God decades ago. But as the end of last issue revealed, that God is far from dead – and it has taken Tyr and converted him into one of its demons. Last God #2 smartly divides the narrative into two segments, each marked by an insignia that gives away whether it’s a segment of the current kingdom, or a flashback to the first time Tyr encountered these demons. And uniting them both are some of the best and most horrific visuals I’ve seen in a comic in some time, as Federici’s painted art brings demons from our nightmares to vivid life.

The present-day segments focus on the mad flight of the Queen and her allies from the Kingdom as the thing that used to be her husband destroys his legacy, while they get an unexpected assist from the mysterious slave who she sentenced to the pit in spite of his victory last month. Her hatred for this young man is a puzzle that’ll likely be unraveled over the course of the issue, but it doesn’t get any better when he saves her life this month.

The Tyr segments chronicle his first meeting with the creatures, as they take someone close to him and pursue him and some fellow survivors through the forest. The story is rather dense and still revealing all its secrets, but the main appeal of this issue is the stunning monster visuals. It takes some real creativity to be able to shock in a horror comic anymore, and these monsters are unlike anything else in comics. This is billed as only book one of a larger saga, and I can’t wait to see what Black Label’s first long-form project has planned for us. 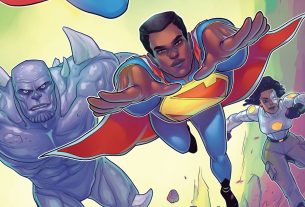 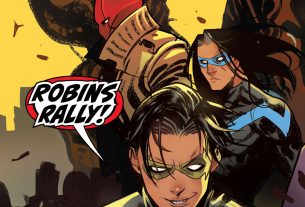