Ray: In the aftermath of the disastrous previous issue that saw Djinn sealed in her ring by a vengeful Roundhouse and Damian’s characterization further ruined – revealing he was responsible for the death of an innocent girl and was virtually remorseless about it –Teen Titans #36 is mostly about the ugly fallout.

Roundhouse is locked up in one of Damian’s private prison cells as Wallace and Emiko come in and yell at him, while Damian obsessively seeks ways to free Djinn. That leads him to Djinn’s evil brother, as spoiled in solicits for the upcoming Djinn War storyline. But the big plot development here has nothing to do with them – it’s all about Crush, who has found herself at the mercy of her evil father. As part of his deal with Lex Luthor, Lobo’s gained the ability to use their linked DNA to control Crush’s actions and force her into becoming a remorseless killer like him.

And that’s really the big problem here, isn’t it? Lobo. Remorseless killer. Even if you take away Steve Orlando’s excellent characterization (on the furthest end of the spectrum from his version) Lobo has been at worst a cold-blooded hitman and mercenary who is just looking to make money and enjoy himself in the dirtiest areas of the galaxy. He’s never been a sadistic monster who enjoys torturing and killing children.

The glee with which he forces Crush to brutalize her friends is another distressing scene in a book that mostly seems to care about how much trauma it can put its lead characters through. By the end of Teen Titans #36, it seems we’re about to see the reveal of the identity of Goth Leviathan, aka The Other, but he’s been such a side note to this story that it barely matters. We’re not invested in the plot, we’re not invested in likable character, so what’s driving this book? 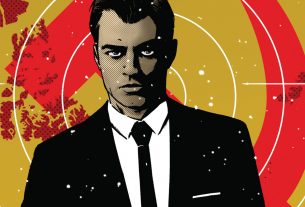