Ray: I’m still not a fan of the general direction of this storyline, turning Oracle into a mad robot out to destroy Batgirl for abandoning her, but Batgirl #41 is definitely the best issue of Cecil Castellucci’s new run.

That’s because it takes its cues from one of the best Batman stories of all time, No Man’s Land. The Oracle AI has taken over Burnside, cutting the borough off from the rest of Gotham and unleashing an army of AI tech searching for anyone connected to Batgirl. When we last left off, Barbara Gordon had been beaten by her enemy and sent plummeting into the river below with only a small breather to keep her alive until she makes it to the surface. That leads to a brilliantly tense segment that puts us inside her head as she climbs to the surface slowly but surely.

I feel like this segment would have been much more effective if it was done unbroken, not cutting away frequently to catch up with other characters.

Those other characters include the Terrible Trio, one of whom has been assimilated by Oracle and are currently hunting down Barbara’s former allies – starting with Operator, aka Frankie Charles. Frankie was the best addition to the series during the Burnside era, and I’m glad to see her again, but any time a long-missing supporting character comes back to play a big role in the fight against a deadly villain, I get antsy.

I was also glad to see Leslie Thompkins, who has ties to Barbara going back years and is able to help save her when she emerges from the water barely alive. Less thrilled to see Jason Bard play a major role, as his redemption arc feels half-done and his whole routine of wanting to redeem himself in Barbara’s eyes while hating Batgirl feels half-baked. Overall, it’s definitely getting better but I’m looking forward to seeing what Castellucci does once she’s out from under this storyline. 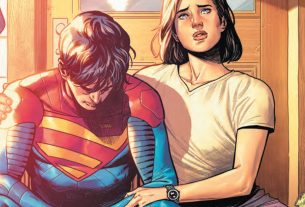