Ray: Batman: Nightwalker has had an odd journey to the original graphic novel (OGN) shelves of your local bookstore – it’s a story featuring a comic book character, based on a novel, that has been turned into a graphic novel.

The story by Marie Lu (adapted into a comic by veteran comic writer Stuart Moore) is the first DC novel to get this treatment, with stories featuring Wonder Woman, Catwoman, and Nightwing yet to come. I haven’t read the novel, but I was worried that a comic adapted from one would be too talky and feel like a translated book. So I was pleasantly surprised that this graphic novel is a seamless, high-speed adventure and one of the best OGNs to come out of DC’s new initiative so far.

Not only is it a great Batman story, it’s a great Bruce Wayne story – one of the rarest things in comics.

Like all of the DC Ink and Zoom books so far, this takes place when an iconic superhero was a teenager. Set on Bruce Wayne’s eighteenth birthday, it introduces us to the world of the popular but lonely boy billionaire. Lu smartly broadens the world of Bruce Wayne by exploring an era of his life we’ve barely seen, and gives him an expanded social circle – including abused rich kid Harvey Dent, whip-smart teen Dianne, and resentful Mayor’s son Richard Price.

Lu and Moore’s Bruce is the right mix of barely-restrained anger and teenage confusion, and it’s interesting to see him interact with a younger Alfred Pennyworth and Lucius Fox – both trying to find the right balance between mentoring him and training him to be their boss in the coming years as he comes of age and takes control of his empire.

The main threat in this book is the Nightwalkers, a shadowy terrorist group targeting Gotham’s wealthiest citizens, robbing and murdering them for their supposed crimes against the city. While many in the city support them as they target the criminal wealthy, they’re becoming more indiscriminate in their attacks.

Bruce isn’t Batman yet, but he’s getting ready and he can’t keep himself from trying to track down an escaped Nightwalker gang – leading to a police chase, a multi-car pileup, and an arrest record for the boy billionaire. He’s kept out of jail thanks to a plea deal, but winds up with a community service sentence to be served under the supervision of the hard-nosed Detective Draccon (another original character, and another nice added dose of diversity in Gotham) – to be served mopping floors at the notorious Arkham Asylum.

This is obviously before Arkham was filled with freakish rogues, but it’s still a dangerous place overseen by the eccentric Warden Zoe James. This abnormally strong woman has no problem manhandling her inmates, and the book keeps an ambiguous tone about whether she’s a force for evil or just trying to keep the place under control. But she’s not the resident of Arkham who intrigues Bruce the most. That would be Madeline Wallace, a teenage member of the Nightwalkers who has been apprehended and wastes no time cozying up to Bruce, spinning tales for him of her tragic past and feeding him intel that may help him track down the terror group.

As the plot unfolds, it becomes clear Bruce is becoming enmeshed with this dangerous killer – a pattern that has repeated itself many times over the course of his history.

I don’t want to give away too many plot points from this excellent OGN, beyond saying that there’s many twists, turns, and betrayals along the way. Although Bruce isn’t Batman yet, you clearly see the foundations of his quest and of much of his gear.

The action sequences towards the back half of the story are some of the best I’ve read in a Batman book in some times, probably because the stakes feel higher with a young, untrained Bruce pre-Batman. Madeline is also a great foil for Bruce, with a story that parallels his – or so it seems – and a talent for manipulation. The book keeps you guessing as to her true motivations until the last page, and while a few twists in the last act come a little too fast without the impact needed, I can’t imagine this isn’t going to satisfy almost any Batman fan looking for a tale of the character from an unexplored period.

Review – Doom Patrol: Weight of the Worlds #1: A Surreal Start 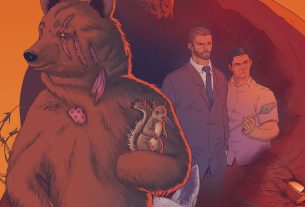